The squadron attacked the battleship a second time -a mast height attack by moonlight. The enemy defences were ready however and Lane's Halifax was hit repeatedly as he attacked at an altitude of 150 feet. Flak smashed into the aircraft's main spar and there was concern the aircraft would break apart but he managed to return to base. Four other Halifaxes were lost, including that of W/C Don Bennett who evaded to Sweden to eventually become the commander of the Pathfinder Force.

On another operation Lane returned with 120 holes in his aircraft's fuselage and wings.

Reg participated in two "Thousand Bomber Raids," the first to Cologne on May 30, 1942 and the second to Essen two nights later. By the end of June and at the age of only 22, the "fair haired young man with the ready smile and friendly manner" was already a veteran and was awarded the Distinguished Flying Cross. The citation reads,


"This officer has carried out a total of 23 operational sorties involving a total of 137 flying hours. Targets attacked include Berlin, Hamburg, Cologne (3), Mannheim, Bremen (3), two daylight raids on the Scharnhorst and Gneisenau at Brest, and two low level attacks on the German battleship Tirpitz in Aason Fjord at Trondheim. These attacks were carried out from a height of 150 feet (on consecutive nights) *actually they were four weeks apart -in the face of intense opposition from the battleship and gun batteries on both sides of the fjord.

Flight Lieutenant Lane's tour of operations has proved to be one of steadfast determination to reach his target. The operational work of his crew has been outstanding for the accuracy and consistency with which it has been carried out. His skill as a pilot and his coolness under enemy fire and also in bad weather conditions has inspired his crew with extreme confidence and made him a captain who is of outstanding value to his squadron.

For this record of fine service, courageous devotion to duty, and his unquestionable fine qualities of captaincy, Flight Lieutenant Lane is strongly recommended for the non-immediate award of the Distinguished Flying Cross.

The completion of his first tour of operations during the summer of 1942 coincided with the formation of the Pathfinder Force and No. 35 Squadron was one of six chosen to operate within what was to be known as No. 8 Group. Throughout the winter of 1942-1943 he attacked targets in Berlin, Stuttgart, Munich, Milan, and Turin and his tenacity and courage continued. During the final operation of his second tour on April 16, 1943, his Halifax was "coned" by searchlights and he had to dive to 1000 feet to escape heavy anti-aircraft fire over Frankfurt. 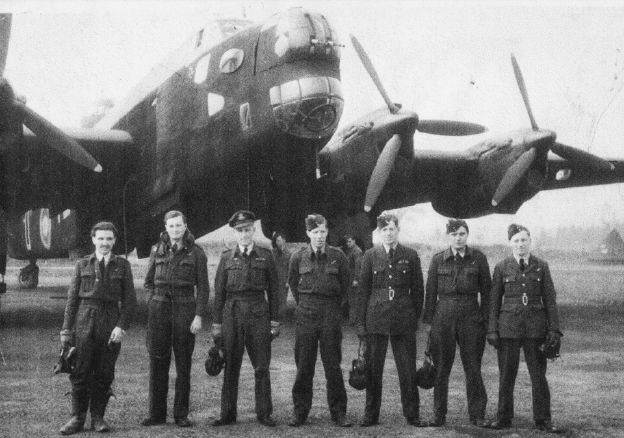 
Numerous No. 35 Squadron crews had been lost but Reg Lane, the "amiable, soft-spoken Canadian" kept coming back and seemed able to handle the strain of operational flying better than most. After eighteen months of continuous operations, Lane was awarded the DSO (Distinguished Service Order) with the citation,


Squadron Leader Lane has been engaged in operational duties for a long period and over a wide range of targets. His missions have been marked by unvarying success. As a flight commander, Squadron Leader Lane has rendered most valuable service and his leadership and example have been inspiring to all the aircrew with whom he has come into contact. This officer has recently been on operational sorties to such targets as Berlin, Stuttgart, and Munich and by his courage and devotion to duty has achieved many outstanding successes.

The departure to war of the first Canadian-built Lancaster on August 6, 1943 was a huge media event with the now-legendary Lorne Green providing coast-to-coast radio coverage. Lane recalled that he was, "not given the opportunity to flight-test KB700" and when he settled into the cockpit he found that the engine instruments were not working. He felt that, "In front of all the workers, officials, and media it would have been an un-mitigated disaster not to take off. As well it would have had an adverse effect on morale." The rest of the controls seemed fine so he started the engines and took off to the cheers of thousands. He landed in Dorval, near Montreal, but it was another month before the "Ruhr Express" actually made it across the Atlantic.

After delivering KB700, S/L Lane returned to the PFF Navigational Training Unit but during the winter of 1943-1944, and after only four months off of operations, S/L Lane was given command of No. 405 Squadron, the Canadian Pathfinder squadron formerly commanded by Johnny Fauquier, and began his third tour. He was often assigned to be the "Master Bomber" during major Bomber Command Raids, arriving over the target prior to the main force and then circling as the raid developed, broadcasting over a special frequency to the other aircraft and making adjustments as the raid developed. During the "Battle of Berlin" he circled the city for up to 40 minutes while directing a main force of more than 500 aircraft and being under ceaseless attack from German night fighters.

With his promotion to Group Captain at the age of 24, Lane flew his 65th and last operation just prior to D-Day as master bomber on a raid to Caen. Following this he was awarded a Bar to his DFC, the citation reading,


Group Captain Lane has completed many attacks on heavily defended targets in Germany. He has constantly displayed a fine fighting spirit throughout his operational career and has proved himself an officer of outstanding ability whose courage, cheerfulness and keen sense of duty have been an inspiration to his crews.

Reg left No.6 group at the end of 1944 to become part of the planning team for "Tiger Force" that was to be the combined British/ Canadian/ Australian force to attack Japan. Reg was getting on a bus to travel to the airport to fly to Okinawa as part of the advanced party when the first atomic bomb was dropped. Soon afterwards the war in the Pacific ended and "Tiger Force" was no longer required. 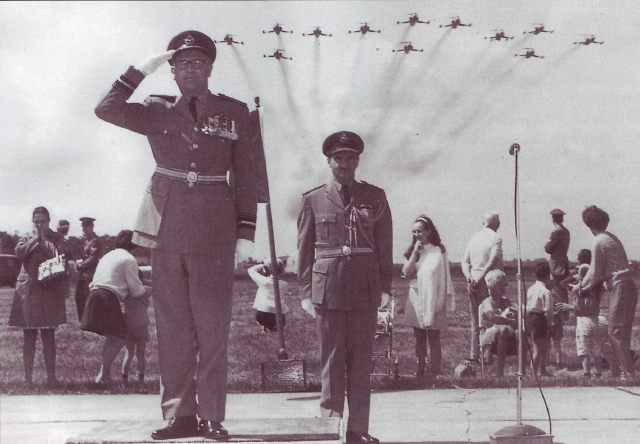 
Reg remained in the air force following the war, serving as Deputy Commander in Chief of the North American Air Defence Command (NORAD) prior to his retirement with the rank of Lt. General. 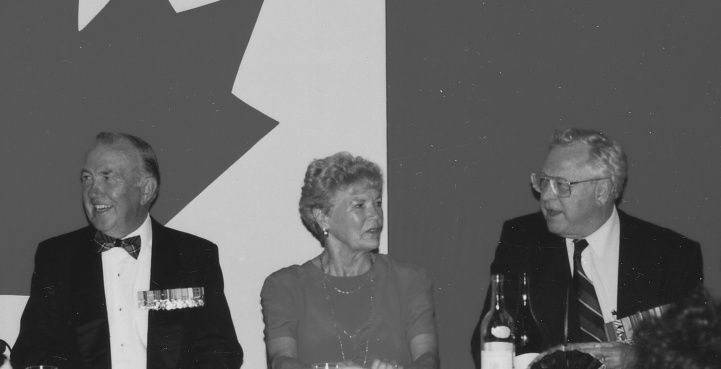 (l-r) Duke Warren, Melba Warren, and Reg Lane
at the Official Opening of the Nanton Lancaster Air Museum (now the Bomber Command Museum of Canada) in 1992. 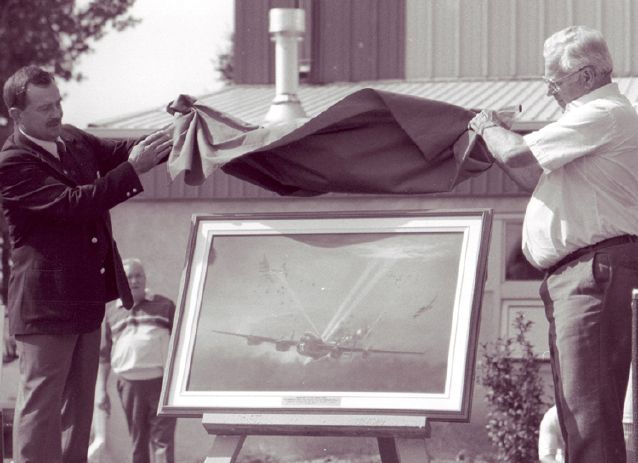 Dan Fox, NLS President and Reg Lane (right) unveil the painting at the "Salute to the Pathfinders" Event in 1994.