Hamish Mahaddie  -DSO DFC AFC
- A Horsethief for the Pathfinders


Born in Scotland in 1911, Thomas Gilbert "Hamish" Mahaddie joined the Royal Air Force in 1928 and spent the first three years of his career being trained as a metal rigger. In 1933 he was posted to the RAF base at Hinaidi, near Baghdad. The following year his quest to be accepted for aircrew training was successful and he earned his wings at No. 4 Flying Training School in Egypt flying Avro 504N's. During his two year posting to No. 55 Squadron, he acquired an Arabian horse that he named "Hamish." His fellow pilots pointed out that he (Thomas Gilbert) bore a distinct resemblance to the horse and assigned him the nickname "Hamish."

Hamish flew widely in the Middle East and took part in various social functions with the local Arabs. During one of these, Hamish recalled, "I was offered the eye of a sheep that had been cooked on a vast platter. We all sat around cross-legged picking at bits of the sheep and I was offered the eye by the Sheikh, which I understand was a kind of honour. Whilst I took it, I was about to flip it away somewhere when my C/O said, 'You must eat it, YOU'VE GOT TO EAT IT!' under his breath. How I put that eye in my mouth and how I swallowed it I will never know, but swallow it I did. The things we do for England!"

Mahaddie returned to England in 1937 and soon began flying Whitley bombers with No. 77 Squadron. In September 1939, he was piloting the Whitley on wartime operations that included reconnaissance flights, leaflet raids over Germany, attacks on coastal targets, and in May 1940, Hamish flew raids designed to slow down the enemy blitzkrieg of France, completing a total of 23 operations between 9 May and 29 June.

Hamish was then assigned to No. 19 Operational Training Unit in Kinloss, Scotland as an instructor where he continued flying Whitleys and rose to the rank of Squadron Leader over the next two years and was awarded the Air Force Cross (AFC) -a non-combat award that Hamish referred to as the, "Avoiding Flak Cross."

Mahaddie's second tour of operations began in August 1942, flying the huge four-engined Stirling with No. 7 Squadron. In October he began Pathfinder operations with the elite group that marked the targets in advance of the arrival of the main bomber force. A raid on Frankfurt on 3 December was his fiftieth operation. Then, over the period of only eight weeks and following his promotion to Wing Commander, he was awarded a second AFC, the Distinguished Service Order (DSO), the Czechoslovakian Military Cross, and the Distinguished Flying Cross (DFC). The various citations included phrases such as, "consistently attacked heavily defended targets with coolness and determination often in adverse weather," "powers of leadership of a very high order," and, "unflagging enthusiasm has had an inspiring effect on his comrades."

Undoubtedly, Hamish's closest call came on a raid to Cologne on the night of 1/2 February, 1943. After releasing his target marking flares, the cloud cover that had been providing some protection broke up and flak damaged the Stirling's intercom system and put the rear turret out of action. At the same time a Ju-88 night-fighter raked the fuselage with cannon fire from a range estimated to have been eighty yards. The mid-upper gunner, wireless operator, and bomb aimer were all injured, all the compasses and navigational equipment were destroyed with the exception of the astro-compass, and the aileron controls were severed.

Somehow, second pilot Thompson was able to provide navigation bearings back to base while Flight Sergeant Stewart treated the wounds of the three injured crewmembers. "Meanwhile," according to Bob Pointer, the rear gunner, "the skipper was fighting with the aircraft. Having had the aileron controls badly mangled by the cannon shells he could only fly the aircraft by varying the power of the engines. Jock, our engineer -clambering in the wing root with a torch -did some very good work with pieces of wire he had conjured up from somewhere that enabled the skipper to gain partial control of "C" Charlie and set course for home."

A count the next morning revealed that, as Hamish described it during his visit to Nanton, he had suffered, "174 cannon shells up his kilt."

Hamish completed his operational tour with the Pathfinders during March, 1943 upon which he was promoted to Group Captain and assigned to No. 8 (PFF) Group Headquarters to become "Group Training Inspector" for PFF commander Don Bennett. This role included recruiting crews for the Pathfinders from operational squadrons whose commanding officers were not particularly interested in having their best crews recruited. Hamish became notoriously successful at this, referring to himself as, "Don Bennett's Horse Thief" and it is in for this that he is best remembered.

As "Group Training Inspector," Hamish regularly visited operational squadrons, giving lectures to four hundred or more aircrew on the changing tactics and techniques employed by the Pathfinders. But before visiting a station, Hamish would have already identified crews that he felt were candidates for the PFF by studying aiming point photographs that indicated which crews were dropping their bombs accurately on the targets.

S/L Bazalgette had attended a lecture given by Hamish at which he was introduced to the methods utilized by the Pathfinder Force. Not satisfied with his assignment to No. 19 O.T.U. at Lossiemouth, Scotland, Baz was, according to Hamish, "one of many tour-expired bomber pilots that seemed to rot in our O.T.U.'s." He recalled that Baz, "plagued me weekly with letters and telephone calls beseeching me to take him back on operations. Hamish's answer was always, "You just stay there (at the O.T.U. at Lossiemouth, Scotland) and I will get you out." "This wasn't just an idle promise," Hamish insisted, "because there was the type of fellow that I wanted to be a squadron commander eventually."

Mahaddie's final assignment during the war was as Officer Commanding RAF Warboys, the airfield that was the home of the PFF Training Unit.

After continuing to serve in the RAF until 1958, Hamish went on to enjoy a successful career as an aviation consultant, one of his most noteworthy projects being the gathering of an extensive collection of aircraft to be used in the classic film, "The Battle of Britain."

Lt. General Reg Lane, former commanding officer of No. 405, the Canadian Pathfinder Squadron, recalled, "Hamish had a fabulous personality -an extrovert of extroverts. He could charm anybody. I got to know him when he was at No. 8 Group Headquarters and I used to see Hamish frequently. Anyone who's met Hamish Mahaddie will never forget him." 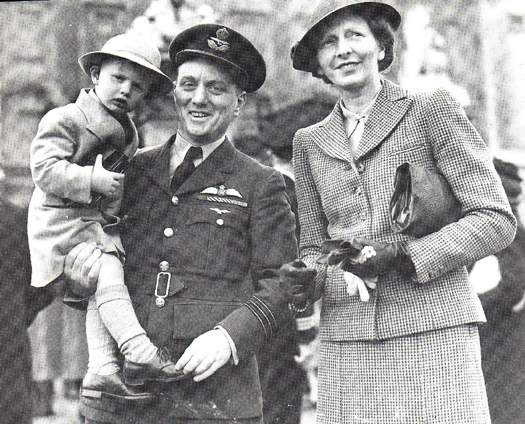