Edward Weyman "Teddy" Blenkinsop was born in 1920 in Victoria, British Columbia and attended school in that city before articling as a Chartered Accountant with a Vancouver firm. When war broke out, he enlisted in the Royal Canadian Air Force at Victoria in June, 1940 and trained as a pilot-navigator. He was posted to No. 425 Squadron in 1943 and flew Wellingtons in North Africa. Upon completion of his first tour he volunteered for a second tour with No. 405 Squadron of the Pathfinder Force.

The painting (below) depicts a point in the raid shortly after S/L Blenkinsop DFC had dropped his markers and was about to be attacked by an enemy fighter. The Master Bomber and commanding officer of the squadron, W/C Reg Lane DSO DFC and Bar recalled: "The operation was completed and I instructed Blenkinsop to head home. Moments later I saw the flash of an aircraft blowing up. I realized at once it was Blenkinsop's because the bright colours of his target indicators came dripping out of the explosion. When I returned to base, I reported that he had been killed."

Teddy Blenkinsop's Lancaster had been shot down by German night fighter ace Hermann Greiner but incredibly Blenkinsop had survived although the remainder of his crewmembers had not. He was picked up by the Belgian Underground and obtained papers that enabled him to pass as a Belgian national. However while in Meensel-Kiesegem the German Gestapo captured eighty members of the local Resistance including Blenkinsop. He was held at St.Gilles Prison in Brussels and while detained transmitted his identity to an American officer POW by tapping in Morse code over steam pipes.

F/Sgt Joseph William Murphy, a New Zealander flying as a wireless operator with No. 75 Squadron RAF, was shot down on 19 July, 1944. He eventually found himself in St. Gilles prison in Brussels where he met Teddy Blenkinsop. In a statement recorded by the RAF, F/Sgt Murphy recalled, "S/L Blenkinsop, whom I met about 1 September, 1944, said that while evading capture in Belgium he was helping the White army. One day he was with a group of them on the way to blow up a house occupied by the Germans when they ran into 200 Gestapo men armed with machine guns. He fled into a wood, being unarmed, and was captured by the Germans. He had not done any sabotage. He was threatened with torture but refused to speak. Three of the Belgians, after torture, did reveal their plans and said Blenkinsop had been implicated. On this evidence the Germans said they would shoot him. Whether this was done or not I could not say, but he was not evacuated from St. Gilles prison with the 40 odd British and Americans at he beginning of September, 1944. At the time of our meeting, S/Ldr Blenkinsop asked me to relate this part of his story to our Intelligence if I got back safely to the U.K."

It is thought that Blenkinsop was then sent to work as a forced-labourer in a factory in Hamburg and may have spent time in Bergen-Belsen. Teddy Blenkinsop died 23 January 1945 in a concentration camp at Neuengamme due to heart failure following torture, beatings, forced labour, starvation, and various other inhumane depravations and sufferings in Neuengamme Concentration Camp, twenty kilometres east of Hamburg.

S/L Blenkinsop was awarded the Distinguished Flying Cross and the Belgian Croix de Guerre 1940 with Palm. Blenkinsop Road in the City of Victoria is named in his honour as is Blenkinsop Islet on the B.C. coast.

The painting, by prominent Canadian aviation artist John Rutherford of Kamloops, British Columbia, was commissioned by the Nanton Lancaster Society and depicts a "moment in time" during the Montzen Raid. The aircraft in the foreground is No. 405 Squadron Lancaster (LQ-S) flown by S/L Blenkinsop. The enemy fighter is a JU-88. The aircraft banking in the upper portion of the painting is another No. 405 squadron Lancaster (LQ-V) and is being flow by W/C Reg Lane.

Teddy Blenkinsop's biography, "One Who Almost Made It Back" by Peter Celis is thoroughly researched and highly recommended. The museum is pleased that Mr. Celis selected our John Rutherford painting to be on the cover. 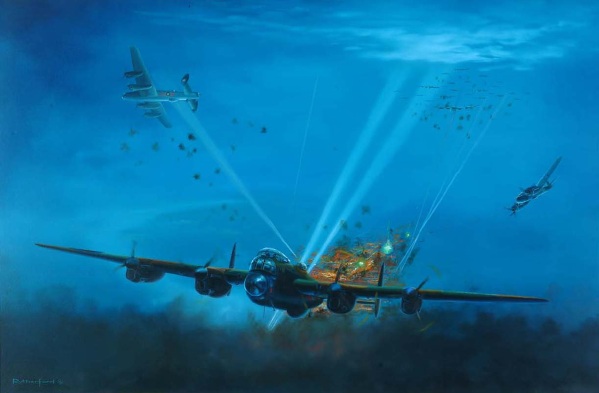