The Story of The Last Mission of RAF Lancaster KB834 of RAF 434 Squadron
Along With Over 18 Preserved Stories of Amazing WWII RAF Aircrew Survival
Can Be Found In Author Ian Darling's New Book Release:
"Amazing Airmen - Canadian Flyers In The Second World War" 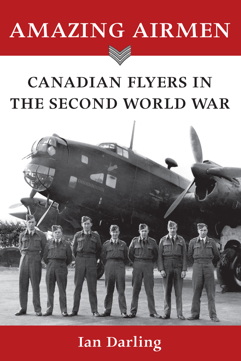 During the second world war on March 11th 1945 the end was near for Nazi Germany as the allies were driving Hitler's forces of evil into forced retreat throughout what once was the Nazi's occupied fortress Europe. Seeking to cut off the vital German supply lines 1,079 allied aircraft, 750 Lancaster's, 293 Halifax's and 36 Mosquito's of all Royal Air Force bomber groups departed for a dangerous daylight operation on the industrial city of Essen Germany. This mission is recorded historically as the second largest bombing attack of the second world war surpassed only by the 1,108 RAF daylight plane attack on Dortmund on the following day March 12th. It was also one of the few daylight bombing missions the RAF was to have participated in. The enormous numbers of allied aircraft that were involved in this operation was reported by Air Force veterans who took part to be some eight miles long and some five miles wide. 4,661 tons of bombs were dropped on H2S navigational radar directed sky markers through complete cloud cover. The attack was accurate leaving Essen virtually in ruins until the American 9th Army took control over the city on April 10th 1945. This was the last RAF bombing mission on Essen which had been attacked many times in the early years of the war with such disappointing and costly results.


The preserved story of The Last Mission of Lancaster KB834 of RAF 434 Squadron begins on the morning of March 11th 1945 as KB834 was prepared for this Essen daylight operation by Royal Air Force ground personnel at it's airfield base at RAF Croft England for what was to be it's final fateful mission. Lancaster aircraft were built in both England and Canada and KB834 was an Mk X Lancaster identifying that it in fact was manufactured at the Victory Aircraft Plant near Toronto in Malton Ontario Canada. Some 430 of these models were built there with the first KB700 having been completed on August 1st 1943 and flown to England by S/L Reg Lane DSO DFC on September 15th 1943.


The crew were all Canadian commissioned officers serving with the Royal Canadian Air Force except the Flight Engineer 37 year old P/O William Jones from Liverpool England who was serving with the Royal Air Force. He had served previously in 419 Squadron and was serving on his first tour. The rest of the crew were all serving on their second tours. This was a significant accomplishment for these airmen as RAF bomber losses in WW2 were staggeringly high with records indicating bomber command having suffered 51% casualty rates. 434 Squadron in fact was known as the unlucky squadron for having had far higher casualty rates than the other squadrons.

Their primary mission objective on the Essen bombing attack was to destroy the railway supply yards and railway lines in the industrial heart of Germany the city of Essen to try to prevent the transfers of munitions and materials to the German war front by enemy rail cars. RAF records state Essen was second only to the capital city of Berlin in terms of total allied bomb tonage dropped during the war.

The shell that hit KB834 also blew out all of the cockpit windows of the trailing Lancaster that was following about 100 feet behind and 50 feet above as reported by it's crew upon returning safely to base at RAF Croft.

Two Russian men who were very likely working in the fields as POW forced labourers seen the airman parachute to the ground and rushed over to his aid. F/O Marceau was badly injured in the legs shoulders eye and face and they helped the wounded Canadian by using his first aid kit to dress his wounds. He then gave them his two survival kits that he was carrying as he wanted the men to keep them knowing that his capture was soon at hand as he could see that three German soldiers were running towards them from a distance away. When the soldiers arrived they immediately searched him three times over for weapons and documents. Present was a sergeant who was searching for a pistol but he could not find a gun as he was not armed. The sergeant then took both survival kits away from the Russian men and the other two German soldiers who were about 15 years old picked F/O Marceau up and walked him about 1 kilometer back to their flak post, all the way the older sergeant was kicking him from behind in the legs. However he was not further injured by this mistreatment as he was protected by his heavy flying boots.

After arriving back at the Germans flak post he was released which somewhat surprised him. Feeling exhausted and in severe pain he sat himself down against a fence and found it quite odd that the German soldiers were staying away from him as if frightened. Perhaps they in part were sensing that the day of reckoning was near for Germany. A wooden stretcher was later brought to about 10 feet of where he was sitting and feeling really faint he got up and laid himself down on top of it. He was then picked up and placed in the back of a German troop transport truck onto the floor in between 2 rows of German soldiers. One of the soldiers began trying to remove his wedding band. Now at the point of falling into unconsciousness the last thing he could recall was clinching his left hand so his ring could not be taken from him.

Later that day he awoke only very briefly on the operating table in the hospital rooms of the German flak barracks where he would then remain unconscious until the 16th of March. After regaining back into consciousness he was then interrogated by a German flak post officer who asked him "The names of your crew and where are your other four crewmembers?", apparently not knowing that Lancaster's did carry seven airmen. My research of records indicates that this same German flak post officer after the war did provide information on this aircrew and KB834's crash site to the Royal Air Force. On March 20th the area of this hospital was bombed and he was walked across the street to yet another hospital but the roof of that one was soon on fire as well and he had to be moved again.

During this time as an injured POW F/O Marceau thankfully credits Dr. Otto Trush the commanding officer of one of the hospitals he was being treated in with possibly saving his life as a very determined SS officer named Captain Schmidt identified him as an allied airman and attempted several times to try to have him released into the custody of the German Vermarcht. This hospital officer was able to prevent this from happening by arguing against it by stating that the Canadian airman was not fit to be transferred by the SS.

After the war F/O Marceau remained in hospitals for treatments of his injuries for a lengthy period of time. He flew 11 missions with the Fern Crew and 47 missions in total in WWII during two tours of North Africa and Europe. At this time June 2005 Ben Marceau lives peacefully today in Montreal Quebec Canada serving as the treasurer of 425 Squadron Association.

The days and weeks following March the 11th when the Fern Crew did not return home from this mission to Essen were an extremely emotional period of time for the families as they were unsure whether any of the crewmembers had survived the explosion and crash of Lancaster KB834. It is my hope that they discover and learn more about their story here. Individual memorials to the Fern Crew can now be viewed online at Veterans Affairs Canada The Canadian Virtual War Memorial
[ https://www.veterans.gc.ca/eng/remembrance/memorials/canadian-virtual-war-memorial/ ] 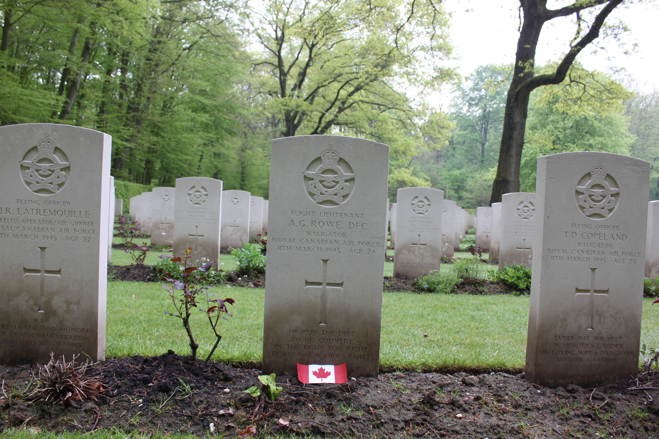 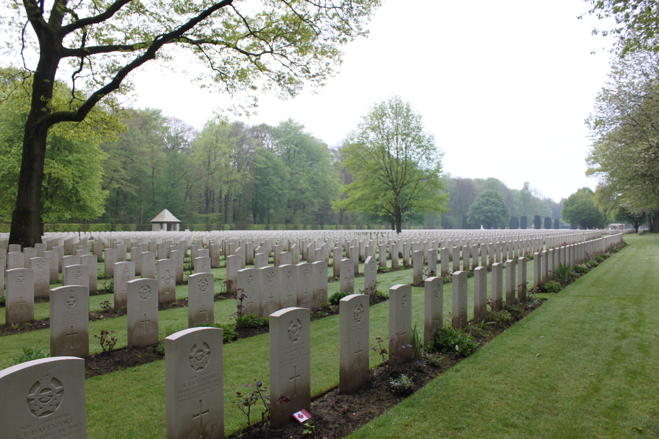 Buried Together Here In This Row Are The 6 RAF Airmen of RAF Lancaster KB834.
Photographs Taken By Veterans Affairs Canada May 2015
During Filming of The 70th Anniversary of VE Day Ceremonies
Held At Reichswald Forest War Cemetery Near Kleve Germany.

Thank you to those who contributed to this story. To Veterans Affairs Canada, To Ben Marceau RCAF who passed away December 10/2008 for his recounting of these events. To Bill Baluk RCAF 431 Squadron veteran who flew on this mission. To William Calver Canadian Navy veteran and RCAF researcher. For photographs, Veterans Affairs Canada, Harry Jones - England, Fred Carter - Canada, Adrian van Zantvoort & Hans Ooms - Holland. To the Bomber Command Museum of Canada for hosting this chronicle and for their dedication to the memory of RCAF Airmen. Special thanks to "Amazing Airmen - Canadian Flyers In The Second World War" author Ian Darling.


Chronicle Tribute Researched & Written By Rick Thomson:
My Mother Pearl Thomson Was Married To RCAF F/LT Navigator George Rowe. After WWII She Married John Thomson My Father Who Was A WWII D-Day Veteran Who Served With The RCEME The Royal Canadian Electrical Mechanical Engineers. In Total 9 Members of My Family Have Served In Combat With The Canadian Armed Forces.


© All Rights Reserved: Duplication of Any Portion of This Chronicle Is Forbidden Without Prior Authorization By The Author.