During the early years of the war, the British and their Allies were making plans to build as many aircraft as possible. If some of this manufacturing could be done out of the range of Nazi bombers the process became simpler and more reliable. The United States was not involved in the war and so Britain turned to Canada which in a surprisingly short time was rolling out thousands of various smaller aircraft both for operational use and as trainers.

Initially the contract was to go to the National Steel & Car Corporation of Malton, Ontario who were already building Lysander aircraft and were also involved as a subcontractor in the manufacture of Hurricanes, Ansons and Hampdens. But questions as to the company's abililty to manage the project led to the Government's expropriation of the plant in 1942 and the setting up of the Crown Corporation, Victory Aircraft Limited on November 4th specifically to produce Lancasters. A Lancaster from England (R-5727) was flown across the Atlantic in August 1942 to act as a pattern.

Initially all components were built at Malton except for the bomb doors, flaps, ailerons, and elevators which were built by Ottawa Car & Aircraft Ltd. Later more of the parts were subcontracted out. Canadian General Electric Co. Ltd. of Toronto constructed the fuel tanks, tailplane, fins, and rudders. The outer wings were subcontracted to the Fleet Aircraft Limited plant in Fort Erie, Ontario.

From the first blueprint to the first test flight took only sixteen months, an impressive accomplishment. The work force escalated from 3,300 in 1942 to 9,521 in 1944, most of them initially unskilled and about a quarter of them women.

The Canadian prototype, with serial number KB-700, rolled off the Victory Aircraft assembly line on August 1, 1943, almost exactly a year after the "pattern" aircraft was flown to Canada. Named the "Ruhr Express," much publicity was made of its christening, first flight, and its departure to England. Indeed it was an occasion for which the country could be proud.

The feedback to Victory Aircraft in Malton from Manchester, where the British prototype Lancaster had made its inaugural flight at Ringway in January 1941, was that the Ruhr Express was the best equipped of any aircraft received from North America. "That's how an airplane should be built," said the chief inspector at A.V. Roe.

Eventually, production at Victory Aircraft Ltd. reached the level of one aircraft per day. A total of 430 Lancaster Mk. X's were built. As they were received in England, they were assigned to No. 6 Group, the RCAF component of Bomber Command, to complete this "All-Canadian" contribution to the war effort.

Technically, Malton produced 422 Lancaster BX aircraft as well as 8 Lancaster X XP aircraft. The latter were referred to at Malton as the "Mail Planes". Overall, 430 Lancaster airframes were built there, but there was a clear distinction between the above Marks. 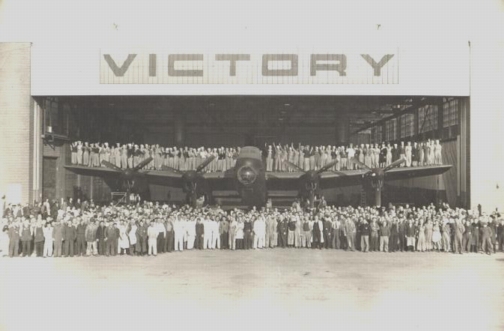 Workers at the Victory Aircraft Plant in Malton, Ontario
celebrating the roll out of KB999, the three hundredth Canadian-built Lancaster.


The Canadian built Lancs served well, some one hundred being lost in wartime service, approximately seventy missing in action and about thirty others crashing upon their return to England or in training. KB-732 flew the most operations of any Canadian built Lancaster, completing 83 during its tour of duty with 419 squadron.

On January 2, 1945 the first Canadian built Lancaster experienced hydraulic problems
while attempting to land following a raid to Nuremberg, its 49th operation.
The flaps would not deploy properly and, after overshooting the runway,
KB-700 ended up in a farmer's field where it collided with a trench digger.
Amid exploding ammunition the crew escaped but fire destroyed the aircraft.
The loss was particularly sad, especially when viewed fifty years later,
because the plans were to fly the Ruhr Express back to Canada following its fiftieth operation,
for a triumphant return and to become a memorial to the Canadians who built and flew Lancasters.
So ended the first plans for a Lancaster to be placed on display in a Canadian museum.


Following victory in Europe, three of the Canadian Squadrons had the pleasure of ferrying ex-Prisoners of War, many of whom were Canadian aircrew, back to England. But the war in the Pacific was still raging and the Canadian Lancasters were flown back to Nova Scotia to be prepared for service against the Japanese. This bomber group was to be known as "Tiger Force" but plans were cancelled after the dropping of the atomic bombs and the surrender of Japan in August, 1945.

In the fall of 1945, the roar of squadrons of Lancasters was heard for the one and only time over southern Alberta. Most of the British Commonwealth Air Training Plan bases had, by this time, been closed and several were to be used as storage sites for the returning bombers. The aircrew all knew the horror of war, but they had beaten the odds and survived; and were understandably elated. Before landing their aircraft for the last time and returning to civilian life they buzzed prairie towns and farms at extremely low level, frightening both residents and livestock. The Lancasters were then parked in long rows, the government of the day unsure of what to do with them.

Many of the Lancasters were "disposed of" by selling them to farmers. A Lanc could be purchased for a few hundred dollars and its parts put to many uses on the farm. To begin with there was lots of engine and hydraulic oil, wires, and hydraulic jacks which could be adapted to use around the farm. The aircraft also provided a seemingly endless supply of wire, metal tubes, and sheet aluminum. Some of the more novel ideas were placing Lancaster tail wheels on threshing machines, bomb-bay doors as borders of flower gardens, propeller spinners uses as plant pots, and escape hatches (with windows) serving to brighten the interiors of outhouses.

Beginning in 1946, many of the "low-time" Lancaster Mk X's were modified for service in Canada with the RCAF. There were a total of nine different versions some of which involved dozens of aircraft and some of which only involved a single plane. Fourteen were modified for aerial and photo reconnaissance work. These aircraft did much of the mapping of northern Canada and some continued to serve until 1962.

Eight of the Lancasters built in Canada by Victory Aircraft Limited were not completed as bombers, but rather as long distance transport aircraft. These included the third and fourth off the line, KB-702 and KB-703, as well as KB-729 and KB-730, and FM-184, FM-185, FM-186, and FM-187. The first Lancaster-based long distance transport aircraft was R-5727. This was the British-built Lancaster that had been flown across the Atlantic in April, 1942 to become the "pattern" aircraft to be utilized by Victory Aircraft as they prepared to manufacture Lancasters in Canada. When it had served its purpose, R-5727 was converted for transport duties and registered as CF-CMS. On July 22, 1943, it completed the first flight from Dorval (Montreal) to Prestwick, Scotland non-stop in a record-breaking 12:26 hours. The modified aircraft from KB-729 on were specifically delivered with rudimentary passenger facilities and were referred to as Lancaster XPP's (for Lancaster Mk.X Passenger Planes).

These aircraft operated under the "Canadian Government Trans-Atlantic Air Service (CGTAS)" from 1943 until 1947. Average crossing time was about 13 hours and 25 minutes but under favourable conditions, faster flights were frequently completed. CGTAS ushered in the era of commercial air travel across the North Atlantic and eventually became part of Trans Canada Air Lines. Initially the priority was to provide regular mail service to Canadian forces overseas and to transport key personnel on wartime assignments. By the end of the war, these modified Lancasters had completed hundreds of trips across the Atlantic. One Lancaster XPP, CF-CMU, was lost at sea. On 1 June, 1945, CF-CMS, which was the British-built R-5727, crashed landed and burned while on a training flight near Dorval. There were no injuries.

Following the war, TCA was permitted to carry paying passengers over the Atlantic and the Lancaster XPP's continued in service until replaced by Douglas DC-4's in April 1947. On May 1, 1947, the CGTAS began operating as Trans Canada Air Lines (Atlantic) Limited.


Two Lancaster derivatives were built by Victory Aircraft Limited during the war.

One was FM-300 which was completed as a Lancaster Mk. XV or "Lincoln." It first flew on October 25, 1945 and was the only one completed by Victory Aircraft although there were plans to build 200 had the war in the Pacific not ended as quickly as it did. The Lincoln was a somewhat enlarged version of the Lancaster Mk. X. It featured a modified nose section, a stretched rear centre section, slightly enlarged rudders, a larger outer wing section, and more powerful Merlin 68 engines housed within cylindrical nacelles. All gun turrets were capable of handling .50 calibre guns. 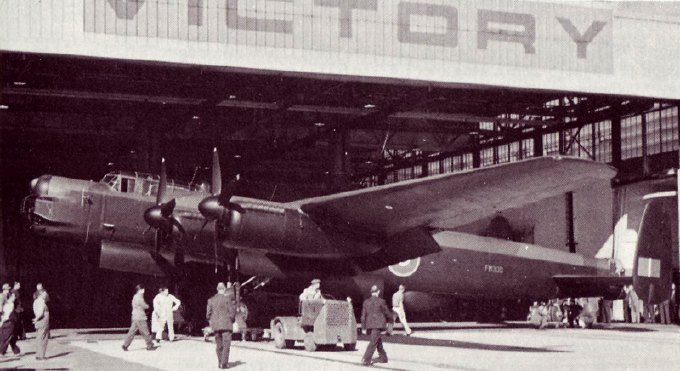 The other Lancaster derivative built in Canada was FM-400 which was completed as an Avro York. In early 1943, Victory Aircraft was given an order to build fifty of these aircraft to be used for Trans-Atlantic service. The York modification was significant in that the fuselage was square-shaped in cross-section in order to make the aircraft more suitable to carry passengers or freight. By the summer of 1943 it was determined that the York's large rectangular fuselage would introduce an unacceptable icing hazard on the North Atlantic route and would also be unsuited for pressurization if it was determined that this was necessary. Modified Lancasters were then chosen for the Trans-Atlantic role. FM-400 first flew on November 14, 1944 and was delivered to Britain shortly after.

It was registered in Britain as G-ALBX and was lost during the Berlin Airlift in June 1949. It had served well though, completing an astonishing 467 trips into the city as a tanker.

A number of British-built Avro Yorks flew in Canada as privately owned transports during the 1950's.

Another Lancaster that acquired some Canadian history was TW-870. This was a British-built Lanc that had come to Canada in 1946 with No. 35 Squadron of the Royal Air Force on a post war "good will" visit to North America. One of twelve on the trip, TW-870 was severely damaged during a landing at Gander, Newfoundland prior to returning to Britain. Abandoned by the RAF, it was sold as scrap in October 1950. However the entrepreneurs who purchase it then flew the aircraft to Dorval where it was converted for service as a tanker and registered as CF-GBA. On 28 July, 1953, it crashed and burned at Menihek.

A number of Canadian-built Lancasters have been preserved in Canada and other countries
and placed on display as memorials and in some cases in museums.