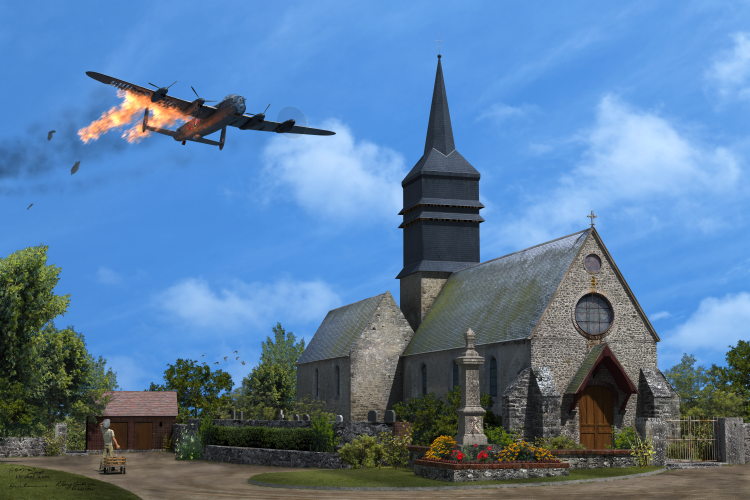 Baz must have known that the odds of him being able to crash-land the flaming Lancaster on one engine without sustaining serious injury or having the aircraft explode were very low. Even if this first step was successful, his chances of being able to drag his two wounded crewmembers from the burning wreckage to safety were probably even less. Baz's decision not to escape the burning aircraft with the others was probably instinctive. He could not leave his injured crewmembers.

Chuck Godfrey, the wireless operator, watched as the blazing bomber banked to port as it lost altitude and Baz prepared to land in a field just north of Senantes. "I could see it all," said Godfrey. "He did get it down in a field... but it was well ablaze and with all the petrol on board it just exploded." The huge fireball killed the three on board instantly.

Ian Bazalgette was born in Calgary, Alberta. Educated in Ontario and England, he joined the Royal Air Force in 1941. By mid-1943 he had completed a tour of thirty operations with No. 115 Squadron and been awarded the Distinguished Flying Cross. Following a posting to an O.T.U. as an instructor, he arranged with Group Captain Hamish Mahaddie to be posted to the elite Pathfinder Group which marked targets for the main bomber force. Following his Pathfinder training his crew was posted to No. 635 Squadron stationed at Downham Market.

By the summer of 1944 Baz had almost completed his second tour and Nazi V-1 flying bombs were striking England. While visiting his parents' home near London during his last leave, Baz and his sister had huddled for hours under a metal table with a mattress on top of it as the V-1's came down around them.

Ironically the target on August 4th, 1944 was a V-1 Rocket storage site at Trossy St. Maximin, just north of Paris. The target had been bombed on the two previous days and as rear-gunner Douglas Cameron recalled, "A solid sea of flak filled the width of the bomb run," knocking out the Master and Deputy Master Bombers and leaving Baz with the responsibility of placing the first target markers. Flak struck the starboard wing setting it on fire and knocking out both engines. Despite the damage and risk of explosion Bazalgette stuck with his course and successfully marked the target before spinning. Regaining control, he turned west toward the allied lines until, twelve minutes later, the port-inner engine failed. According to Cameron, "The starboard wing was like a herringbone after all the flesh has been eaten off it. I could hardly believe we were still flying. I knew we were a doomed aircraft."


Flight/Seargant Larry Melling DFC joined No. 635 Squadron about a month after Ian. He clearly recalls being impressed by him on his first day at the squadron when he walked into the Flight Office, "He had a tremendous sparkle in his eye is the best way to describe it. He stood out amongst the people who were there. He was an inviting sort of a person, a person that you wouldn't hesitate to approach. He was always the first to volunteer for a job, no matter what sort of job it might be. Even though he was a Squadron Leader he wasn't above pushing a car to get it started or pumping up someone's bicycle tire."

Douglas Cameron remembers Ian Bazalgette as "an officer who was equally at home with his peers and other ranks; who earned the respect of all by his pursuance of carrying the offensive to the enemy; who won the affection and gratitude of his subordinates for his care and promotion of their welfare, not less that the approval of his fellow and senior officers."

Ian had a bible by his bed at all times during his days in the Royal Air Force and had other interests which were generally not shared by his contemporaries on the squadron. One of these was collecting classical music, upon which he had written essays while at school prior to the war. He was a connoisseur, comparing different orchestras and conductors before choosing a recording. He wanted each work in his collection to be performed by the musicians he felt were most suited to the particular piece of music and to the composer.


More information on Ian Bazalgette can be obtained in the publication..