The Harvard was an American design, known in that country as the AT-6 Texan. A total of 3350 were produced in Canada, more than any other type. Beginning in 1940, 2800 were built by Noorduyn in Montreal and during the 1950's another 550 were constructed by Canadian Car and Foundry.

Well suited to its training role, the Harvard was a high performance aircraft which had enough bad habits to teach inexperienced pilots to respect the even more powerful fighters they would soon be flying. Strong, but unforgiving, it required a delicate touch to maintain the proper attitude upon take off and landing. Following the war the Royal Canadian Air Force kept the Harvard on strength until 1966, training pilots for their duties with NATO. A training base in Claresholm, just south of Nanton, utilized the aircraft for this purpose during the 1950's.

The distinctive snarl of the Harvard is produce by its 600 horsepower Pratt & Whitney engine together with its nine foot propeller which, when in fine pitch at high rpm, approaches sonic speeds. 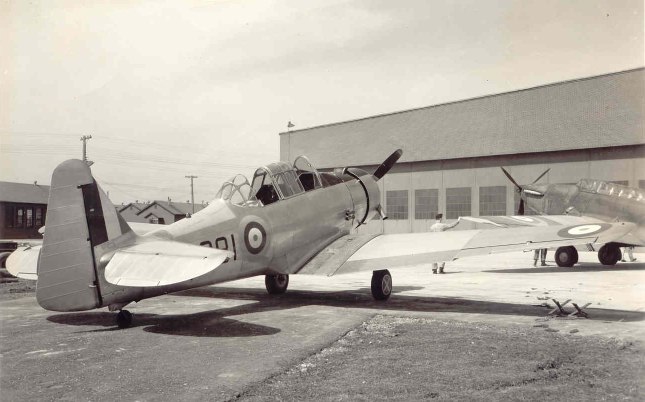