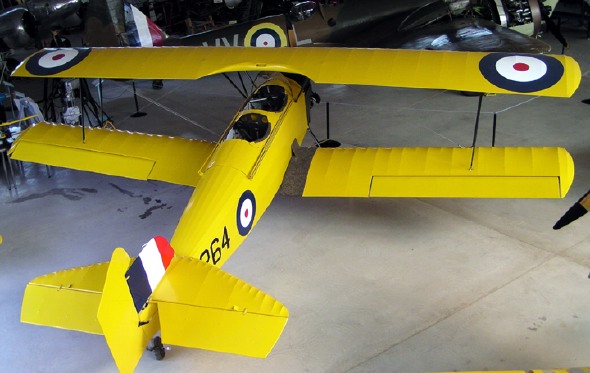 The Fleet Fawn first saw service with the Royal Canadian Air Force in 1931 when twenty Mk I's were delivered. Several versions of the "Fawn" design were manufactured during the 1930's, with the first Mk II (7c)'s being delivered to the RCAF in 1936. This version featured a 140 hp Armstrong Siddeley Civet seven cylinder radial engine and was soon found to be the best of the Mk II's.

A total of 71 Fawn Mk II's were built between 1931 and 1938 at the Fleet Aircraft of Canada's plant at Fort Erie, Ontario. As a two-seater primary trainer they were felt to have excellent flying characteristics together with a rugged strength which inspired confidence. The RCAF was very impressed with the Fleet Fawn and claimed that the aircraft was one of the factors which improved its flying standards during the 1930's.

The aircraft consists of a fabric-covered welded-steel fuselage with metal panels forward of the wooden cockpits. It has steel-tube faring formers and wooden stringers. The wings are of equal spans, single bay, and wire braced. The upper wing was made in one piece and constructed with two solid spruce spars. Ailerons are found only on the bottom wings. Stamped aluminium alloy ribs were used to construct the wings and steel-tube compression struts are at the interplane and centre section of the wings. Interlaced between the wings are streamlined landing and flying wires. During the late 1930's a sliding cockpit enclosure became standard equipment of all RCAF Fawns.

Forty three Fleet Fawn trainers were operational with the Royal Canadian Air Force when war was declared in 1939. They were used primarily to train hundreds of flight instructors under the British Commonwealth Air Training Plan during the war. The Fawn remained in service with the RCAF until 1947.

The museum's aircraft is Fleet Fawn Mk II (Serial #123). It was delivered to the Royal Canadian Air Force on July 7th, 1938. Designated as #264, it served extensively at the Flight Instructor Schools at Camp Borden and Trenton before being struck-off-strength on December 3rd, 1945.

Ernie Oakman of Stewart Valley, Saskatchewan purchased the aircraft together with Fawn #220 putting one in the loft of his barn for safekeeping and the other in his yard for his children to play in. Eventually both aircraft became the property of Harry Whereatt of Assiniboia, Saskatchewan. #264 was returned to Ernie in trade for the remains of a Hawker Hurricane; #220 was restored to flying condition by Mr. Whereatt and is now the property of the Reynolds Air Museum in Wetaskawin.

Fleet Fawn #264 was donated to the Nanton Lancaster Society by Mr. Oakman in 1990.

Extensive restoration of the aircraft was required, including the complete re-building of the wings and the fabric covering of the entire aircraft. It currently operates with a Kinner B-5 engine.

The Lethbridge Foundation supported the restoration in memory of Stubb Ross, a highly respected resident of Lethbridge who played a prominent role in the aviation business. The aircraft was officially put on display in 1997 with representatives of the Oakman family in attendance. 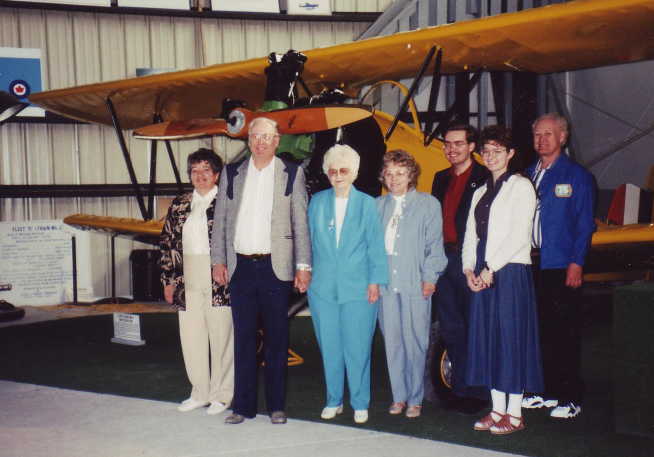 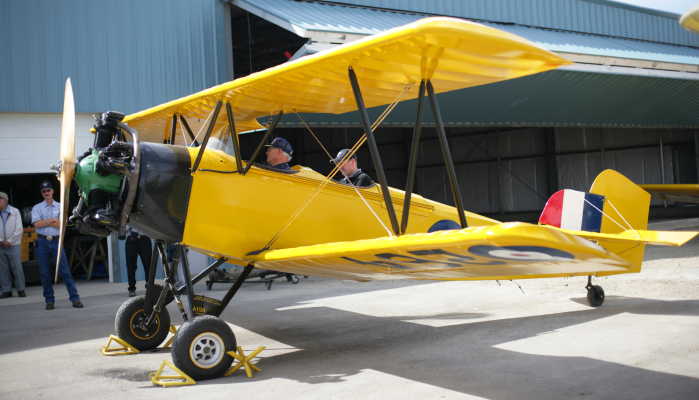 Fleet Fawn with Larry Oakman in front and Greg Morrison behind.