By the end of the day four of the five aircraft which set out from RAF Wattisham on the squadron's first operation of the war had been destroyed and one of the pilots had become the first of about 10,300 Canadians to be killed while serving with Bomber Command during the Second World War.

Known as "Nab" to the family, Albert attended Caldey Grange Grammar School. A tall, athletic looking young man, he played tennis and captained the Nestor Nomads football team. After completing his schooling, he spent seven years working for the Neston Council, performing various clerical duties. Highly thought of by his employers, he was presented with an engraved gold watch and cufflinks upon his resignation in 1935 following his decision to join the Royal Air Force.

After initial training at Bristol, he attended the Martin School of Navigation at Shoreham by Sea where he trained on the twin-engined De Havilland Dragon Rapide aircraft. He married Winifred Mary on November 21, 1936 and the couple had one son, William. 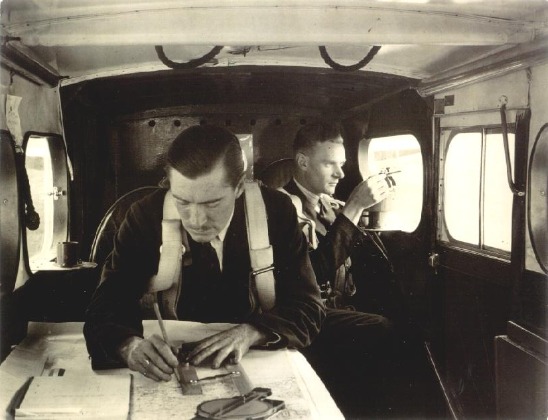 As a pilot with "B" Flight, 107 Squadron, Royal Air Force, Sgt. Prince was based at Wattisham, Suffolk. Granted leave on August 15, 1939, he returned to base on September 2nd, listened to news of war being declared on the 3rd, and was ordered to fly on the first bombing operation of the war on the 4th. The squadron operated Bristol Blenheim IV aircraft which, with its distinctive scalloped nose, was one of four twin-engined bombers which were ready for action at the beginning of the war. Together with the Wellington, Hampden, and Whitley, they would carry the load for Bomber Command until the four-engined Stirlings, Halifaxes, and Lancasters took over.

Weather conditions were unchanged over the English Channel as the fifteen aircraft of Bomber Command flew just above the wave-tops through mist and cloud, struggling to see during periods of heavy, continuous rain. The five aircraft from No. 139 Squadron jettisoned their bombs and turned back after failing to locate the warships.

However the No. 110 squadron aircraft found the targets. P/O Selby R. Henderson from Winnipeg, Manitoba was the navigator in the lead aircraft and, as he sat in the very nose of the aircraft, was the first member of Bomber Command into action during World War II. His pilot, Squadron Leader K.C. Doran, led the attack as the five Blenheims attacked the enemy warships at low level.

The German sailors likely mistook the attacking aircraft for Luftwaffe Ju-88's until the RAF markings became apparent. Clearly surprised, the ships' crews were later reported, "to have looked up as if watching an airshow." The Blenheims hit the Admiral Scheer with at least four bombs, none of which exploded probably because of the extremely low altitude of the attack and the battleship's thick armour plating. Later, S/L Doran gave an interview in which he described the raid as follows: "We could see a German warship taking on stores from two tenders at her stern. We could even see some washing hanging on the line. Undaunted by the washing we proceeded to bomb the battleship. Flying at 100 feet above mast height all three aircraft in the flight converged on her. I flew straight ahead. The pilot of the second aircraft came across from one side, and the third crossed from the other side. When we flew on the top of the battleship we could see the crews running fast to their stations. We dropped our bombs. The second pilot, flying behind, saw two hit. We came round, and the ship's pom-poms began to fire as we headed for home. My navigator saw shells bursting almost on the tail of the aircraft." 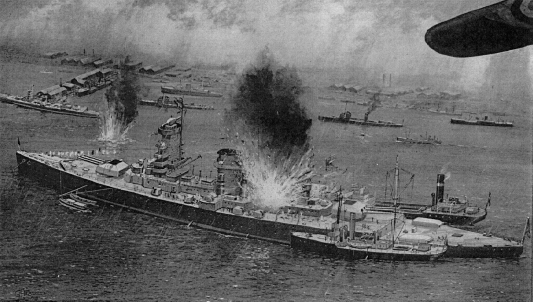 S/L Doran had bombed accurately, two of his bombs hitting the battleship. The first became imbedded in the armour-plated deck and the second bounced off, neither exploding. A second aircraft scored a direct hit as well only to see its bomb bounce harmlessly off the ship's thick armour. The enemy reacted quickly and the remaining aircraft of No. 110 Squadron came under fire. Blenheim N6199 was struck by flak and crashed directly into the bow of the cruiser Emden killing all four aboard the aircraft. The pilot, by way of a remarkable coincidence, was F/O H.L. Emden. The impact resulted in the German Navy's first casualties of the war as nine sailors aboard the warship were killed as well. As the four surviving No. 110 Squadron Blenheims headed for their base Sgt. Prince and the No. 107 Squadron aircraft prepared to attack.

There was no element of surprise when Sgt. Prince arrived over the target. The German flak was heavy and well directed. Three of the four bombers which attacked were shot down during their low level bombing runs. A German witness reported the fate of a fourth: "The crew of one Blenheim attacked at such a low level that the blast of their own bomb on the warship destroyed the RAF aircraft." Apparently the delay fuse must have malfunctioned.

With its bombs still on board, a single 107 Squadron aircraft returned to base after being unable to find the target, landing safely at Wattisham. A Blenheim wireless operator/air gunner later recalled, "There was tremendous excitement when "A" Flight (No. 110 Squadron) returned and consternation when the lone Blenheim of 107 landed. It occurred to us aircrew that if this was to be the pattern of future operations we were in for a very short career."

The aircraft flown by Sgt. Prince was one of the three which appear to have been shot down by flak. In an interview with a German journalist, Sgt. G.F. Booth, the observer (navigator) whose position was in the nose of the Blenheim, was asked, "if he noticed how the aircraft was brought down." He answered, "We hit something... I was looking forward. I just saw the water and heard the crash." 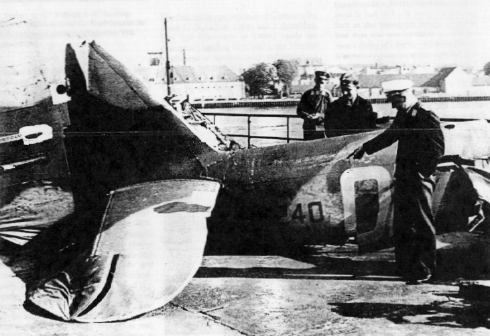 It appears that the aircraft went down quickly but Sgt. Prince must have had some control as the bomber was ditched in the harbour. All three crewmembers were successful in getting out of the aircraft and were picked up by a pilot boat. But Sgt. Prince had been mortally injured and died later in hospital. Sgt. Booth suffered a broken foot and the wireless op./air gunner, AC1 L.G. Slattery, had his jaw dislocated when his face was dashed against the machine gun in his turret. Sgt. Booth and AC1 Slattery become the first allied prisoners of war and remained in confinement until liberated from Stalag 357 by Allied forces.

The enemy honoured Sgt. Prince and the fifteen other RAF aircrew who died during the raid with full military funerals. Their coffins were draped with the Union Jack and taken by hearse to the grave site in Geestemunde Cemetery. A naval honour guard stood at attention as they were interred. Later, their remains were transferred to Becklingen War Cemetery at Soltau, Germany.

Initial reports stated that the raid was somewhat successful in that the Emden was put out of action for two or three months although the Admiral Scheer appears to have escaped unscathed.

However the raid had provided the British public with the first heroes of the war. The Ministry of Information reported that the Blenheim pilots and crews were, "proud to have been chosen to strike the first blow at the German war machine." F/O McPherson, the Blenheim reconnaissance pilot, and S/L Doran were awarded the war's first DFC's.

The first Canadian serving with Bomber Command to be killed during World War II, Sgt. Prince was also the first Canadian to die in combat in any of the services. Before the war in Europe ended over five and one half years later, some ten thousand young Canadian aircrew had been killed serving with Bomber Command in what has been described as the most continuous and gruelling operation of war ever carried out.


To commemorate the Sixtieth Anniversary of the death of Sgt. Prince, "The First of the Ten Thousand", the Nanton Lancaster Society Air Museum unveiled a display in his honour on September 4, 1999. Over the year prior to this unveiling the Society had been conducting research into the events surrounding his death and located members of Sgt. Prince's family including his son William.