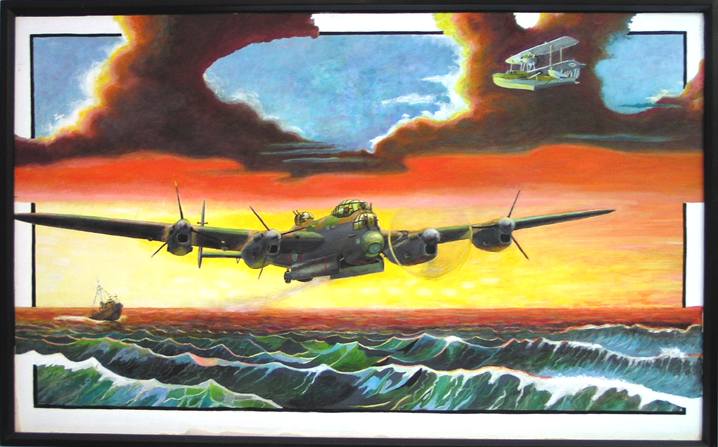 Following his retirement, David pursued his passion for painting -much of his work inspired by his memories of action with Bomber Command as a Lancaster rear gunner. His passion for art and the completion of his series of wartime paintings was sadly cut short when his arms became immobile due to illness. Some remain unfinished and others that were being planned appear to have never been started. David was a long-time supporter of our museum. At his request these unique, spectacular paintings were donated to the museum following his death in 2006.

One of the pages in David's sketchbook shows six airmen and lists their names. These men must have been David's crewmembers and they are recognizable in many of the other sketches. The names are: Art Squibb (pilot), Ken Campbell (bomb aimer), Tug Wilson (flight engineer), Martin Collins (mid-upper gunner), Herk Ely (navigator), George(?) Evan (wireless operator) and Dave Mould (rear gunner). The name "Hawkins" is on the list as well and it appears that he replaced Herk Ely as navigator at some point.