After spending two long, frustrating years fulfilling assignments such as waiting on officers' tables as a "batman" and assisting armourers, Engbrecht re-mustered as an air gunner in 1943. He was said to have been ecstatic to be training as aircrew but found the pace devastatingly slow. One day he grew frustrated with what he referred to as, "the stupid target," and decided to hit the buckle immediately behind the aircraft to which the tow cable was attached. The whole contraption fell into the North Sea, the pilot was scared to death, and Engbrecht was almost court-martialed.

Gordon Gillanders was born in Vancouver in 1924, enlisting in that city in 1942. He trained at No.3 Bombing and Gunnery School at MacDonald, Manitoba, graduating in September 1943.

In May, 1944, Engrecht and Gillander's crew was posted to No. 424 Squadron flying Halifax bombers. During the night of May 27 /28 they attacked Bourg-Leopold, Belgium on their second operation. Their aircraft ("Dipsy Doodle") was attacked fourteen times by German night-fighters in a running battle from the target back to the English coast." Just after we left the target area," Engbrecht recalled, "Bullets began to whistle over our aircraft and I opened fire in the direction the tracers came from."

The combat reports for the operation are as follows: "The enemy fighter made a bow attack and the first warning received was his trace, the pilot immediately going into a corkscrew and the mid-upper firing at the trace. The aircraft itself was not sighted, consequently no ranges could be given but the bomb-aimer had a glimpse of the fuselage as it went down and is of the opinion that it was an Me110. The fighter appeared to drop off on one wing and went on down in flames, a petrol tank exploding on the way down and another heavy explosion upon impact with the ground which was witnessed by the pilot, engineer, and bomb aimer.

"Continuous attacks followed, mainly by three aircraft operating together, a Ju88 with two Me109's on either quarter. On this first attack three guns of the mid-upper turret packed up and all guns in the rear turret. The one gun from the mid-upper turret was the only one serviceable for the rest of the sortie with the exception of one gun working from the rear turret towards the end of the trip and very few rounds were fired from this gun. The attack given on this pro-forma came after several sightings and through the corkscrewing, the aircraft was below the height of the main stream.

"After further attacks after the above first mentioned attack, an FW190 attacked from the port quarter up and started to break away on the port beam, the mid-upper gunner firing almost continuously and observing the fighter to blow up in his sights, observed by the pilot, engineer and rear gunner. The attacks were kept until reaching the English coast. Types seen were Ju88, Me109, nearly all operating in threes. The mid-upper gunner had no time to clear his guns and used only the one to shoot the second machine down. Further hardship was caused by intercom failure from the turret, combat manoeuvres being passed on and given by the rear-gunner."

On June 10/11 1944, Sgt. Engbrecht shot down two more enemy night fighters during a raid on the rail facilities at Versailles-Matelots in France. The combat report for this action reads, "At the position given a fighter flare was seen to drop on the starboard beam, the enemy aircraft came from behind the flare and in doing so silhouetted himself against it. The Me110 opened fire at 400 yards, almost immediately on sighting. The mid-upper gunner ordered combat manoeuvre and opened fire right after, keeping up his fire until the engagement was broken off, the rear gunner getting in a short burst at 250 yards. The fighter seemed to lose control at 200 yards range, diving straight down and an explosion was seen on the ground a few seconds later.

Immediately afterwards an Me109 attacked. "In this combat, conditions were the same as in the previous one, identical ranges etc., except that the fighter was seen to go on fire, flame coming from the engine so far as can be ascertained, and then went down into scattered cloud below, the whole cloud lighting up a few seconds later. The fire did not start until the breakaway, starting with a small glow and growing rapidly. Due to being in a corkscrew the illumination in the cloud was seen by all members of crew except the wireless operator and navigator."

For these actions, Sgt. Engbrecht was awarded the Conspicuous Gallantry Medal, one of only eight presented to Canadians during the war. The medal was presented by the King at Leeming on August 11 and the citation read, in part, "His exceptional coolness and confidence under fire was a source of inspiration to other crew members. . . His feats have been worthy of great praise."

On August 7, 1944 while flying another Halifax, "Galloping Gerty", Sgt. Engbrecht shot down an Me-410 and, together with Gillanders, a JU-88. To become an "Ace," an airman had to destroy five enemy aircraft. With 5 1/2 shot down, F/Sgt. Peter Engbrecht now held the distinction of being the only RCAF ace who wasn't a fighter pilot.

During a raid on Brunswick six days later on August 12/13, Sgt. Engbrecht claimed an Me210 and a "probable" JU-88. The combat reports read as follows: "Enemy aircraft was first seen by mid-upper gunner and rear gunner as it attacked and shot down another Halifax on their port quarter down. The fighter then turned and attacked from the port quarter level at 450 yards. Corkscrew port was given by mid-upper gunner. Fighter opened fire at 400 yards and both gunners immediately returned fire. Traces from both turrets converged on the enemy aircraft which burst into flames and was seen to explode by both gunners and engineer. The aircraft was identified at an Me210." Rear-gunner sighted enemy aircraft at 400 yards port quarter down. He and fighter opened fire at the same time. Trace was seen striking the enemy aircraft which burst into flame and shortly afterwards exploded. The aircraft was identified as an Me109 when it burst into flames and was seen to explode by the engineer and both gunners. The pilot also saw the flash and burning parts going down. Following this raid F/Sgt Gillanders was recommended for the Distinguished Flying Medal. The accompanying citation stated, "Flight Sergeant Gillanders has always shown courage, coolness and determination to fulfil his duty."

Four days later on August 16/17, Gillanders was credited with an Me110, the combat report reading, "An unidentified aircraft was first sighted at 550 yards starboard quarter down, showing a yellow light in the nose. The fighter immediately opened fire and rear-gunner gave the evasive action corkscrew starboard. The gunner opened fire at 500 yards and continued firing until fighter closed to 400 yards, at which time the fighter caught fire and broke off on the starboard quarter down. The gunners lost sight of the fire, but about two minutes later an aircraft was seen to explode on the water. The mid-upper gunner saw it burn for a short time and disappear. Rear gunner claims fighter as probably destroyed." Engbrecht claimed a "probable" Me-262, one of the Nazi's new twin-engine jet fighters, during that night as well.

Most of their operations were flown in Halifax HX316 that featured the nose art, "Dipsy-Doodle" and Halifax MZ802, that carried the nose art "Gallopin-Gerty." Both of these were painted by Matthew Ferguson of Calgary, Alberta.

The media of the day made much of Peter Engbrecht and his successes. The Toronto Star wrote, "The paradoxical Peter Engbrecht is, all at once, a member of a religious sect which forbids participation in wars, of pure Germanic descent, and a member of the RCAF. The 21 year old gunner can claim an unparalleled record in the air force."

Peter Engbrecht left the RCAF in June, 1945 with the rank of Pilot Officer. He then farmed for three years in the Turtle Mountain area south of Lake Whitewater, Manitoba. Like many other Mennonites who served, he was not ready for the hostility he encountered from his own people so in 1948 he re-enlisted in the RCAF as a radar technician.

He served a total of 28.5 years with the RCAF, mostly with Air Defence Command and NORAD. As a Master Corporal, he was honoured by the RCAF Association with a Fly-Past Salute on Parliament Hill on September 28, 1972. He was the first person of his rank to ever take the salute. The following evening at the banquet in his honour, the dignitaries included Governor General Roland Michener who at one point stood to attention and said, "Master Corporal Engbrecht, the Royal Canadian Air Force Association saluted you yesterday on Parliament Hill. Your Governor General salutes you now." A "roar of spontaneous applause" was said to have filled the room.

Peter Engbrecht reached the rank of Flight Lieutenant and retired in 1973. At the time of his retirement he was the longest serving NORAD serviceman. He retired to Beausejour, Manitoba where he worked with the Beausejour Beaver newspaper. Following the death of his first wife, he married Ramona Sarkozi in 1978 and two years later moved to Altona, Manitoba. He passed away in April, 1991. His obituary stated that, "Peter had a warm extroverted personality coupled with a friendly smile and a good witty sense of humour. His character and charm did much to maintain the morale and spirits of the crews he served with. He was known as a competent and skillful teacher capable of imparting his knowledge and wisdom."


Clarence 'Larry' Sutherland DFC and BAR was another of the most successful RCAF Air Gunners, shooting down a total of seven enemy fighters including three in one night. His story is told as an 'Aircrew Chronicle' and in a video interview available within these archives. 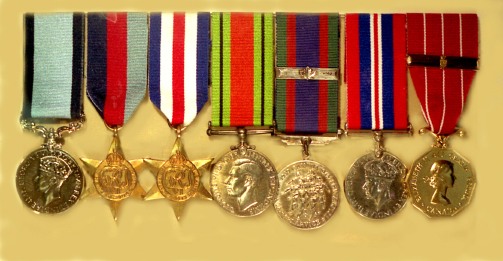 
[ Thanks to Clarence Simonsen and Richard Koval for their assistance ]