F/Sgt. Winston Parker was an air-gunner aboard 419 Squadron Wellington X3467 (VR-N) when it was shot down on a raid to Hamburg during the night of 8/9 April 1942. His pilot was F/O A.B. Crighton and all six members of the crew were Canadians.

The aircraft was abandoned after fires broke out in both of the aircraft's engines. Five of the crew parachuted successfully and became Prisoners of War but P/O E.R. Howard was killed.

Winston became a prisoner in Stalag VIIIB where he stayed until he was forced to participate in 'The Long March' that began in January 1945.

Stalag VIII-B Lamsdorf was a German Army prisoner of war camp, later renumbered Stalag-344, located near the small town of Lamsdorf (now called Łambinowice) in Silesia. The camp initially occupied barracks built to house British and French prisoners in World War I. At this same location there had been a prisoner camp during the Franco-Prussian War of 1870-71.

All but the final photo from Winston's album were taken with a secret camera by Wireless Operator/Air Gunner Bill Lawrence in Stalag VIIIB 'Flieger' Compound. Bill made the camera from a Red Cross biscuit tin with the aid of two lenses which were smuggled into the main camp from an outside working party. After each shot, he had to move the film frame manually under the blanket of his bed while an accomplice watched out for the guards. He had friends who had access to the camp hospital and they obtained film and x-ray chemicals for developing it. Bill turned his bed into a darkroom, developing film under the blanket.

Although Winston didn't smoke, he received lots of cigarettes in his Red Cross parcels. He often used these to bribe the enemy guards to gain access to items such as lenses and film and chemicals from the hospital.

For the shots outside, the camera was concealed in a Red Cross food parcel box. Bill carried the box under his arm and had a hole cut in one end which he covered with his hand. As well, the prisoners had a secret, hidden radio, with which they were able to pick up BBC News broadcasts. They then wrote out the news and distributed it to others in the camp.

Winston's photos provide a window into the lives of Bomber Command Prisoners of War. 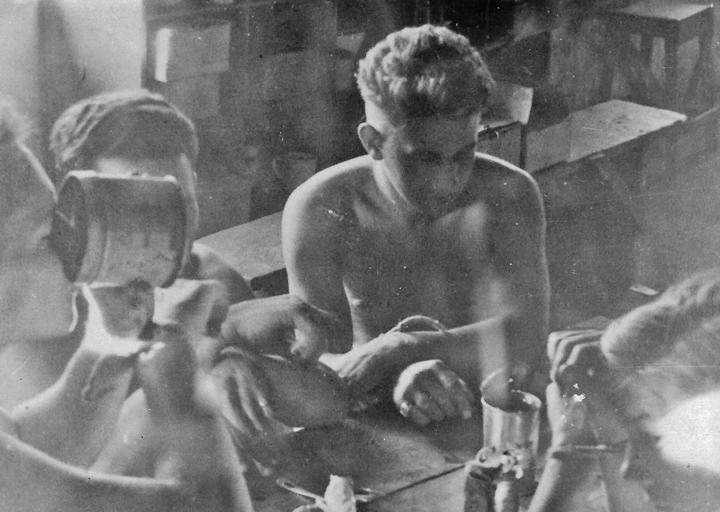 Group of prisoners with wrists tied during the 'typing up' period; Del Mooney facing camera. 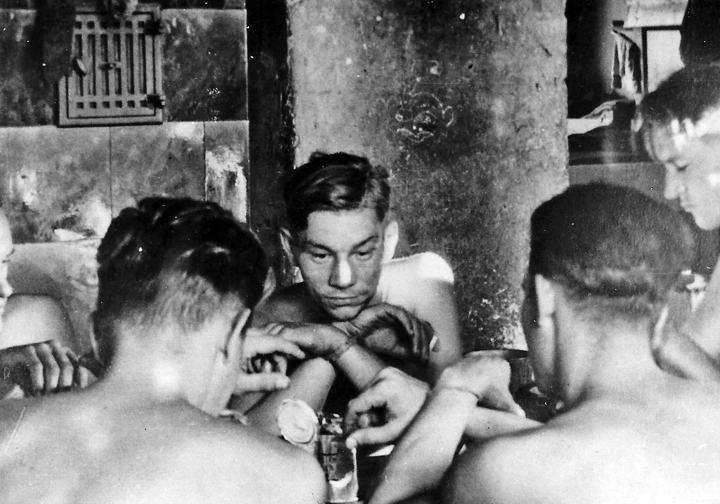 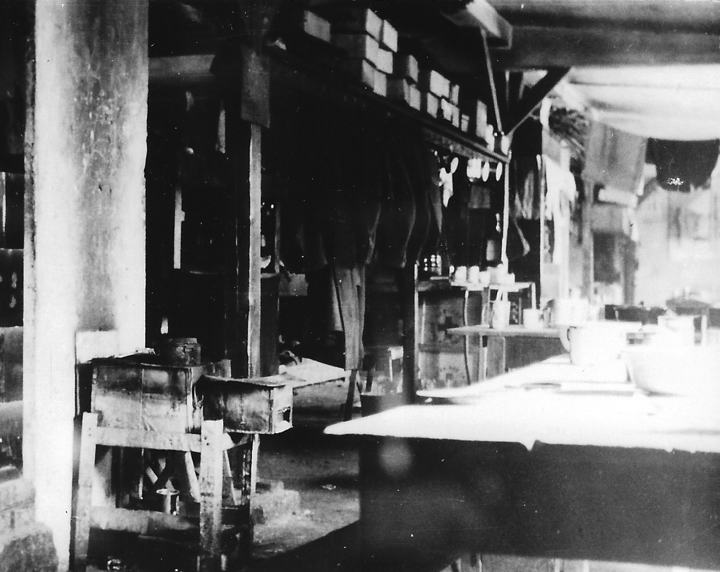 The interior of Hut 16B 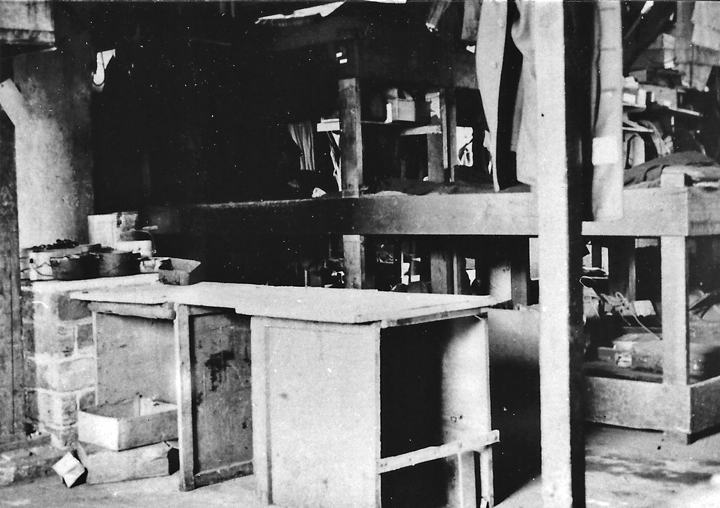 Packing case furniture in Hut 16B. 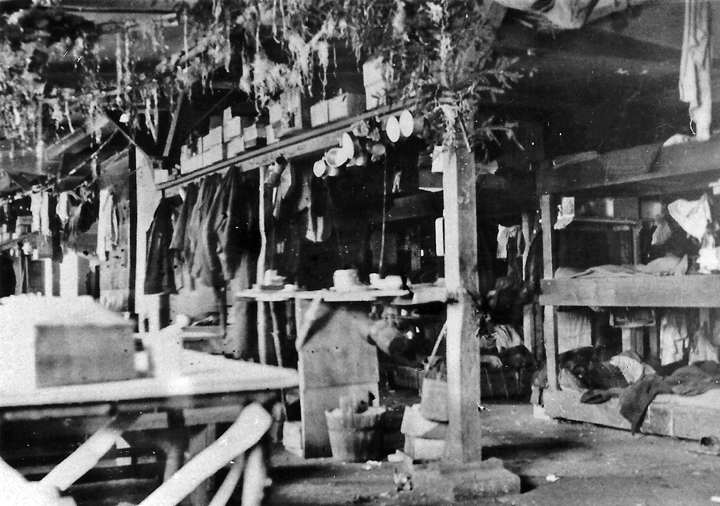 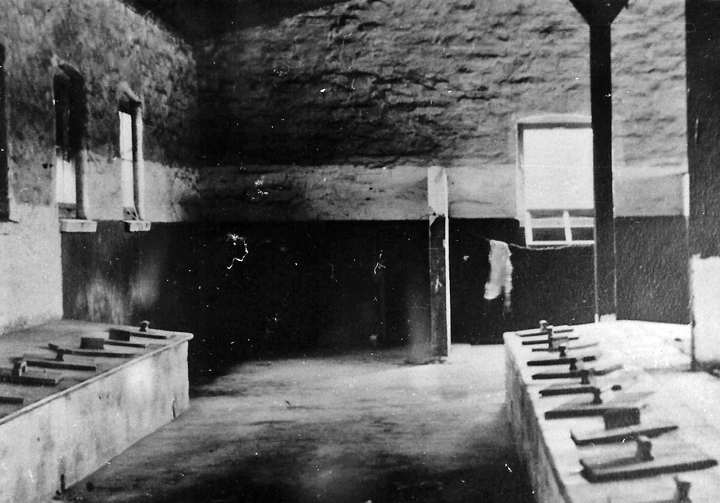 Left half of the 'Forty Holer'. 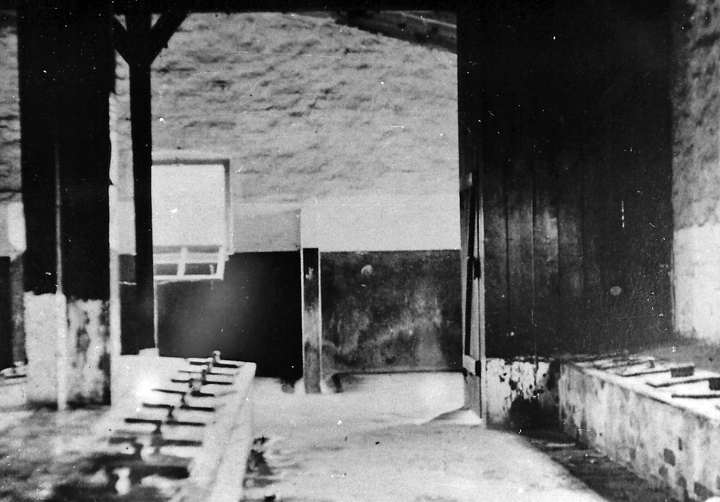 Right half of the 'Forty Holer'. 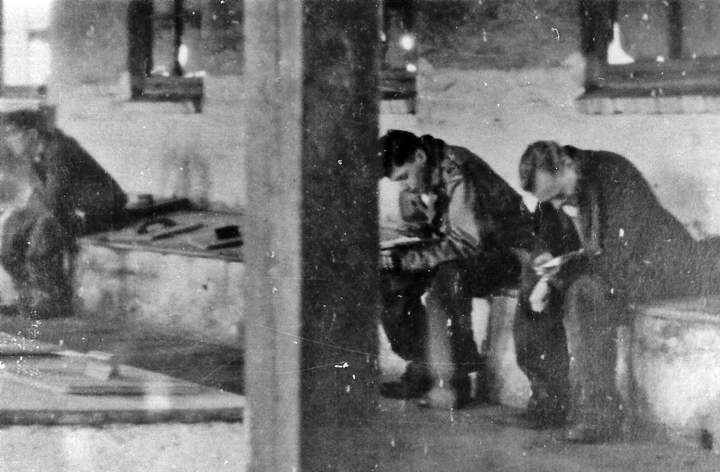 Three prisoners putting the 'Forty Holer' to good use. 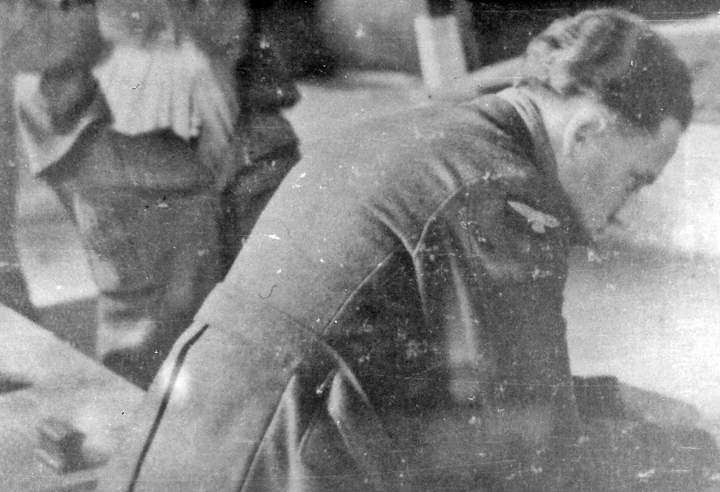 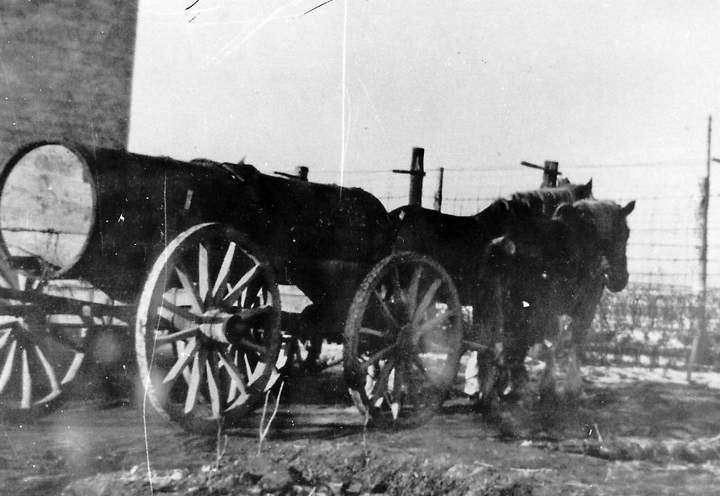 Horses and barrel cart used for removing effluent from the sump below the 'Forty Holer'. 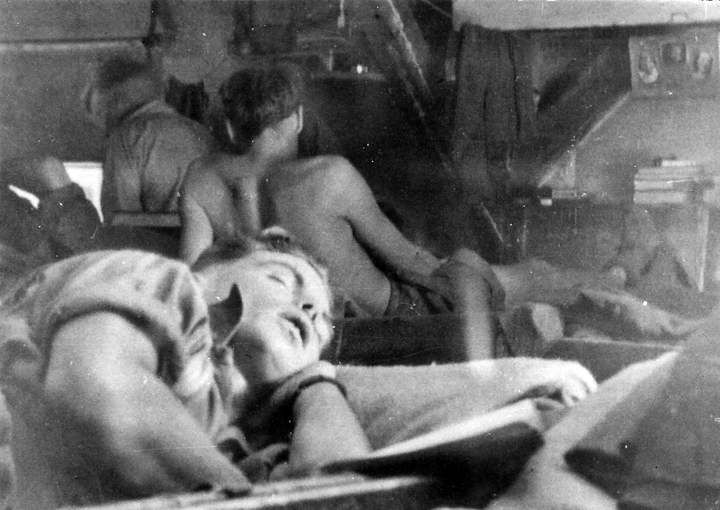 Interior of Hut 16B; Mickey Finn (front); Ron Esling (back to camera); Don Bruce (beyond). 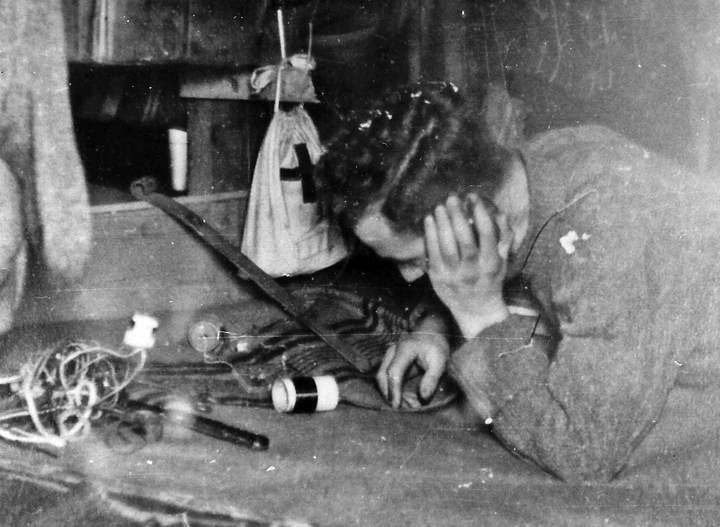 Illegal crystal radio set in use; Listening to broadcasts from the Polish Underground. 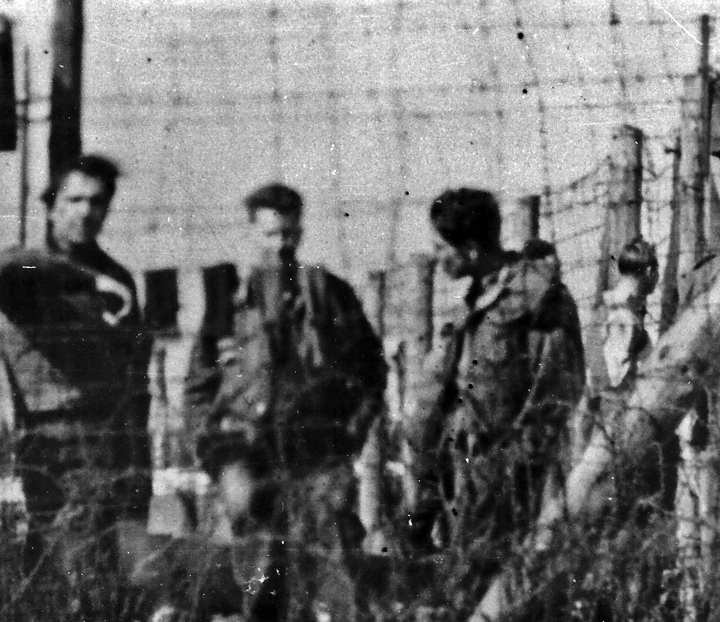 Les Keatley, Del Mooney, Unknown just prior to setting off on 'The Long March'. 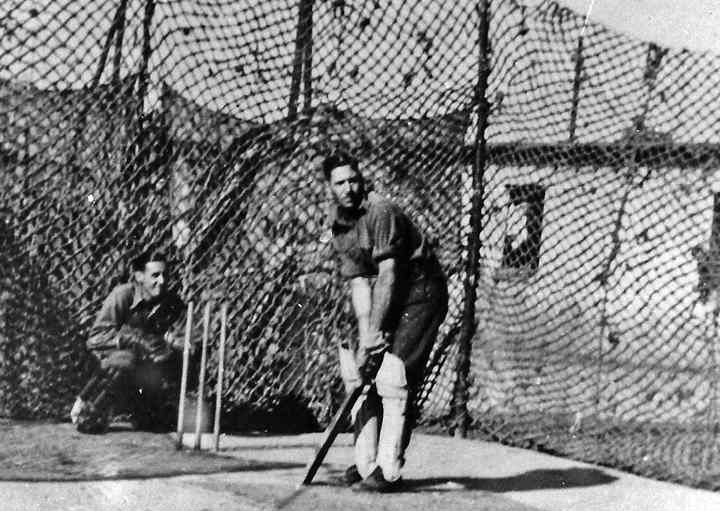 David Radke RAAF in the nets; nets made from Red Cross parcel string. 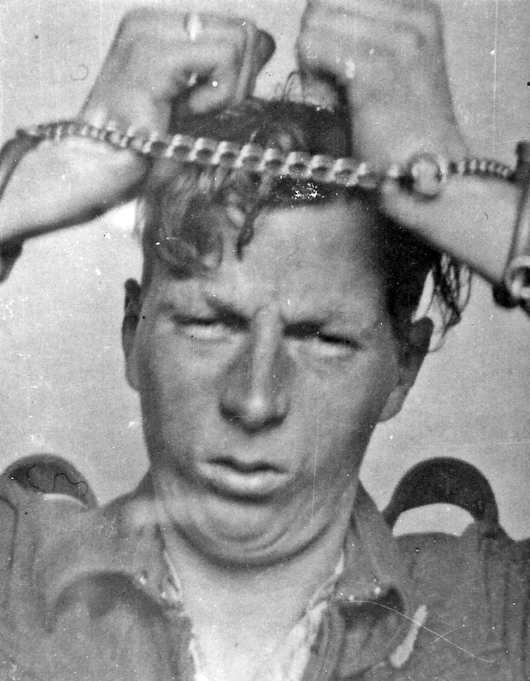 Jack Diamond, guitarist, wearing handcuffs during the 'chaining up' period. 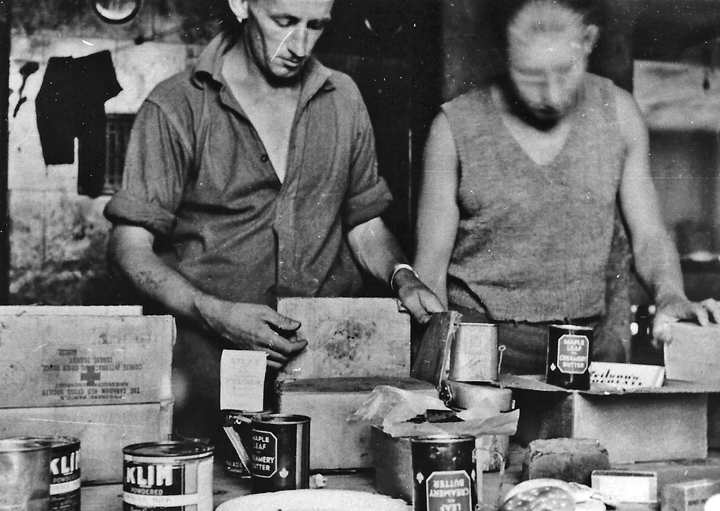 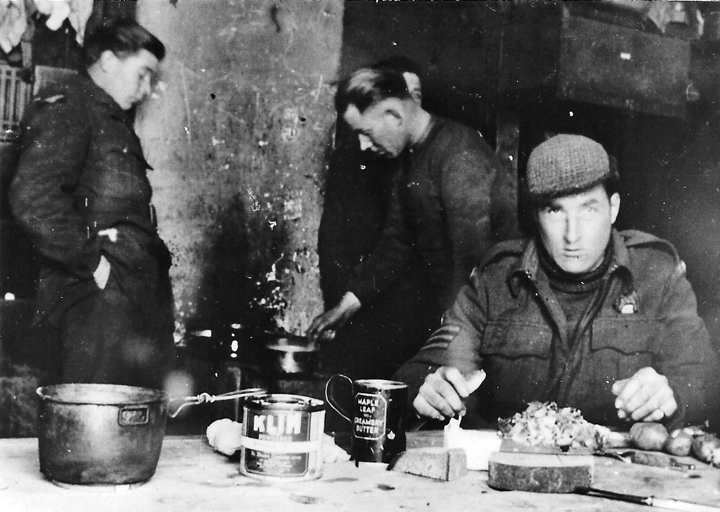 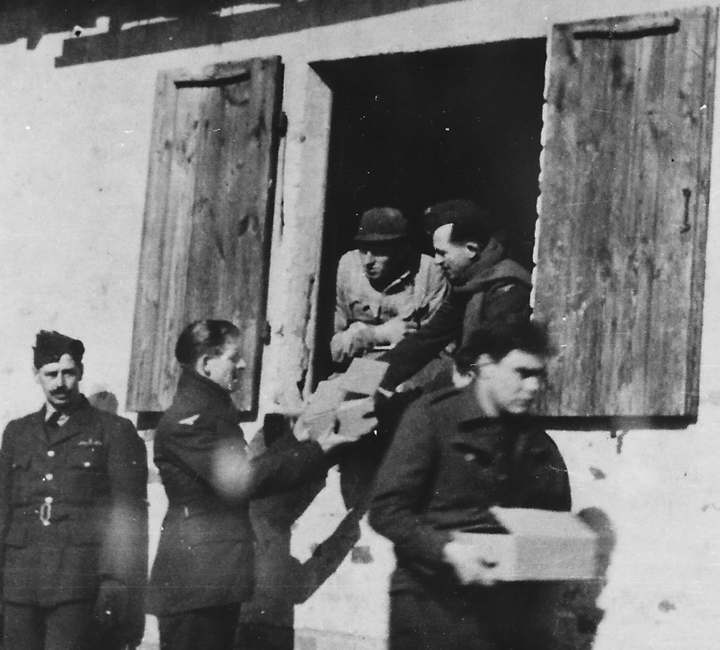 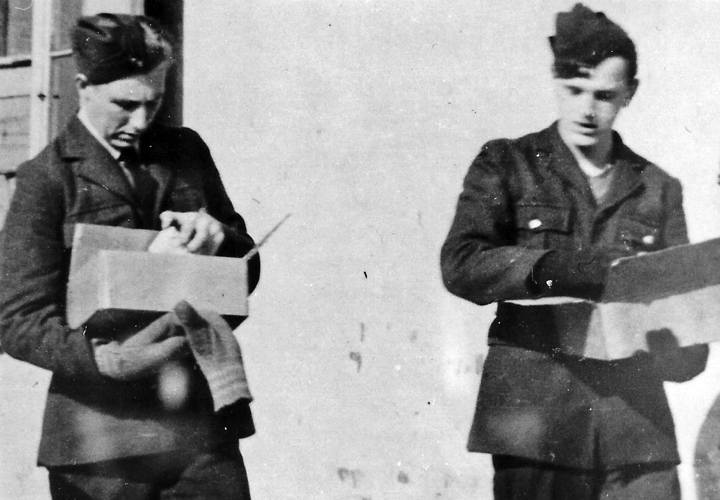 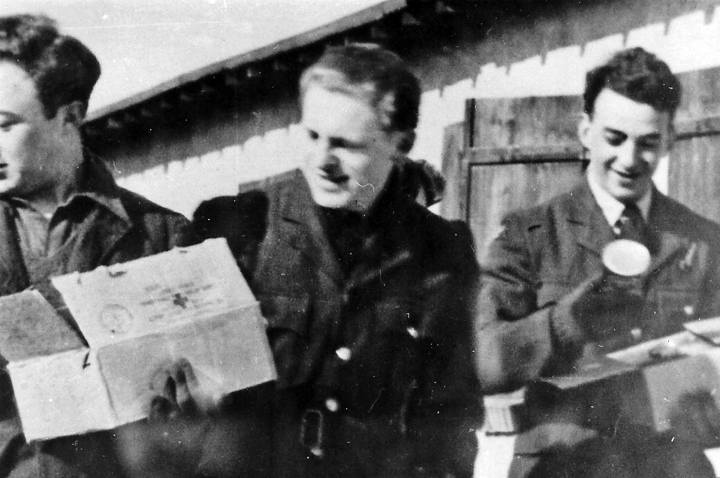 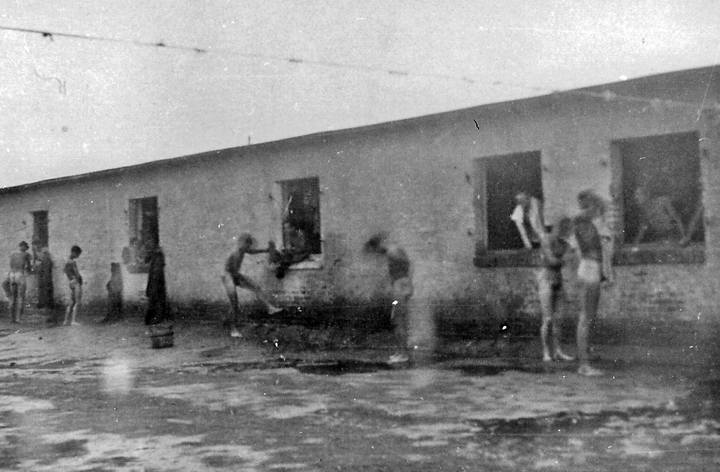 Showering outside the hut during a thunderstorm. 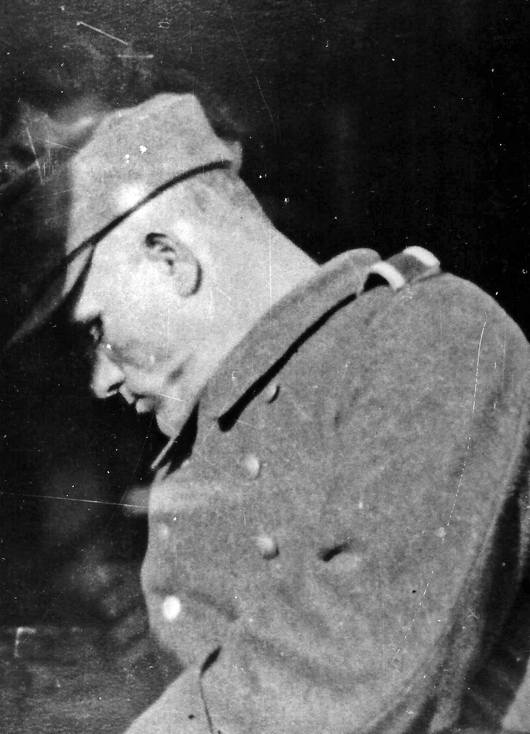 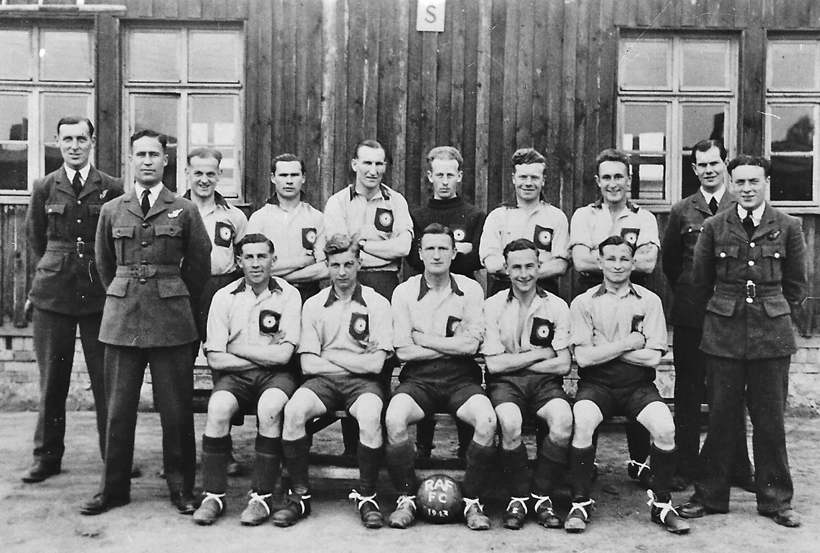