Slowly, ever so slowly, he began the journey back to the present. Through his pain the shock of the gun shots and the smell of cordite drifted to his nostrils. As his mind began to clear the realization that he was indeed caught up in the horror of war and that in a short period of twelve hours he and his crew, instead of being the hunters, had become the hunted.

This is the story of Rudy Roman, Bomb Aimer, in a crew from RCAF No. 408 Squadron, #6 Group, Bomber Command, stationed at Linton-on-Ouse in Yorkshire, England. 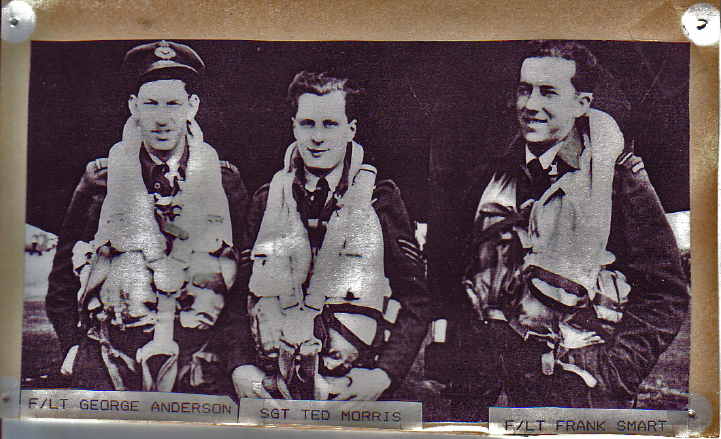 Like most crews the average age of the members was about 21 years -from the oldest at 26 to the youngest at 18. They learned early on to trust each other to do what they were trained to do and to work as a team. The months of June and July, 1944 were their introduction to the actual operational flights using the planes they would be flying when assigned to a bomber base. They made their first tentative flights close to the enemy coastline, under orders and flight plans that called for "tactical Nickle or Bullseye and Diversionary raid." Close enough to feel like battle engagements (and in some cases they were) but with withdrawal from contact to preserve the airplane and crew. Tantalizing, tactical training!

Our posting to No. 408 Squadron, Linton-on-Ouse in late August found us on a Halifax with the squadron nicknamed, "The Goose Squadron." Every crew was required to complete thirty operational raids to finish a tour of duty against the enemy and most were eager to complete the assignment and become eligible for screening. This meant they could undertake other duties unless they volunteered to fly a second tour of twenty trips. Some individuals elected to do a second and even a third tour although not many survived.

By the end of September, 1944 our crew had completed ten of our thirty engagements and had had frequent encounters with enemy fighters, flak holes in our plane from anti-aircraft batteries, and scares from the coning of searchlights which usually resulted in being shot down. Only the skill of our pilot prevented us from being casualties on many of these trips.

Now, on a welcome leave of ten days, it was a time to relax, visit friends, rest, and get ready for a new round of targets. Our crew usually went our separate ways during leave time, pursuing our own interests and finding a way to forget the war for a short time.

On October 14th, 1944, straggling back to the airfield, by ones and twos, all crew members arrived back at base before they were actually due. Flying Officer Anderson had been ill and entered hospital with stomach flu as soon as he came back.

That same day a special raid was called with every available plane and crew on call, ready for action. Technically our crew was still on leave and did not have to report but they were eager to go. Despite the pleading of their Wireless Operator Anderson who was still sick in the base hospital, they reported for duty. The target for the night was Wilhelmshaven. Picking up a spare Wireless Operator, Pilot Officer Ted Brewer, they took off for their eleventh trip.

As they winged their way through the dark sky, one of a thousand aircraft droning like angry hornets, they little knew that this night and what would transpire in the next three days would change the lives of many of them. Some would die, others be wounded, all become prisoners and some would be recorded in the historical accounts of World War II.

Over the target and under heavy fire from the ground, a burst of ack-ack from the radar-controlled guns exploded a shell in the mid-section of the plane severing some of the controls. As Frank struggled to bring the spiraling, plunging machine out of its death dive, it became apparent that the only hope for the crew's survival was to bail out. He gave the command!

After hearing the last crew member respond to his order, the pilot now found himself, moments later, floating to the ground under the silk canopy of his parachute. The glow of the burning city below and the outline of the dark coastline were the foreshadowing of event to come.

The event that made the history books, aside from the account of the raid itself, was what happened to Flying Officer Rudy Roman. It resulted in the holding of a trial under The War Crimes Tribunal for a German Corporal by the name of Johann Neitz. He was one of two soldiers convicted by Canada of war crimes. Both were sentenced to serve their time in this country.

A transcript of this trial is on display at the Bomber Command Museum for anyone who wishes to read it. It must remain at the museum and is not to be taken out.

As a result of the operation, Flying Officer John Wolfe was killed in action. Flying Officer Rudy Roman was shot by Johann Neitz while in custody as his prisoner. Rudy survived his wounds and later joined the rest of the crew, spending the balance of the war in a Prisoner of War Camp. 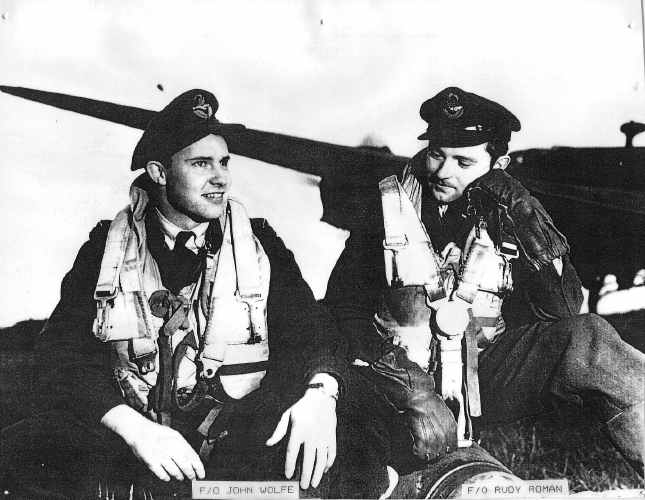 Rear Gunner Leo Dupont recalled that following his capture, "I was marched out to a waiting bus where to my surprise was the rest of my crew except for Johnny Wolfe. Rudy Roman was lying on a stretcher, naked except for my outer flying gear, which had been taken away from me earlier. The crew told me that Rudy had been shot on each side of the stomach after turning himself in.

"We travelled for some time to an outport. There we were told to carry Rudy into a Field Hospital. Bud Davies and I took the stretcher and carried Rudy into an examination room. The medical attendant roughly removed the paper gauze bandage from his wounds and swabbed his wounds. I thought I was going to faint.

"From the Field Hospital the bus proceeded to a railway station. We were ordered inside. They had taken Rudy's stretcher away and with our help he walked in. The citizens and military personnel raised hell with our presence and so we were ordered out. It was a cold, wet October night. Rudy was barefoot and so I gave him the boots which the Germans had issued to me earlier. We waited on the platform for three or more hours in the cold rain. We took turns holding Rudy up. How he survived that night is beyond me. Finally we boarded a train and arrive at the Interrogation Centre the next day."

Johann Neitz was charged with war crimes for shooting F/O Roman.
The following are from newspaper accounts of the trial.

"Air Vice Marshal R.E. McBurney will be president of the court at the RCAF War Crimes Trials opening here opening here Friday. . . The first case to be heard involves Johann Neitz, former German soldier, charged with firing two shots with intent to kill into Flying Officer Rudolph Roman of Winnipeg. There is an alternate charge of wounding a prisoner of war."

"F/O Rudolph Roman of Winnipeg told the opening session of an RCAF war crimes trial today that a German marine, after taking him prisoner, had told him to put his hand up and then had shot him twice through the body.
Standing in the witness box, the Canadian airman who parachuted from his blazing bomber in October, 1944 after a raid on Wilhelmshaven, pointed across the court at Johann Neitz and said: "That's the man there." Neitz's eyes flickered to the floor and then back to the 26 year old bomb aimer. Earlier Neitz had pleaded innocent to the charges of shooting F/O Roman with intent to kill and of wounding F/O Roman, October 16, 1944.
"Wing Cdr. Pat Durdin of London, Ontario, prosecutor, said Neitz took Roman from a lighthouse where he sought shelter and shot him twice in the side. Roman did not receive medical treatment until sometime later when he was taken to a naval hospital.
"Neitz, tall and gaunt, with thinning hair and a black moustache, looked bewildered as the case proceeded. An old ear injury made it difficult for him to hear.
"Paul Bornert, a lighthouse keeper recounted how Roman had arrived and told him how he (Bornert) went ashore in the morning and returned with a German soldier whom he identified in court as Neitz.
"Bornert said as they approached the lighthouse, Neitz said to me, 'I am not going to take him back to shore at all. I am going to bump him off on the way.' I tried to dissuade him and told him that Roman was not armed and was injured.
"Bornert said the German soldier replied, 'Nonsense, We are not going to fool around with him very long' and then pointed to a bomb crater where he said he would shoot the flier. Barnett said that while they were in the lighthouse Neitz pointed his gun at Roman's chest and ordered him to raise his hands. The lighthouse keeper added, 'They walked toward the shore and when they passed the bomb crater I said to myself, 'He must have changed his mind.' I did not watch them further but later notice a crowd of people on the shore.
"Under cross-examination by Sqdn. Ldr. Victor Collins of Dunnsville, defence counsel, Bornert replied, 'I can't say,' when asked if he did not think Neitz was bluffing. Sqd. Ldr. Collins said the previous night Neitz had rescued two Allied airmen who made forced landings."

Johann Neitz, the former German marine accused of shooting an RCAF prisoner with intent to kill, today told the RCAF war crimes court trying him that he had shot F/O Rudy Roman of Toronto after taking him prisoner near Wilhelmshaven because the Canadian officer did not follow orders.
"Neitz said he spoke in German and was not sure the Canadian understood him. He denied telling lighthouse keeper Paul Bornert, as Bornert testified yesterday, that he would kill F/O Roman on the mudflats.
"Neitz said in a statement that he and Roman arrived on shore after a walk over mudflats from a lighthouse where the airman had taken refuge when his bomber had crashed the night before.
"Neitz said he took F/O Roman prisoner in the lighthouse and took him ashore. Then, his statement said, the airman said he didn't want to go any further.
"'I told him to go on but he did not and I had to use my weapon.' Neitz's statement said, 'I shot at him'"


Pat Dixon, whose mother Con Waldron (also known as Con Dixon and Con Green) knew Rudy Roman and George Anderson,
advises that, "part of the reason he survived was because he spoke German.
His captors tried to get him to run but he could understand them and so didn't take the opportunities they offered." 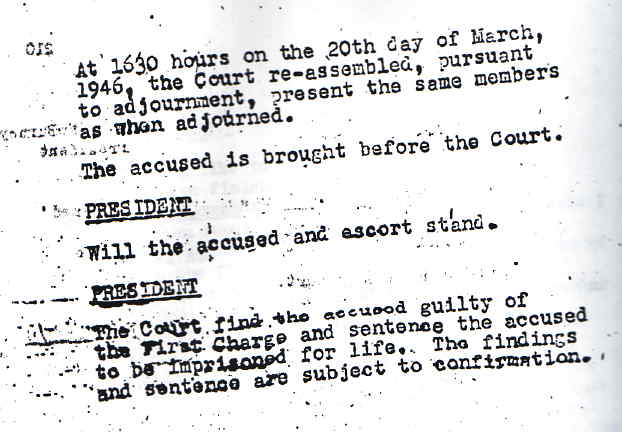