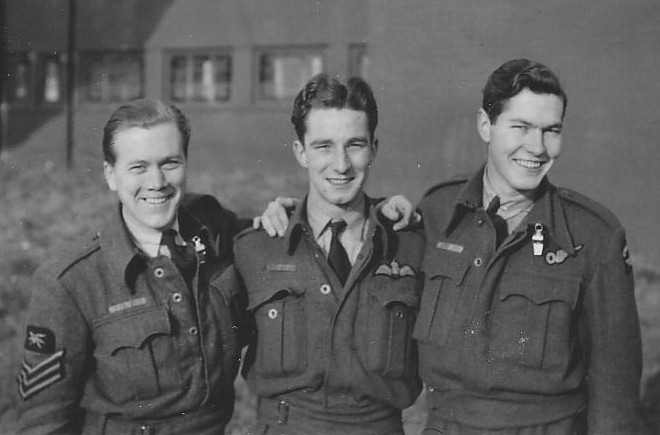 
"The next month or two proved to be more or less a shuttle service to the Ruhr, with trips to Genoa and Nuremburg thrown in just to give us a change of scenery. Then it was up to the Baltic for what was one of our most memorable trips -to destroy the V-2 development sites at Pennemunde.

"Then came a Berlin raid and it was during the run-up that Steve (pilot John 'Steve' Stephens) asked for a course out of the target. We were startled to hear Jimmy (navigator Jim Love) answer, 'Go where the -- you like. I couldn't care less.' I turned round from my set to look at the navigator's table and saw Jimmy looking as though he had a skin-full down at the Plough (our local pub). His oxygen pipe was dangling from the roof of the aircraft -He was unplugged! Once he was plugged in again he soon returned to normal. We dropped our bombs and hightailed it for home."

A sortie to Mannheim completed Jim's crew's tour of thirty operations on September 23. Jim was subsequently awarded the Distinguished Flying Cross, the citation referring to, "many successful operations against the enemy in which he has displayed high skill, fortitude and devotion to duty." 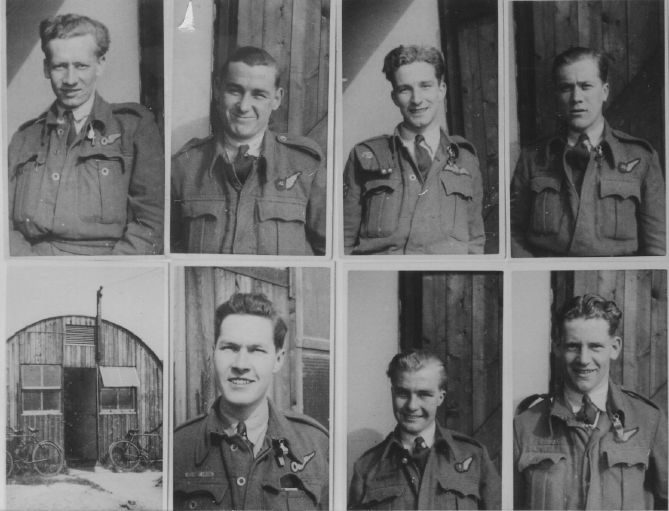 
The V-1 flying bomb could be seen and defended against by fighters and anti-aircraft guns but the V-2 was effectively invisible after it had been launched. The first Londoners knew about a V-2, was when it exploded. The rocket was 46 feet in length and, fully loaded with fuel and warhead, weighed 13 tons. From launch to the speed of sound took only 30 seconds. Its maximum trajectory height was between 50 to 60 miles for long-range targets. The warhead weighed one ton and could do devastating damage.

As part of the planning for the Pennemunde raid, a diversionary raid on Berlin by Mosquito Bombers was to be launched with the hope that German fighters would be drawn to the defence of the capital. It was thought that perhaps the first, second and even the third of the three waves of bombers would be able to drop their loads without interference from fighters. The attack was to be made from an altitude of only 7000 feet and in full moonlight. This was necessary to obtain the accuracy required to identify and destroy the individual buildings in the complex. The low-level, moonlight raid was highly unusual for Bomber Command, making it much more hazardous for the crews -there would be no hiding in the clouds on this night but the risk had to be accepted.

Jim Love's pilot, Jack Stephens, recalled, "The first thing that baffled everyone was, "Pennemunde?" No one had the slightest idea where it was or what it was -we were to find out! There were two other aspects of this raid that were puzzling and rather scary. We were to bomb from 7000 feet rather than our usual 18-20,000 feet and it was a full moon."

The Pennemunde raid was considered to be one of the most important of the war and this was emphasized by a personal message to the crews from Bomber Command chief, Arthur Harris. Jim Love recalled very clearly the warning that the squadrons were given, "If you don't knock out this important target tonight it will be laid on again tomorrow and every night until the job is done (regardless of losses)." The airmen had not heard anything like this before. Sergeant K.W. Rowe of No. 434 Squadron recalled, "There wasn't the usual babble and horseplay and I remember coming out onto the airfield, right into the rural surroundings and sunshine and I thought, 'This can't be happening to us on such a lovely day.'"

A total of 596 bombers including 62 from the Canadian No. 6 Group took off during the evening of August 17, 1943. The first wave of two hundred aircraft was due to start the attack at 00:15, with the second attacking at 00:30 and the third at 00:45 hrs. Jim Love's squadron was part of the second wave. The Canadian aircraft were part of the third.

Of the flight to the target, Jack Stephens wrote, "The trip out was uneventful but very scary -flying a bomber at night with a full moon is like walking down your busiest road -naked! Everyone can see you. You are a sitting target for every fighter in the Reich. You want to hide but there's no place to go.

Jack Stephens recalls, "We bombed and turned on a reverse course for home. It was then it seemed that fighters were everywhere. I saw a Lanc ahead of and below us, clearly visible in the full moon. All four engines were on fire and the fighter was standing off, following it down. Then I saw tracers streaming out from the rear turret but the fighter was obviously out of range. In my mask I was silently screaming, 'Get out, get out.' The tracers continued to stream out and then it was too late. He hit the Baltic and it was all over. He is my unknown V.C.

"Twice on the way back fighters maneuvered into position for attack and each time they were spotted in time and conversely the full moon was our salvation. With the fighter below and behind, a turn up-moon brought the fighter into full view while we on the dark side became invisible to him. The Gods were with us that night."

Bob Charman, another navigator who became a Nanton Lancaster Society member, recalled, "All over the sky planes were going down in flaming infernos. I had barely given Frank (Frank Brady, his pilot) a course for home, when Jimmy Fletcher, the tail gunner, broke in with evasive action. A Ju-88 was bearing down on our tail. We went down into a dive, trying to avoid the fighter. Then the aircraft quivered, like in killing poultry you strike the brain with a knife and the feathers release -that is the way the aircraft felt. A horrible smell of gunpowder enveloped the aircraft and the wireless operator lay beside me dying, with his entrails exposed. . ." Bob was one of only two crewmembers of his No. 427 Squadron Halifax to escape and become a Prisoner of War.