P/O Sutherland completed thirty-five operation on Lancasters with 207 Squadron. It is truly amazing that the first nine he completed were to Berlin, during what became known as 'The Battle of Berlin' -a time when Bomber Command experienced huge losses. During July 1944, he was awarded the DFC, the citation reading,
"One night in June 1944, F/O Wallace McIntosh and P/O Sutherland were rear and mid-upper gunners respectively of an aircraft detailed to attack Cerisy. Just after crossing the enemy coast, Flying Officer McIntosh sighted a Junkers 88 coming in to attack. He promptly warned his pilot who took the necessary combat manoeuvre. Both gunners then opened fire, hitting the enemy aircraft with well placed bursts, causing it to spin towards the ground with both its engines on fire. Almost immediately another Junkers 88 was sighted. As the enemy aircraft came into range, Flying Officer McIntosh and his co-gunner met the attacker with devastating bursts of fire which caused it to explode in the air. Half an hour later, these gunners engaged yet a third enemy aircraft. Following their accurately placed bursts of fire, the enemy fighter fell away and was seen to catch fire before it hit the sea. Flying Officer McIntosh and Pilot Officer Sutherland defended their aircraft with great skill and resolution and undoubtedly played a large part in its safe return. Their achievement was worthy of high praise."

During December 1944, Larry was awarded a Bar to his DFC (essentially a second DFC), the citation reading,
"Pilot Officer Sutherland is an air gunner with a fine operational record. He has participated in the destruction of seven enemy aircraft and damaged one. Three have been destroyed since the award of the Distinguished Flying Cross. His aircraft have been in combat on other occasions and his accurate gunnery and coolness under fire have been outstanding. In July 1944 the bomber in which he was flying was attacked five times by enemy fighters near Stuttgart. This officer assisted in destroying two of them and driving off the remainder."


Other reports on Larry's combats include:

5 Group aircraft Lancaster "M"of 207 Squadron, 4904N 0134W at 0156 hours, height 8,000 feet, when a Ju.88 was sighted against the moon on the port quarter coming in to attack. Both gunners kept firing whilst the E/A was attacking, which was seen to break away with both engines on fire and spiral down out of control, vanishing into cloud still on fire. The Ju.88 is claimed as destroyed. Then at 40906N0137W at 0157 hours, height 8,000 feet, the W/Op gave warning of an E/A. Both gunners sighted a Ju.88 and opened fire. The E/A kept coming in, and at 150 yards was seen to explode under the tail of the Lancaster. The Ju.88 is claimed as destroyed. Again, at 0231 hours, position 5040N 0245W, height 7,500 feet, the Rear Gunner sighted a Me.410 dead astern. The E/A opened fire which was returned by both gunners, observing strikes, and a fire in the E/A, which dived down and was seen to hit the sea and disappear. The Me.410 is claimed as destroyed.

5 Group aircraft Lancaster "M" of 207 Squadron, position 4740N 0526E, at 0157 hours, height 4,000 feet, when Rear Gunner sighted a Me.109 on starboard quarter up. The E/A was seen to bank and attack on a curve of pursuit. Both Rear Gunner and Mid Upper Gunner fired scoring hits on the E/A's nose and starboard wing; they continued firing at the E/A until it burst into flames, dived down, hit the ground and exploded. The Me.109 is claimed as destroyed.


Larry's thirty-six operations are listed below. Note the Berlin sorties:

Another report reads,
Nine attacks (actually a total of ten) on Berlin are included among the 35 successful sorties completed by this Air Gunner who has proved himself an invaluable member of his crew.
This officer has shared with the other gunner seven enemy aircraft destroyed and one damaged, three of these being destroyed since his last award for destroying three in one night.
On the 28th of July the aircraft in which he was flying was attacked five times by fighters near Stuttgart. Pilot Officer Sutherland assisted in destroying two of them and in driving off the remainder. This officer's coolness under fire and the accuracy of his shooting has been an example to the remainder of the squadron.
Pilot Officer Sutherland has proved himself a keen and reliable gunner whose outstanding coolness and courage in the air have been a great asset to his captain.
P/O Sutherland escaped death on several occasions, including a training flight crash, a malfunctioning oxygen mask at 5,500 metres and having his plane hit by enemy fire on several occasions. On his last operation, his Lancaster landed with only one of four engines operating.


In 2010, Larry's nephew, Gary Chisholm, wrote his uncle's biography which he titled, 'The One Eyed Gunner'. He wrote,
"In the whole of Bomber Command during the Second World War, there were only three heavy bomber aces. An air gunner or a fighter pilot was considered an ace after achieving fine kills, with no losses of his own." 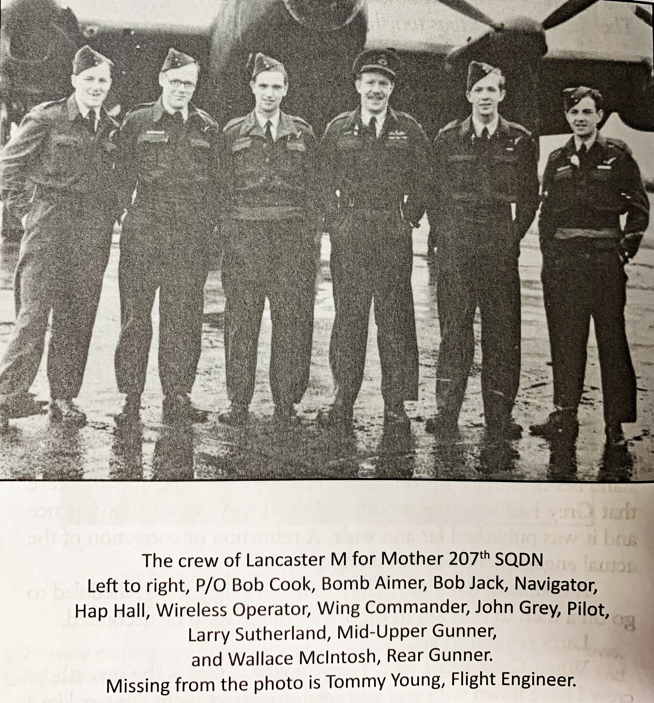