My father, Joseph Barber, was born in 1901(day and month unknown) in Sunderland, County Durham, England. I am the youngest of his three children and was born in 1930.

At the beginning of the Second World War my Father was turned down from volunteering for the military because of his trade as a bricklayer, and also because of his age. He volunteered numerous times after that, to no avail. Finally one day, in frustration, he took out his Birth Certificate and, as I watched and clearly remember, folded it repeatedly -back and forth, so that eventually the date of birth could no longer be read.

Then he volunteered again and was accepted into the Royal Air Force for training as an Air Gunner. After training he flew in Lancasters and the odd raid in Halifaxes. His rank was Sergeant, Air Gunner. According to his logbook, he had completed seventeen operations when his aircraft failed to return from a raid on Duisburg on the night of 21/22 May, 1944.

I was thirteen at the time, and the biggest regret of my life is that I was unable to grow up under his guidance. He is buried in a Commonwealth Cemetery in Antwerpen (Antwerp) in Belgium, where my wife and I visited last year. There were five other graves, owing to the fact that the Flight Engineer managed to get out of the doomed Lancaster as it went down.

Incidentally, because of my Father's service in the RAF, I learned to fly in 1970 and for a short time I flew a Cessna 172.

Thank you again for the privilege of being allowed to enter the Lancaster bomber in Nanton. I will never forget this chance encounter as we passed through your town on vacation. 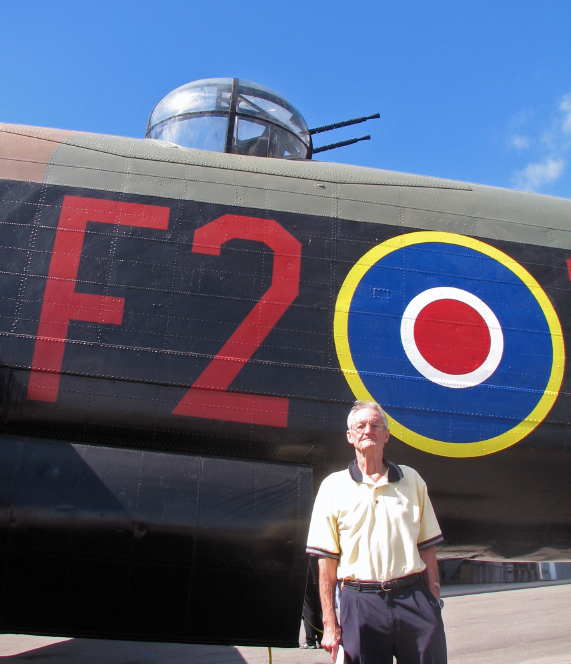