Buried in "The Field of Honour" Burnsland Cemetery, Calgary, Alberta

During the summer of 1939, Jack worked on his uncle's road construction crew. Then, unknown to him, his aunt, assessing Jack's potential, registered him in Accounting at the University of Saskatchewan. Feeling pulled apart, he attended 1st year accounting (1939-40) and then left to work in the Turner Valley Oil fields in Alberta. Here he had another aunt, uncle and cousins near his age, so he enjoyed the move. He apprenticed as a welder for Imperial Oil (Royalite Branch).

Jack's father died in 1941. Jack had new pangs of guilt regarding the military but harboured these until the summer of 1943. A new surge of recruiting was answered by many of his friends so he headed to his mother's home (now at Lumsden, Saskatchewan). After placating her, he joined the RCAF in August 18, 1943.

His training in Canada took him to Edmonton and then Regina. While at Regina, he was walking downtown in his dress uniform and decided he would stop and buy a white silk scarf which he had admired when worn by some RCAF fellows. He donned the scarf and continued walking. He met an Airforce officer and they saluted. The officer stopped and asked, "Lad, are you an officer?" Jack enthusiastically said, "No, not yet Sir." The officer said, "I think you should save your scarf until you are." Jack received his commission when he returned from overseas and wore his white scarf. He even continued to wear it well into the 1950's with his Airforce issue, blue Burberry.

At Regina, I presume, in recognition of his agility, quickness of thought and action, his expertise with firearms (due to his training by his perfectionist father during boyhood hunting trips) and his "20-20" vision that made him a 'crack-shot', he was transferred to MacDonald, Manitoba, for Air Gunnery Trainings on Bolingbroke Aircraft from Jan 31st, 1944 to April 21, 1944. Then he transferred to Lachine, Quebec. He shipped out to England on an over-crowded troopship, June 1944.

They were credited with 9 successful "night bombing" Ops plus one trip March 7, 1945 - destination Dessau - developed engine trouble - landed with full bomb load in a field outside of Riems, France. They spent 4 hours at Riems Cathedral. Jack stated in a letter that they "saw quite a few statues of Joan of Ark and some German POWs - also that they weren't allowed to eat in any of the cafes in town (no service men). They ate at an American lunch stand for the troops. They flew back to England March 9, 1945 on 3 engines (where were the bombs???). I never asked!

I only found out about this landing in the fall of 1959 (en route to Quebec City to a tax conference). We were seated over the wing of a TCA plane (Jack's first flight since the war and my first flight ever). Jack became agitated, thinking the plane was "icing up". He said, "Three strikes and you are out!" I did know about his parachuting into Germany (POW) and I thought if we were in trouble that would be "Strike Two". Then the story of their visit to France came out:


Jack wrote in a letter home, when back in England, that he had seen all 7 chutes clear of their flaming plane to join German guards on a march from the Rhine River toward allied forces line in Holland. The German guards were well aware that they were defeated and hoped that by keeping the POWs safe they would be less liable to be killed (win "Brownie points", as Jack put it) when they reached our allied line. The guards did not want to be captured by the Russians who were approaching on the Eastern Front.

Like so many others, Jack told very few stories of his experiences and kept a lot bottled up in his mind. Escaping without physical injuries did not mean the things that happened did not take their toll. War is won by NO ONE.

Things he did tell us:


When our POWs were actually rescued, the German guards were grateful that they were simply told to find their own way to their homes. Jack knew that one guard had good boots for his travels. 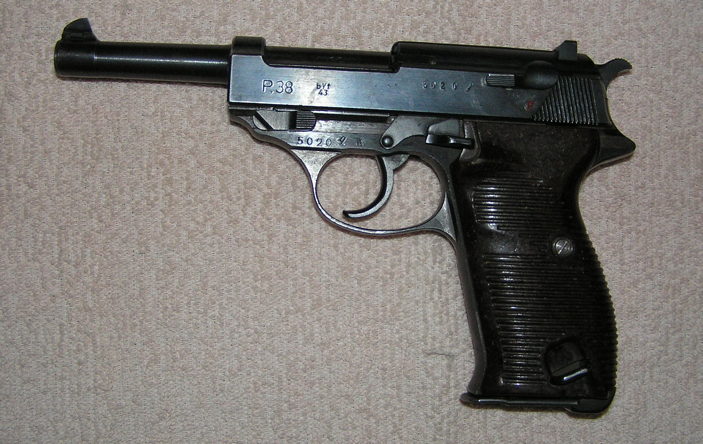 The P38 that Jack acquired by trading a pair of boots with a German guard.
Like all firearms in the museum, it has been rendered inoperable.


On May 11, 1945, Jack and Ross Duke were repatriated to beautiful Bournemouth, England. When they arrived, the lovely seaside resort was occupied by Prisoners of War from the Italian Campaign. Jack wrote, with great resentment, "They have been pampered here while we walked and scrambled for food and to escape being strafed. Not Fair!!"

Bill Spence and Art Goodier also arrived. They had walked south from the point of their capture but were fine as well. Jim Hadley, John MacKenzie and Dan Frame never returned. Quoting the book, They Shall Not Grow Old, Page 241: All three are buried at Rheinberg, Germany. This book is available for reference at Nanton's Bomber Command Museum.

Jack sailed from England to Halifax in June, 1945. His relatives and the town of Lumsdon held a "Welcome Home" for him on June 30th. Jack received his discharge on Sept. 19, 1945 at Calgary and returned to Turner Valley. Royalite Oil Company offered all previous employees, who had been in the services, an opportunity to resume employment. Jack did not go back to his welding but worked as a chart reader for oil production accounting.

Nanton and the Bellamy family have many strong ties:

When Jack's brother, Dr. R.P. (Dick) Bellamy and his wife, Dr. Lorna Bellamy, were discharged from the army, they set up medical practice in Nanton from 1946 - 1952. Two of their 4 children were born during that time.

More coincidences followed: After Jack passed away, I married Jack and Dick's good friend, Howie Armstrong. My son, Rick, and daughter, Carol, were schooled in Nanton. Howie was the owner of the Nanton Stedman's Store and was a wonderful town advocate. In 1960, he and his friends, George White and Fred Garrett, bought and moved the Lancaster (from Government salvage at Vulcan, AB) as a tourist attraction for Nanton. They later donated it to the town and for 30 years it sat beside the highway as a tourist stopper.

The very enthusiastic young group, "The Lancaster Society", was formed and in 1990 the first hanger was built to get the "Lanc" inside and repairs started. What a success!!

Howie's family, Judy Armstrong Robinson and Tink Robinson, Jan and Sue Armstrong and Brent Armstrong are strong promoters of The Bomber Command Museum. Judy and Tink's son, Dan, flew with the Canadian Airforce Snowbirds (1996-97) and his #4 Tutor jet is on display at the Museum.

Further to Nanton's influence on the Bellamy/Armstrong history - I, Shirley (nee) Calkins-Bellamy-Armstrong, was born while my Dad and Mom (Dick and Sue Calkins) worked on the "Upper Place" - P Willow Creek ranch for Rod MacLeay (1924 - 1929). No wonder I feel my roots are here!