A number of factors had to be precisely measured prior to being utilized within the bombsight to attain the accuracy required. The aircraft's groundspeed, airspeed, and altitude had to be determined and, as well, the outside air temperature at the point of release was critical.

As the target was approached, the pilot had to hold his exact course for about ten miles while the flight engineer manipulated the throttles to maintain a constant speed in order to determine the wind drift. This need to fly straight and level ruled out the possibility of any evasive action, leaving the aircraft vulnerable to radar-predicted flak and fighter attacks during the bomb run.

The accuracy that 617 Squadron was able to attain with the SABS was truly remarkable. Their bombs were generally dropped from between 12,000 and 17,000 feet while flying at a speed of 200 miles per hour and several miles back from the target. From that height and distance even the white square on the bombing range looked like the size of a pin-head. Clearly, 'Danny' Daniel became very capable at utilizing the SABC bomb sight.

Daniel was part of S/L McCarthy's crew during the night of 5/6 June when they flew two operations in support of Operation Taxable. During this operation, 617 crews flew precise courses parallel to the French coast, deploying 'window' (aluminium foil) so as to create images on enemy ground based radar that indicated allied landing craft approaching to the north of the actual invasion beaches.

The 12,000 pound bombs that 617 Squadron had been using for some of its operations since the Dams Raid, two of which Daniel had dropped, had very thin casings and would simply shatter when dropped on solid concrete. However Barnes Wallis, whose creative mind designed the Wellington Bomber as well as the techniques and weapon that enabled the Dambusters Raid to be successful, had been thinking of these sorts of problems and developed plans for a very heavy, strong-cased, and extremely streamlined 12,000 pound bomb that could be dropped accurately from a great height immediately next to these challenging, concrete targets.

Named Tallboy, the weapon would exceed the speed of sound prior to reaching the ground and impact with such energy that it would penetrate deeply underground prior to exploding following a pre-set time delay. A series of 'earthquake waves' would then fracture and hopefully collapse the nearby concrete structures and tunnels.

The bomb casing was made of special chrome molybdenum steel, cast in a single piece to ensure that it would survive the impact. Near the tip of the bomb, this casing was over four inches thick. This was then filled with 5200 pounds of Torpex D1 explosive. The bomb was twenty-one feet long with fins that were placed at a five degree angle so that it spun as it fell, reaching a maximum rotational velocity of 300 rpm. This improved the aerodynamics and thus the accuracy.

When dropped from 18,000 feet, Tallboy took thirty-seven seconds to reach the ground where it impacted at 750 mph and, depending on the characteristics of the material it struck, penetrated to a considerable depth. Unlike conventional bombs, Tallboys were suspended in the bomb-bay by means of a heavy cast-link chain which was secured with an electrical release.

During May 1944, the first Tallboys were delivered to 617 Squadron at Woodhall Spa. They were first utilized one two days after the D-Day invasion and 'Danny' Daniel dropped one of them. The squadron was successful in eliminating enemy railway traffic through a tunnel near Saumur, some 125 miles south of the Normandy beachheads.

On 4 July 1944, Daniel flew his last of fourteen operation with S/L McCarthy. There were major changes on the squadron with W/C J.B. 'Willy' Tait replacing Leonard Cheshire as the squadron commander and S/Ldr. McCarthy and other 617 veteran airmen taken off of operations. F/O Daniel then became W/C Tait's bomb aimer, another indication of his being held in high regard. His first operation with W/C Tait was on 16 August.

Commissioned in 1941, the German Navy's mighty 42,900 ton Tirpitz posed a grave threat to Allied shipping. Sister ship to the more famous Bismarck, the battleship carried a main armament of eight 15 inch guns. She saw limited action, spending her war career in Norwegian waters where she was a constant danger to Allied convoys bound for Russia. Her presence obliged the Allies to maintain a large fleet in northern waters to guard against her and repeated attempts were made by both the Royal Air Force and Royal Navy to sink her.

These attacks were somewhat successful but little effect on the battleship's double layer of armour plate could be expected until the Tallboys became available.

Daniel was W/C Tait's bomb-aimer for all three of Tait's operations against the Tirpitz including the final attack on November 12, 1944 that sunk the battleship.

F/O Daniel was awarded the DFC during October 1944. The citation reads, "Flying Officer Daniel has taken part in numerous sorties and has proved himself an outstanding member of aircraft crew. In September 1944 he was the air bomber of one of a bomber force which attacked the German battleship Tirpitz. In October 1944 he took part in an attack on the sluice gates at Kems Barrage. On both occasions he proved his skill as a bomb aimer. His excellent work contributed materially to the successes obtained."

F/O Daniel's last of eleven operations with W/C Tait was an attack on the submarine pens at Ijmuiden on 15 December. 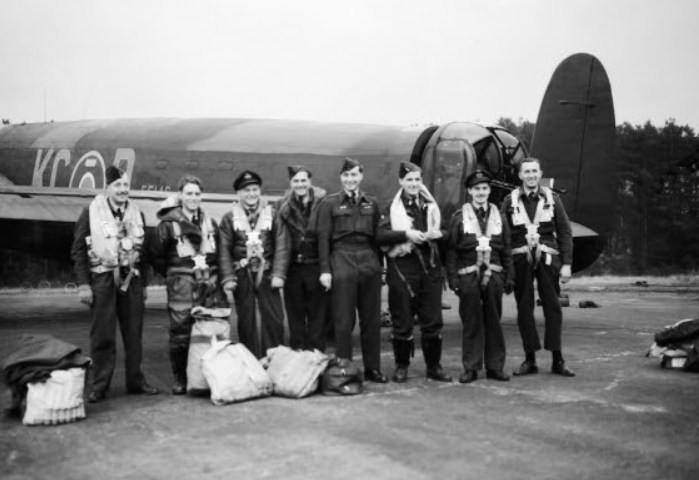 
Canadian Johnny Fauquier had served two tours of operations with 405 Squadron where he had been the commanding officer. He then served at 6 Group Headquarters for a time, but he longed to be back on operations and, during December 1944, persuaded Ralph Cochrane, the officer commanding Bomber Command's 5 Group, to give him command of the Royal Air Force's 617 Squadron.

F/O Daniel's first operation with the new squadron commander was on 31 December, 1944. Daniel flew a total of twelve operations with W/C Fauquier and two others with F/L Trent.

Although the 12,000 pound Tallboy had been in service for nine months, Barnes Wallis's original concept had been to build a similar, but much larger weapon that would have a weight of 22,000 pounds. Grand Slam was the culmination of five years-worth of bomb design and now, with the modified Lancasters, it could be put into action. Identical in shape to the Tallboy, when in production the Grand Slams weighed 22,400 pounds, had a length of twenty-five feet, five inches and a diameter of 3 three feet ten inches.

Like the Tallboy, the Grand Slam's fins were designed to generate a stabilizing spin of up to sixty revolutions per minute and, like the Tallboy, it had a thicker case than a conventional bomb, allowing it to penetrate deep into the earth or to pass through extremely thick reinforced concrete roofs.

F/O Daniel's last operation was on 19 April when thirty-six Lancasters from 9 and 617 Squadrons attacked the heavy coastal batteries at Heligoland that barred allied access to the ports of northwestern Germany. As was almost always the case, Johnny was flying, leading his squadron in what would be his 93rd combat operation of the war. Daniel dropped his Grand Slam from 11,000 feet on his second run, the bomb striking the ground about twenty yards east of the gun emplacement area. Fauquier noted that the, "Bombing was concentrated except for two overshoots seen on cliff to the south of the target."

It was 'Danny' Daniel's fiftieth operation, all of which were with 617 Squadron. He had dropped a total of twenty-four Tallboys and returned to base with five more after attacks were recalled or it was determined hat the target had been destroyed. As well, Daniel had dropped two Grand Slams on the submarine pens at Farge and at Hamburg.

F/O Daniel retired from the RCAF on 7 September 1945. He passed away in Melville, Saskatchewan on 15 September 1994.