The Story of Lancaster AJ-M

John Fraser was an RCAF bomb-aimer from Nanaimo, B.C. He had completed a tour of thirty operations with No. 50 Squadron prior to being selected to join No. 617. W/C Gibson permitted him to leave the base to be married on April 29. He returned to Scampton the next day and didn't see his wife Doris again until May, 1945.

John Hopgood was F/Lt Fraser's pilot. Highly regarded, he was selected from No. 106 Sqd having served there under Gibson who wrote, "As soon as I saw him I thought, 'What an ideal squadron type. I like that chap.'" 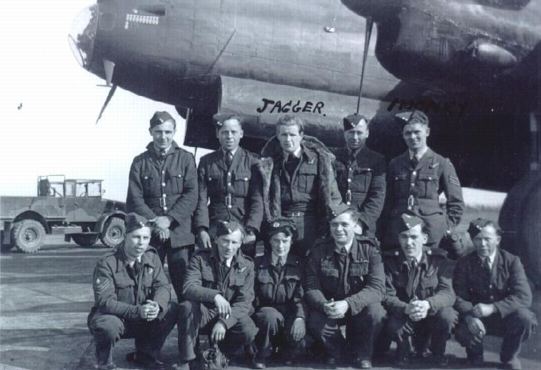 Fraser is at far left in the front row.


Flying To The Mohne Dam

Like all the attacking aircraft, Lancaster AJ-M flew to the Dams at an extremely low level. At one point the rear gunner, Tony Burcher, saw a looping arc of high tension cable above his line of vision. It then seemed to drop away behind the aircraft as Hopgood gained height. "Right under the bloody things!" exclaimed the front gunner. "Sorry about that," said Hopgood.

Soon after that AJ-M was raked by ground fire. Burcher was hit in the groin and stomach. A searchlight blazed onto the aircraft but Burcher shot it out. Then a shell burst alongside and Hopgood feathered an engine that had been set on fire.

As well as Burcher being wounded, John Minchin, the wireless operator, had been hit in the leg and the front gunner did not respond over the intercom, having been seriously injured or killed. The flight engineer shouted, "Christ, look at the blood" as he held a handkerchief to his pilot's head. "I'm OK," shouted Hopgood. "Carry on and don't worry."

It was still an hour to the Mohne Dam and F/Lt Hopgood could certainly have returned to base with honour. But his character and determination was typical of those chosen for No. 617 Squadron and he pressed on to the target.

AJ-M was the second aircraft to attack. John Fraser recalled, "Gibson got away with it because he had the element of surprise.They (the guns in the towers) crossed up on us and the light flak battery came in on the side. We had to fly through the middle of it. I released the bomb. We were put on fire in the starboard wing. The one engine came on fire immediately. We flew on and the pilot gave the order to abandon the aircraft within about 25 seconds after we passed over the dam. I knelt facing forward over the escape hatch and I saw that the trees looked awful damn close. I thought there was only one thing to do and that was to pull the rip cord and let the pilot chute go out first and then let it pull the chute out and me after it and that's what I did. I rolled out and the tail wheel whizzed by my ear. I swung to the vertical and within 2 or 3 seconds I touched the ground. While I was in the air, before I touched the ground, the aircraft crashed about probably 1500 or 2000 feet away from me."

"Get out you damn fool," Hopgood shouted to the rear gunner, "If only I could get another 300 ft. I can't get any more height." He was struggling to get enough altitude so that some of his crew could escape. He knew that he would not survive. Burcher was struck by the tail plane as he jumped from the crew door. His back was broken but he survived. 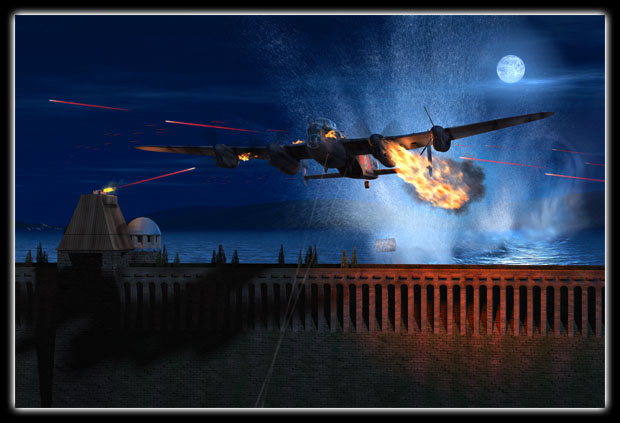 "COURAGE BEYOND FEAR" by Len Krenzler [ www.actionart.ca ]
Lancaster AJ-M over the Mohne Dam
Presented to the museum by Shere Fraser Lowe and Fred Sutherland 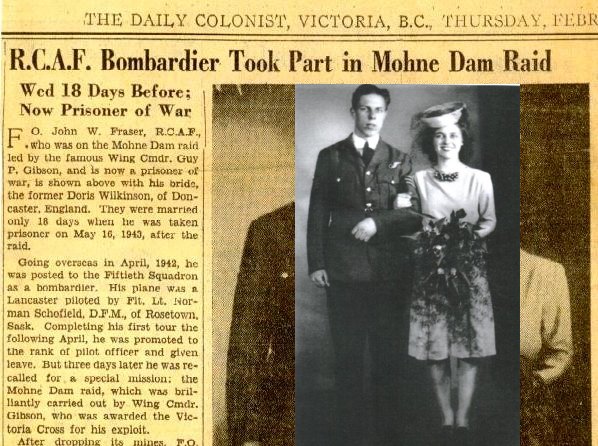 The original wedding photo used in this newspaper article is shown superimposed over the article.


A note in the family album written by his wife Doris reads, "I received a letter from John on June 29, 1943 telling me he was safe and well and a prisoner of war in Germany. He baled out at 300 ft. and landed uninjured. F/Lt. John Hopgood was his pilot and to him John owes his life."