Located 30 km north of Nanton,
the Town of High River has played a significant role
in Canada's aviation history.

Early in 1921, the Canadian Air Board commenced flying operations at High River using a grass field northeast of the town. The unit had originally been established at Morley, Alberta in 1920 but the flying conditions near the mountains were less than ideal for the small aircraft. The aircraft, which had been donated to Canada by the British government after the First World War, were to be used for civil operations exclusively. The High River Air Station was one of several operated by the Air Board that would be used for civil operations. Control of the air station would be the responsibility of the Canadian Air Force, and later, the Royal Canadian Air Force.

Four portable "Bessoneau" hangars that had been used by the Royal Flying Corps in France had also been donated by the British. The hangars were erected, and associated buildings were constructed. The hangars were canvas-covered with strong wooden frames. An experienced crew could erect one in a few hours. They had canvas curtains instead of doors and the dirt floors and lack of heat were serious disadvantages but they were the only shelter available at the time that they were used in High River and also at Rockcliffe, Ontario.

Sub-stations were located at Pincher Creek and Eckville. With ten aircraft in service that summer, High River enjoyed the distinction of being the site of the largest air station in Canada. 284 flights totaling over 700 hours in the air were recorded during that first summer. Most of the flights were patrols over the forestry reserve with the hope of spotting fires in their early stages. One of the aircraft went to Jasper, flying the park's superintendent about the park collecting survey and other information.

Under the auspices of W.W. Grant, the station was also very involved in radio that was then in its experimental stages. In 1922, the most powerful transmitter in North America was operated at the air station and when Grant was able to speak with someone in Hawaii it was hailed as a miraculous new step. Grant went on to establish the first commercial radio station in Alberta.

The purpose of the station was to fly daily fire patrols over the foothills and mountains between Eckville and Pincher Creek. A huge fire had recently destroyed vast areas of forest in southern Alberta. The station was also involved in air photography, the collection of air samples for botanical studies, and even dropped mailbags to the Prince of Wales when he was visiting his E.P. Ranch west of High River. Early experimentation in the field of parachuting was undertaken at the base and in 1925 a jump from a D.H. 4 aircraft piloted by Punch Dickens, who was then an officer at the base, was an impressive accomplishment. By 1930, a series of look-out towers had been established along the eastern slopes of the Rockies and the forest protection flights were curtailed. Some flight testing continued until the station was closed in 1931. 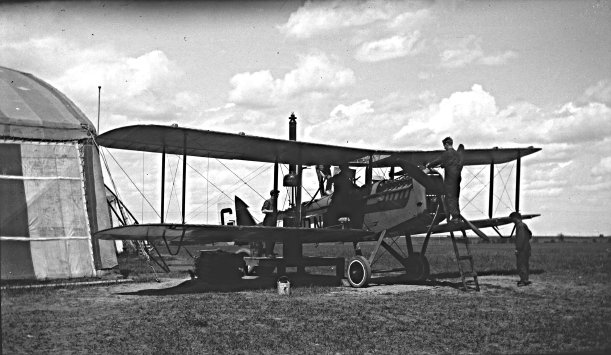 DH-4 aircraft with a portion of a Bessonneau hangar at left.
[ courtesy Norm McRae ] 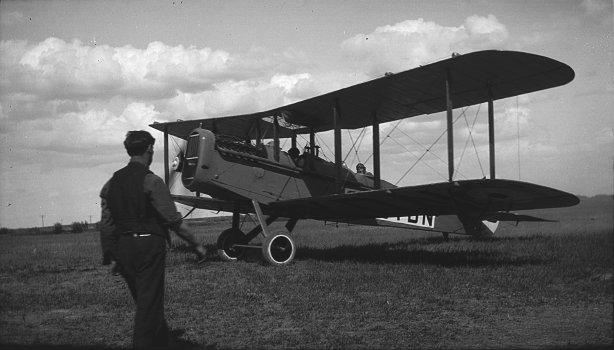 
The Calgary Aero Club had been active since 1927 flying out of an airfield in the Renfrew district of northwest Calgary. Upon the outbreak of war, the club was one of the largest in the British Empire, with 1000 listed members so it is not surprising that it was selected to spearhead southern Alberta's involvement with the BCATP. A contract was signed whereby the Club agreed to operate an elementary flying training school. The club members recommended High River as it had been used frequently by instructors and was thought to be suitable. However, Lethbridge was selected as the site and in early 1940 hangars and associated buildings were constructed and training commenced in July. Bill Smith was the original Chief Flying Instuctor. There were nine instructors and 24 students were in the first class.


However, high winds in the area proved to be a problem. In fact many landings were accomplished by "bulldogging" the Tiger Moths. Ground crews on the flatbeds of trucks on either side of the aircraft would reach out and steady the wings and assist in taxiing back to the hangars. The school was moved to High River in June, 1941 and the Lethbridge facilities became home to a Bombing and Gunnery School.

Most of the staff were civilian but gradually many of the instructors became RCAF officers. The instruction of pilots for the war overseas was, of course, the priority of any BCATP school. However the social background to the instruction played an important supporting role. #5 EFTS had an orchestra, band, recreation hall, a stable to house the horses used by the riding club, and a recreation hall that was used regularly for concerts, dramatic productions, and movies. 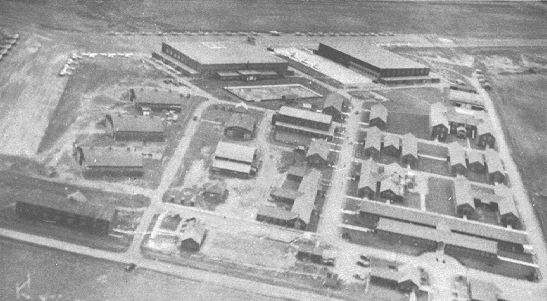 No. 5 EFTS, High River prior to the construction of runways and the second hangar.

During 1943 the size of the school was doubled and a second hangar constructed.

The BCATP's efforts to train pilots had been very successful and during 1944 it became clear that there would soon be an excess of qualified airmen. In March, 1944, the impending closure of the base was announced and by October operations were being wound down.

The main hangar still stands at the former site of No. 5 EFTS. An addition has been added to the south side and it is currently occupied by Willow Creek Homes Inc, a company that manufacturers modular housing. The building may be seen to the west of Highway #2, about two km north of High River. The owners are very aware of the history of their facility and proudly fly an RCAF flag outside the building.

Nanton's Warren Twins trained at the base and went on to fly Spitfires during the war. As well, Murray Peden, a Stirling and B-17 pilot and author of the highly acclaimed book, "A Thousand Shall Fall," learned to fly at No. 5 EFTS.


The managing director of #5 EFTS from its opening in Lethbridge in 1940 until its closure in High River in 1945 was Dennis K. Yorath. The school was said to have been one of the most outstanding in Canada, noted for its efficiency of administration and operation. For his work in directing the school, Dennis Yorath was awarded the M.B.E. in 1946.

Mr. Yorath enjoyed an extensive career in aviation. He was became a charter member of the Calgary Flying Club in 1928 and remained active with the organization until after the war when he began to play a nationally significant role with the Royal Canadian Flying Clubs Association. He was named a member of Canada's Aviation Hall of Fame in 1973 with the following citation, "His business management abilities, coupled with a far-sighted appreciation of the country's civil flying requirements, were a prime factor in establishing a national pilot training scheme that has substantially benefited Canadian aviation." 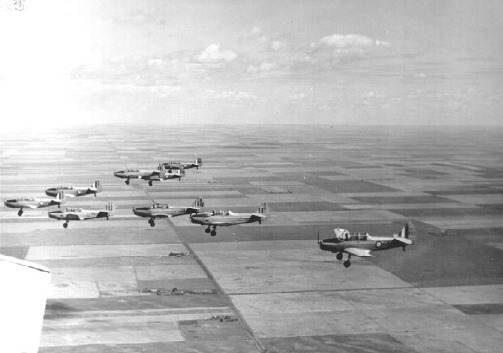 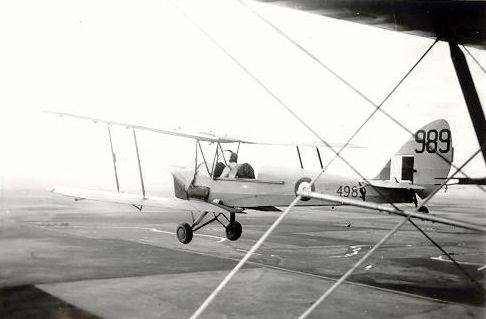 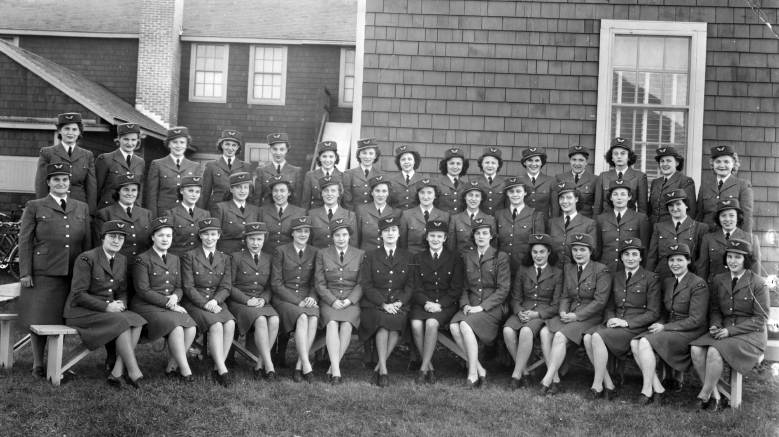 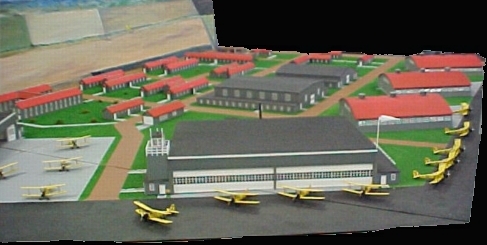 This wonderful model depicting No. 5 EFTS is the result of over two years of work
by Larry and Debra Kunz and their son Bryce of St. Gregor, Saskatchewan.
It was officially placed on display at the Society's "Salute to the BCATP" on August 25, 2002. 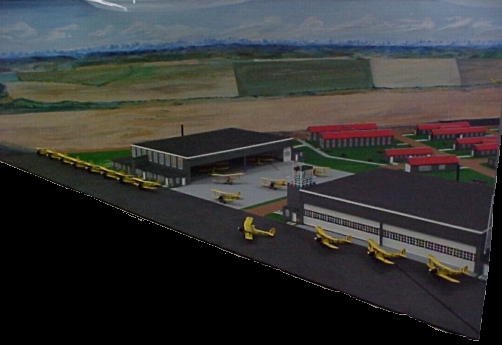 The two dozen Tiger Moth models were built by Rob Pedersen and family.
The background painting is by Pat Phillips. 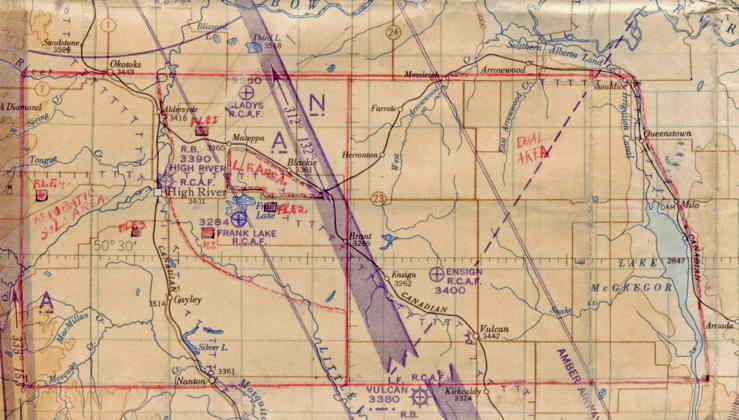 An interesting map of the area utilized by #5 EFTS at High River.