Although used primarily as a trainer when first delivered to the RAF, it served operationally in the early years of the war as a light bomber and coastal patrol aircraft. During the evacuation of Dunkirk, Ansons were used aggressively to protect the beleaguered British troops. During this operation one Anson was attacked by ten Messerschmitts but managed to shoot down two and damage a third before the action was broken off. However, the Anson was severely limited in range, fire-power, and bomb load and was soon limited to training, transport, and other non-comat roles.

The Avro Anson MK I, powered by the Armstrong-Siddeley Cheetah IX engine, was to be the standard twin-engined trainer for the British Commonwealth Air Training Plan and the British began shipping the aircraft to Canada. However byy May 1940, British production could not keep up with the demand for aircraft in Canada and Federal Aircraft Ltd. was established in Montreal to produce the Avro Anson Mk II version, powered by the Jacob 6B engine, and later a Mk V version, powered by Pratt & Whitney Wasp jr R-985 engines. Both featured hydraulic landing gear retraction rather than the manual system used on the Anson Mk I. In August 1941, the first Canadian built Anson flew. It featured the considerable use of plywood to save stocks of steel and aluminum for other purposes. A total of 1401 Mk II Ansons and 1069 Mk V Ansons were built during the war by Canadian Federal Aircraft Ltd. The aircraft played a vital role in the British Commonwealth Air Training Plan. 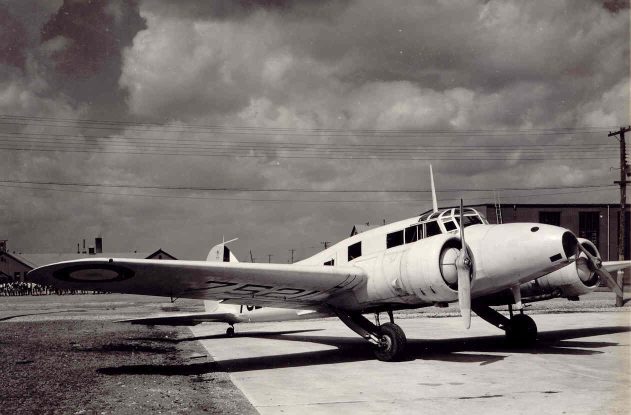 Anson II's were used primarily to train pilots to fly multi-engined aircraft such as the Lancaster. However wireless operators, navigators, and bomb-aimers used the Anson as well. As a training aircraft the Anson was docile, forgiving, and easy to fly. As will, it developed such a reputation for reliability it was dubbed "Faithful Annie", inspiring this poem which lauds the Anson's superiority over the Cessna Crane:

The wind may make her weather-cock-
That's nothing to these craft,
For when you fly an Anson
You never mind a draft.

You can keep your Moth and Battle,
Your Harvard and your Crane,
Give me the good old Anson
In which our pilots train.

When she comes in with a panel,
All split from front to rear,
And the rigger starts to fix it-
They don't need a lot of gear.

A chisel and some plywood,
Some brads and a pot of glue,
Quite a bit of elbow grease
And very soon they're through.

They wheel her back out to the line,
Her Cheetahs start to cough-
Our Anson knows they're lads to train
And she's eager to be off.

Anson II's were a familiar sight in the skies of southern Alberta during the war. All were declared surplus at war's end and many were immediately destroyed. Some were sold to farmers who used their electrical, mechanical, and other parts for various purposes on the farm. They became fantastic play areas for children and occasionally were kept as cherished relics.

Over the years these aircraft have deteriorated badly and most have been destroyed. The Nanton Lancaster Society, recognizing their historical value, has acquired some two dozen Ansons in various states. None even approaches being a complete aircraft, but each has parts and components which are being useful in the current restoration of a single aircraft for display in the museum. Restoration of an Anson is well underway. As well, it may be possible to provide aircraft for other museums. 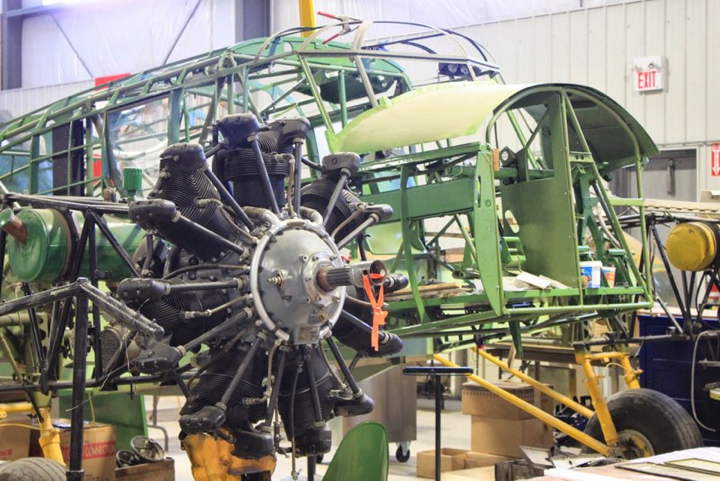 Bomber Command is in the progress of restoring an Avro Anson Mk II serial #7481. This page is a snapshot in time of the restoration. For more update progress please refer to the links provided at the end of this page. The Facebook and Blog links are updated frequently.

The Anson #7481 twin engine bomber first date of service is believed to be Jul 20 1942 and flew with No. 7 Service Flying Training School and No. 2 Flying Instructors School at Fort McLeod and Pearce Airport, Alberta in fall of 1943. This Anson was struck off the War Assets on Jan. 27, 1947 for disposal and is now being restored. The Anson Mk II was manufactured in Canada and was equipped with twin Jacobs engines. The Anson Mk II had an aluminum tubing frame and the wing and the rest of the body was made of wood.

There are several members working on the restoration project and the main subassemblies are shown in the photos below. Restoration is bit of detective work and an investigation because the museum has only a few drawings. As well, as part of the #7481 restoration project an effort is made to use as many of the original pieces as possible. Pieces are salvaged from several different Anson's that museum acquired through the years.

Nearing completion is the stabilizer. The tail section started with original pieces. These original pieces can be identified in the photo as the pieces with green paint and faded wood. Newer pieces were added as necessary as work progressed. This process ensures original dimensions and locations are kept and saving pieces that are 70 years old.

Most of the leading edge stringers and rib webbing are new.

The assembly of upper fuselage forms and stringers are in place. Each of these stringers was milled from Sitka spruce. Sitka spruce and Lime wood ( Bass Wood in North America) was predominately the wood used in the construction of the plane. 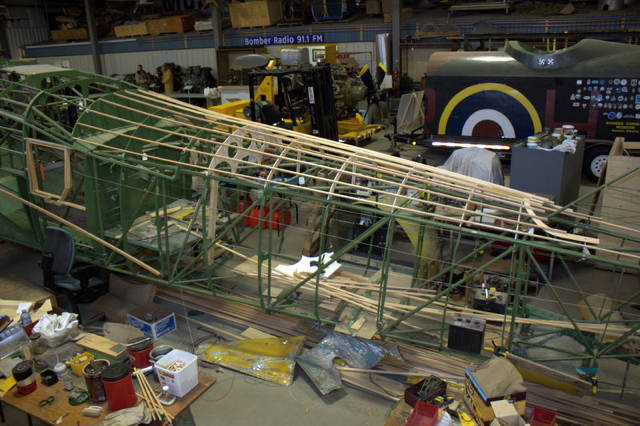 Restoration of the control cables, pulleys, and pilot controls for the rudder, elevator, and trim is underway. Shown in the photos are the cables attached to rudder pedal mechanism. The cables are feed through arms and pulleys on the underside of the plane. The other photos show the rudder cables being prepared for attachment to the rudder and the control arms used for the elevator.

We are fortunate to acquire a nearly complete section of the trailing edge. From these original pieces we are able to interrupt and extrapolate the dimensions and construction of the entire wing. 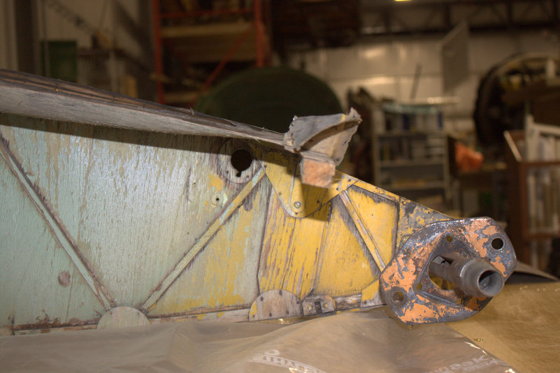 Douglas Petrie was born in Magrath, Alberta. He enlisted in the RCAF in 1941 and began his pilot training on Tiger Moths at 18 EFTS at Ladner, British Columbia. He was then stationed at 15 SFTS at Claresholm, Alberta where he received his wings after training on Cessna Crane aircraft. He was then posted to 2 Flying Instructor School at Vulcan, Alberta where he flews Cornells and Cranes and graduated as a flight instructor.

Staying in Alberta, Douglas was posted to 7 Service Flying Training School at Fort Macleod where he instructed on Avro Anson Mk. II's, completing five hundred flights during his six-month posting. Seven of these flights were in Anson 7481 that is currently under restoration at the museum.

After more instructing, this time on Cornells at 15 EFTS in Regina, Douglas was posted overseas where he flew seven operations on 425 Squadron Halifaxes. Following the war, F/Lt. Petrie returned to Canada as the pilot of a Canadian-built Lancaster. Douglas Petrie retired from the RCAF in September, 1945. 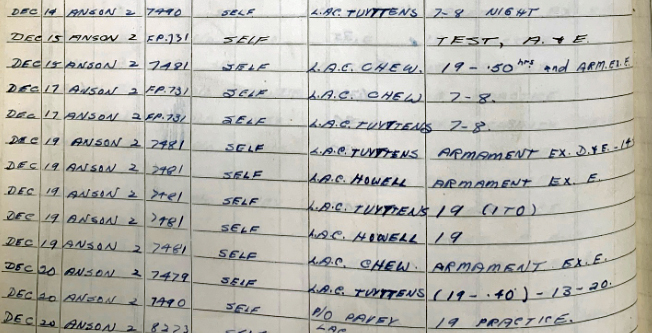 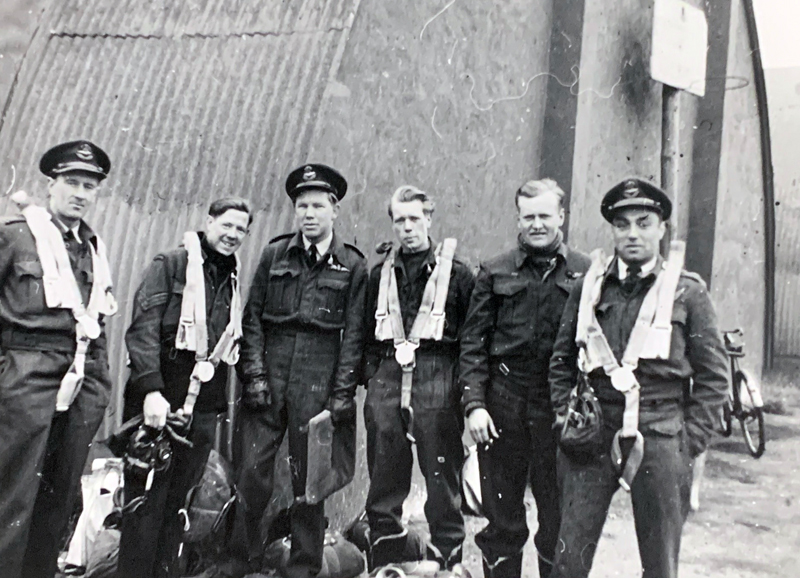 F/Lt. Petrie (third from left) and five of his crew at Tholthorpe.

We would be interested in hearing from anyone who has interest in learning more about the project, and any history of those who trained and serviced the Avro Anson. Please drop by the museum or contact us.