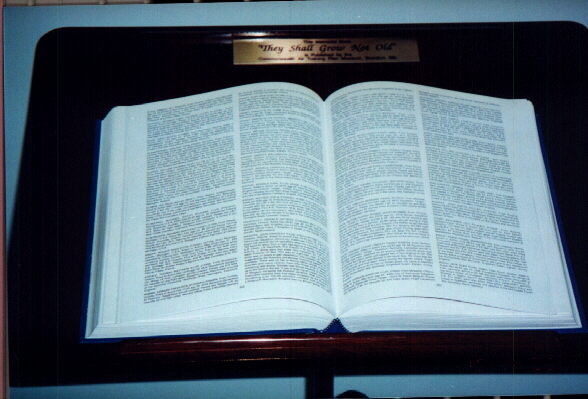 This wonderful book produced by the Commonwealth Air Training Plan in Brandon, Manitoba
lists the names and a brief biography of over 17,000 Canadians
who were killed in the air war during World War II.

Since the Society was incorporated in 1986, funding has been arranged for the construction and expansion of what is now a 37,000 square foot museum building which provides permanent shelter for our Lancaster Bomber and other aircraft, artifacts, library, archives, and displays. As well, the building includes extensive restoration shops and parts storage areas. Aircraft, vehicles, instrumentation, artifacts, tools, books, manuals, photographs, aviation art, and other display materials have been acquired or donated by numerous supporters.

This has been accomplished through the efforts of hundreds of volunteers and donations made by thousands of individuals and dozens of corporations. None of the cost of acquiring artifacts or developing displays has been taxpayer supported.

Although much has been accomplished, development and expansion of our museum, displays, and programs continues.

The Society is constantly attempting to expand its collection of aircraft and artifacts, as well as its library and archival material. Donations and advice regarding additions to our museum are most appreciated.

Our restoration shop is completely equipped with the tools and equipment required. We are working towards the restoration of all our aircraft and artifacts to their wartime configuration.

Many thousands of visitors tour the museum each year and are informed of the sacrifices made by so many in Bomber Command and the BCATP. The dedication of the Lancaster to S/L Ian Bazalgette VC DFC, the only Albertan to be awarded the Victoria Cross during World War II, brings to the attention of visitors the important roles played by Alberta and Canada.

Special consideration is made for veterans, school, and other groups which wish to visit the museum.

The Society is constantly striving to enhance the quality of our existing displays as well as develop new ones in order to do a better job of honouring those involved in Bomber Command and the BCATP.

A newsletter is published by the Society twice per year.

The Society attends airshows and other events during the year with a display designed to promote and advertise our museum.

The museum provides a selection of quality merchandise and souvenirs related to our goals.