The odds were stacked against aircrew surviving a mortal wound to their aircraft over enemy territory. The bombers often exploded or the crew had only seconds to escape exposure to fire, structural failure of the aircraft, or being trapped and unable to move inside a wildly-gyrating or spinning bomber.

Life as a Prisoner of War

Most air force POW's were kept in separate camps administered by the Luftwaffe, the German air force. These camps were labeled "Stalag Luft's."

The prisoners were treated quite fairly while in the hands of the Luftwaffe. At best, life as a POW was at least bearable until the forced marches that occurred as the war was ending. At worst, it could be degrading, depressing, and debilitating. There are many stories of Canadian POW's being mistreated, forced to live under cruel conditions, tortured, and murdered, particularly when they were held by the SS or Gestapo.

At most camps, food, while not available in quantity or variety, generally met minimum standards and Red Cross parcels, with their chocolate and other "luxuries," were delivered to the prisoners for much of the war.

Most POW's did not make any efforts to escape, learning to cope with their situation by determining to make the most of it. Although some longed to be free, statistically there was only a slender chance of escape -fewer than thirty successfully reached England or a neutral country.

Some saw the barbed wire as a symbol of security. There were no responsibilities and they could read, paint, act in plays, and sleep or eat whenever they wished. Rules were rigid but easy to understand.

One of 55 POW Camps, Stalag Luft III was the largest of the air force-only facilities. It occupied 59 acres and housed 10,000 prisoners, It was described as ideal from the captor's point of view -"Between the double wire of the perimeter fence, loose coils of barbed wire lay thick on the ground so that it was impossible to walk across the intervening space. Above the fence, at intervals of about a hundred yards, stood watch-towers on each of which was a machine gun covering the interior of the camp ... Immediately inside the wire was an area of dead ground six to fifteen yards wide, bounded by a low guard rail; if any prisoner crossed it, he could be shot without warning. At night, boundary lights lit the perimeter ... and from each guard tower searchlights swept the compounds."

The Red Cross and Support from Home

In early 1945, there were some 250,000 Allied POW's in camps throughout Germany and occupied countries. To prevent their liberation by the Russian Army, Hitler ordered that they be marched hundred of miles to the west during a very bitter winter.

Barry Davidson's experience gives some idea of what the POW's endured. On 27 January, and with the Russian army only 30 km away, Barry and the other prisoners at Stalag Luft III were, without warning, told they would be evacuating the camp in 30 minutes.

In temperatures as cold as -35 degrees, the 10,000 prisoners trudged through the snow for five days. It was an extremely difficult time for the already weakened prisoners. They had only the clothes they had acquired in the prison camps and were forced to eat poor quality, frozen food and, at times, rats and grass. A lucky few found a barn for the night but most slept in the open. Forty to fifty pound packs of supplies had to be carried. Plagued by lice and dysentery, the sick fell to the back, to be shoved along with rifle butts by the guards. By the time they reached Spremburg and boarded a train composed of cattle cars many were exhausted as well as suffering from severe diarrhea and other severe health problems and injuries.

Barry was one of the last to board the cattle car and had to be dragged on because of his weakened condition. After three days on the train during which eight of his friends died, they reached Tarmstadt.

The next leg of the journey involved walking for ten days to Lubeck. After the first day they were forced to spend the night in an open field. When they reached a prison camp in Lubeck, the senior British officer refused to allow the men to enter as typhus had broken out amongst the prisoners already there.

After marching an additional 15 km to the estate of a former German tobacco farmer, Barry and a group of prisoners were billeted in cattle barns. They remained there until they were liberated by a Scottish Tank Regiment on 8 May.

Many POW's did not survive "The Long March."

When the war ended, Lancaster crews who only days before had been dropping bombs, repatriated Prisoners of War. Each Lanc carried 25 and in 36 days, Bomber Command and other aircraft flew 75,000 ex-POW's to England. Many had been shot down while flying in a bomber and returning to England aboard another was a fitting end to their ordeal.

Exodus pilot Philip Gray recalled that as the former POW's stepped from his Lancaster onto British soil, "Some got down on their hands and knees and kissed the concrete. Others simpy burst into tears where they stood, while others lay on the grass and sobbed." 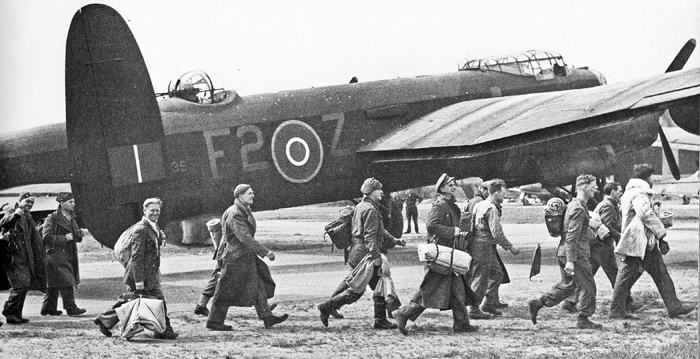