Generally there is a clear relationship between a nose art image, the name that was often directly connected to the image, the letter designation of the aircraft, and the specific aircraft (serial number).

What is clear though, is that aircraft nose art was important to Joe,
the aircrew he flew with, and likely his ground crew as well.

Joe's wartime photo collection included a picture of an airborne No. 97 Squadron Lancaster whose nose art featured a knight's helmet with two words beneath it that cannot be read. This was Lancaster R-5548 marked "OF-A". Joe flew this aircraft on a mining operation to Gdynia and twice on bombing operations against Turin in Italy. Despite the fact that this aircraft was designated "A" within the squadron, it was referred to as "A-Queenie" on the photograph that Joe placed in his logbook. Lancaster R5548 was also referred to as "Elizabeth" because she was named thus by the Queen herself in a visit to the AVRO factory on 20 March. (Another aircraft, named by the King, went to 44 Squadron and was called "George".) According to the 97 Squadron Association Website (www.97squadronassociation.co.uk), the aircraft "bore the signature of HM Queen Elizabeth in a card on the nose section, hence the aircraft was known as 'Q-Queenie' despite bearing the call sign 'A-Alpha'." It is thought that this nose art was not specifically related to Joe McCarthy and was likely painted for another pilot. 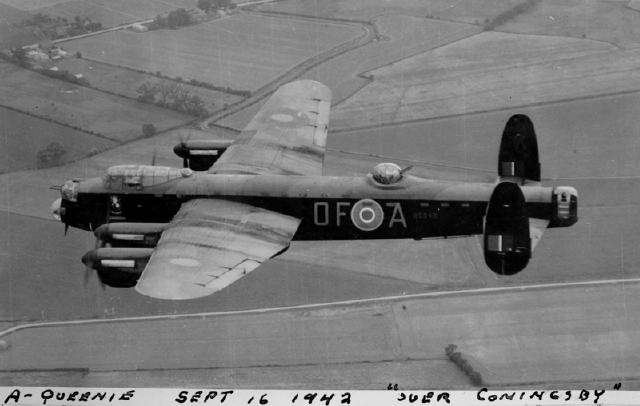 Each features a panda so it appears that this type of bear was closely associated with Joe. The reason for this is not certain but it is known that, despite his large physical stature (6'3" and 225 pounds), he was described as a "gentle giant" of a man. It is thought that the panda in the images on the aircraft represent Joe himself.

This nose art featured a panda walking on his hind legs, smoking a cigar and carrying a lighted cigarette in a cigarette holder. An American flag is included on the panda's top-hat and a Union Jack on his shirt. The significance of the design and insignia on the panda's shorts is not known but the connections to Britain (Churchill's cigar and the Union Jack) and to the United States (Roosevelt's cigarette holder and the "Stars and Stripes") is clear. 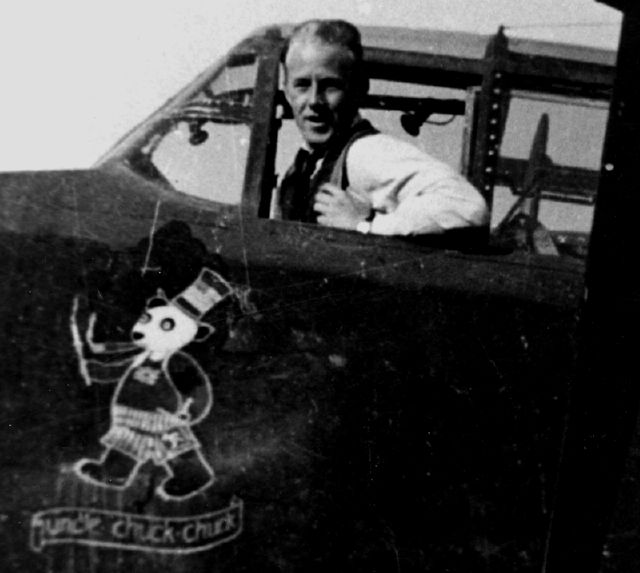 Both Image #2 and Image #3 featured a panda at the wheel of a toy car. In both cases the panda and car were painted upon a large Canadian maple leaf that formed the background. Unfortunately, the only photo of Image #2 only shows the lower part of the nose art. The wheels of the car may be seen as can a scroll that was painted below the car. The name that was painted on the scroll cannot be read. 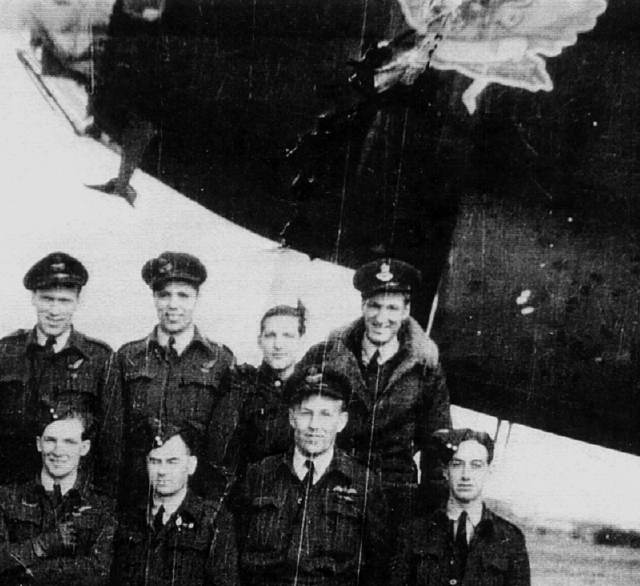 A year after this chronicle was placed on the museum's website, we were contacted by Dorothy Bailey, Bill Radcliffe's (see above caption) daughter. Bill was a Canadian flight engineer serving on an RAF squadron -most unusual. She wrote that, "I've just found your website, having done a search for Q for Queenie and found the article on Joe McCarthy's nose art. My father, William (Bill) Radcliffe, was Joe McCarthy's Flight Engineer on both 97 Squadron and 617 Squadron.

"I have a small Panda Bear about 5" high which my father had as a mascot, tucked into his boot during every flight. I have always understood that it was the mascot for the whole crew. Having seen your article I now wonder if the panda was given to my father because of the nose art or whether the panda actually gave rise to the nose art.

"All the wear on him must have happened to him whilst he was at war as he was never played with by me or my siblings. His right ear is quite worn down and his nose is threadbare! There are no tags to show who made him. It would be interesting to know if he gave rise to the nose art or if he was given to my father because of the nose art. However, I have re-read a letter which an acquaintance of ours received from Joe McCarthy some time after 1994 in which Joe has written as a postscript 'Enclosed is a picture of a panda bear, my crew's mascot on all our aircraft we flew. Bill Radcliffe returned with the panda which a young girl gave him on leave.'"

Dorothy has sent us an excellent photo of Image #2 (above) as well as a photo of the panda that accompanied the crew on all their operations, including the Dams Raid. 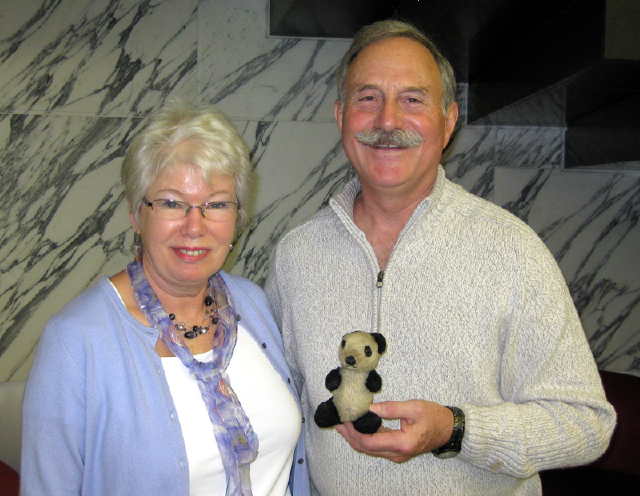 Dorothy Bailey and Joe McCarthy jr. met in England for a photo-op with the panda that went on the Dams Raid.

There is an excellent photograph of this image. The background maple leaf is quite different when compared to that in Image #2. The details of the car are clearly shown and include what appears to be a blanket draped over the front right fender and behind the panda. An insignia of some type is painted on the front left fender. As in the case of Image #2, a scroll with a name that cannot be read is painted on the maple leaf below the car. 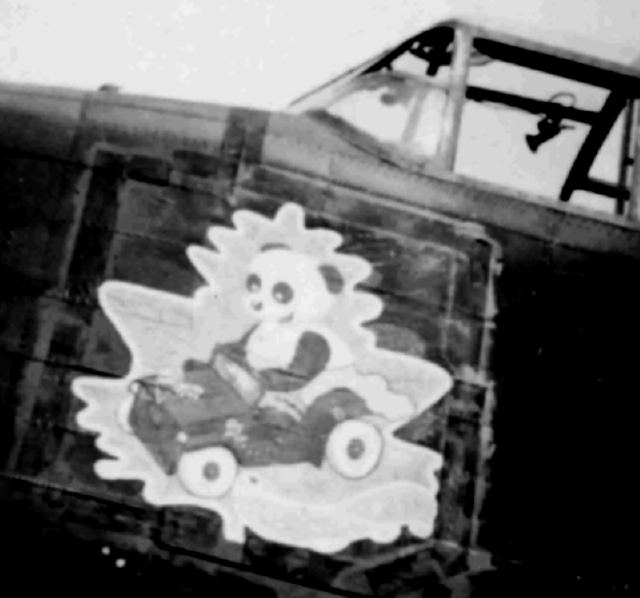 In this artwork the panda is striding along, eating an ice cream cone with what appears to be a Tallboy bomb under his arm. Again there is a scroll below the image with a name that cannot be read. 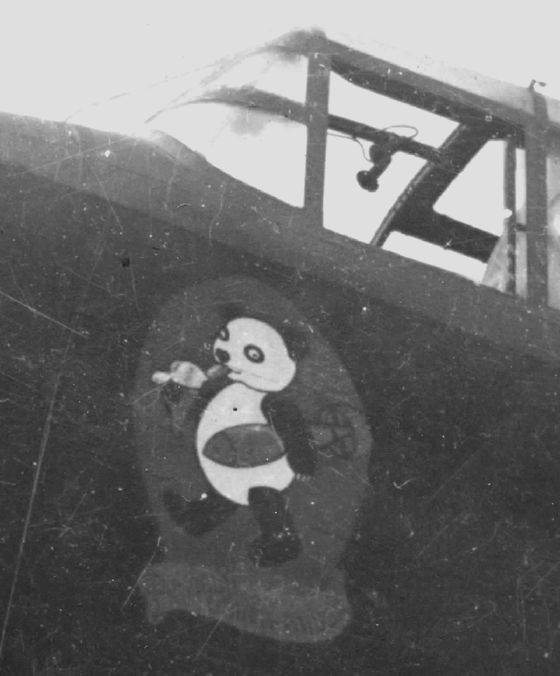 The significance of the names (Uncle, Queenie, and Chuck) is not known, nor is it clear if they were related to the aircraft designation letter of the specific aircraft. Joe's son, Joe McCarthy jr., has suggested that, "all the aircraft his father flew were referred to as 'Queenie', no matter what the side letter." Perhaps Joe's affection for the name "Queenie" was brought to the squadron from his association with "Q-Queenie" during his time with No. 97 Squadron.

According to Joe's logbook he first flew the aircraft on May 1, 1943 followed by another 11 times up until 14 May. After the Dams Raid he flew the aircraft another 46 times through December 1943, although never on operations. Joe jr. has been told that he, "sort of looked upon it as his own private aircraft."

With the aircraft designation letter "Q", this may have been "Queenie Chuck".

This was the "spare" aircraft that Joe McCarthy flew on the Dams Raid. It was marked "AJ-T".

Between 15 and 29 July 1943, McCarthy flew three operations against Italian targets in Lancaster EE-148 that was marked "KC-U" (The code letters for No. 617 Squadron had been changed from "AJ" to "KC"). These sorties all involved one-way trips between England and North Africa with the targets attacked along the way. EE-148 was then transferred to No. 626 and subsequently lost during a raid to Mailly-le-Camp on 3/4 May, 1944.

With the aircraft designation letter "U", this may have been "Uncle Chuck-chuck".

Designated "KC-R", Joe flew this aircraft on an operation on 16 September, 1943.

Joe flew 13 operations in this aircraft (marked "KC-Q") between 22 December, 1943 and 25 March, 1944. After having its markings changed to "KC-Y", the aircraft was flown by S/L D.R.C. Wyness DFC to northern Russia on 12 September 1944 from which it was to be part of an attack on the Battleship Tirpitz. However, upon landing at Kegostrov Airfield, ME-559 crashed through a boundary fence after skidding on wet grass. It has been reported that the Russians managed to repair the Lancaster and it went on to see service with the Soviet Air Force.

Joe's crew participated in the first Tallboy operation of the war, an attack on the Saumar Railway Tunnel, just two days after the allied invasion. The Tallboys dropped by No. 617 caused landslides that covered the tracks and one direct hit collapsed the tunnel, stopping the supply of enemy troops and supplies reaching the Normandy coast from southwestern France. S/L McCarthy was flying ME-559 for this raid.

Image #4 that shows the panda with a Tallboy Bomb under his arm may have been painted on Lancaster ME-559 after Joe began the Tallboy raids or possibly on LM-482 or DV-246.