Duisburg
The Canadian Squadrons' Busiest Day of the War

On 13 October 1944, Arthur Harris received a directive for what was referred to as 'Operation Hurricane'. It's purpose was, "In order to demonstrate to the enemy in Germany generally the over-whelming superiority of the Allied air forces in this theatre."" Duisburg, in the Ruhr Valley, was selected to be the target. A raid by 1013 bombers during the day on 14 October was followed by a force of 1005 bombers during the following night of 14/15 October.

The Canadian Squadrons were very much involved, contributing about one quarter of the force that Harris dispatched. The challenge to all components of the stations was that, after returning from the daylight raid, all the aircraft had to be refuelled and rearmed to set off for a night raid.

In the first attack, the Canadian Squadrons contributed 273 bombers from thirteen of its squadrons, taking off shortly after 6:00 AM and returning about noon. As the aircraft landed, the ground crew immediately got to work servicing, refueling, rearming, and bombing-up the aircraft for the upcoming night operation. The mounting of a second operation so soon was a challenge for all the Bomber Command Squadrons but none more so that those of 6 Group. With their airfields in North Yorkshire and Durham, they spent longer in the air than the RAF squadrons and so had less time on the ground prior to taking off again in the evening.

The Canadians amazed the rest of Bomber Command when they trained clerks, cooks, and other trades to assist on the flight line and, with their help, the job was done on time.

267 RCAF aircraft participated in the night attack, taking off shortly after 10:00 PM.

The two raids created chaos in Duisburg, destroying about half of its key industries, demolishing the railway station and dock facilities, and seriously damaging the airport.

As the following ORB's show, following their huge efforts to contribute to the Duisburg raids, the Leeming-based squadrons (424 and 427) were called upon for another operation the following night as 278 RCAF Squadron aircraft attacked Wilhelmshaven. As an example of the effort by the aircrews, 427 Squadron pilot F/O J.T. Hardy and crew recorded three operational flights and 16 hours and 42 minutes of operational flying within a forty-hour period. 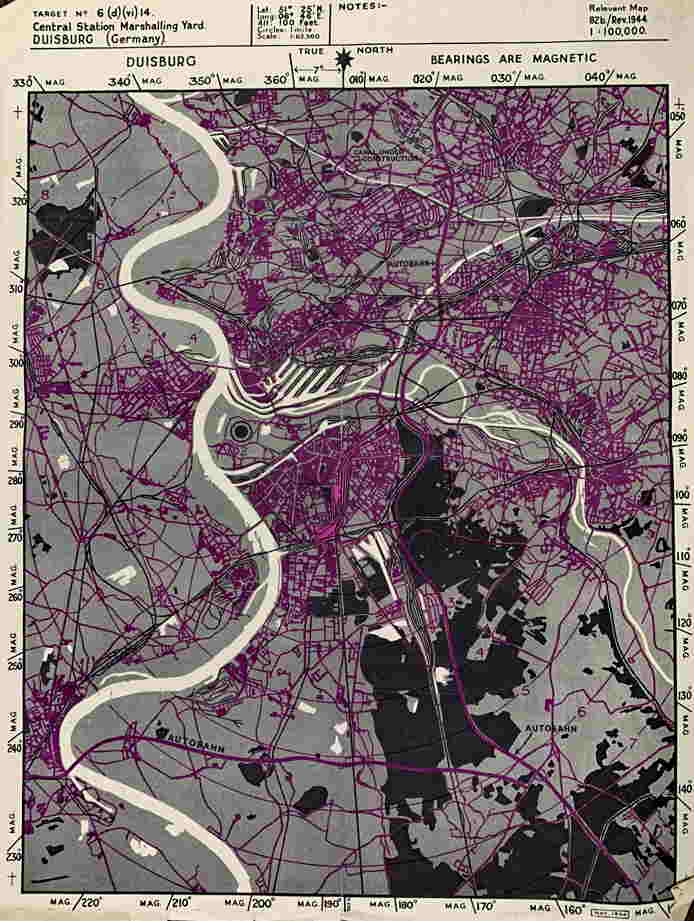