Battle of Berlin - The Big City

In 1944, Berlin had a population of 4,000,000 people. It was the second largest city in Europe and the capitol of the Third Reich. A major industrial centre, Berlin produced iron and steel, machine tools, chemicals, tanks, guns, and aircraft. Arthur Harris saw it as the ultimate target for Bomber Command and he unleashed a relentless attack. The bomber aircrew referred to Berlin as 'The Big City'.

405 Squadron Halifax.
The container under the nose is an overload fuel tank, fitted in the bomb-bay for long flights such as those to Berlin.


"Berlin was an angry, glaring, writhing enormity of a target. We rarely caught a glimpse of the city beneath the unbroken cloud cover, but there seemed to be thousands of searchlights. Often, they did not move, but pointed upwards and illuminated the clouds. It was like flying across a vast, bubbling cauldron into which was poured the sky-markers and above which burst the 'scarecrow' flares. (Many Bomber Command aircrews believed that scarecrow flares were being used by the Germans to deceive them into believing they were bombers in flames. We have since discovered that there were no 'scarecrow' flares, only exploding and burning aircraft.)

"It was a target so bright that the bomber stream could be seen above, below, and around you. One was part of a vast armada of aircraft moving relentlessly across the target. Bomb doors could be seen opening. The black crosses on the fighters were clearly visible as they dived into the bomber stream, oblivious to the bursting flak, whose muffled crump could be heard above the roar of our engines."

A bomb-aimer wrote of Berlin, "The run-up seemed endless, the minutes of flying 'straight and level' seemed like hours, and every second I expected to be blown to pieces. I sweated with fear, and the perspirations seemed to freeze on my body."

Of a raid to Berlin, 405 Squadron navigator S/Ldr Powell recalled, "The moonlight, searchlights and fires made the scene almost a daylight raid, and the fighters were as thick as flies. But it's a thrilling sight to fly above a blazing city and see our bombers come streaming in . . . It's a sight you never forget -the bright bomb bursts, freshly-laid incendiaries breaking into flames, colourful target sky markers, the city burning, smoke rising, illuminating chandelier flares dropped by enemy fighters, crimson tracer exchanges between aircraft, and all around the flak, searchlights and fighters." 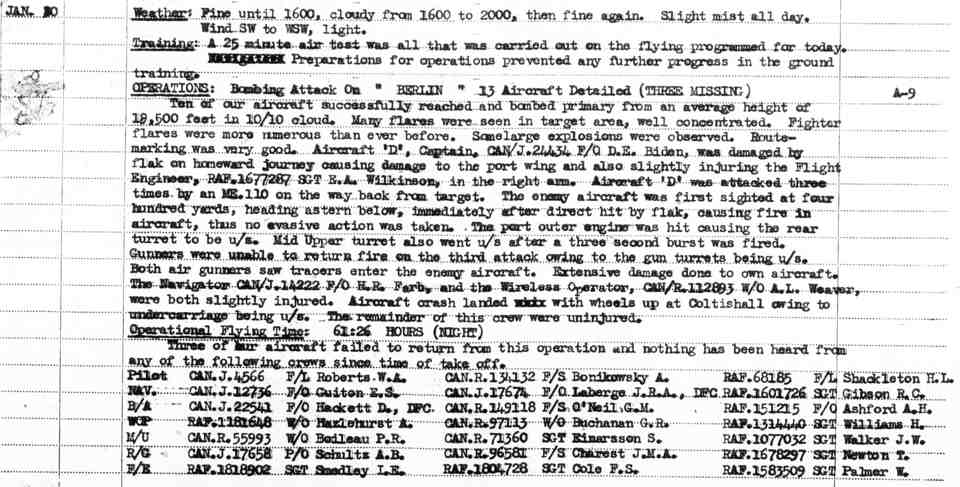