Bert Evans was born in Sault Sainte Marie, Ontario on 29 March 1923 where he went to school. From his early years he showed creative talent in drawing and calligraphy. In 1943 he left school and joined the RCAF, reporting to NO. 1 Manning Depot in Toronto. Following initial training he was posted to No. 4 Bombing and Gunnery School and lastly to No. 1 Air Navigation School where he received his bomb-aimer's wings.

His overseas posting took him to Bournemouth in England, followed by survival training in Scotland. His advanced flying school was located in Dumfries and from there he was posted successively to the OUT at Honeybourne and then to the Heavy Conversion Unit at Topcliffe. Finally, he and the rest of the crew were ready for operations and they were posted to 408 (Goose) Squadron at Linton-on-Ouse in Yorkshire. There they were assigned Halifax B Mk VII, PN230, which received the code EQ-V.

For some time the crew could not find a good name for their aircraft, then discussions among the crew regarding their amorous adventures in England led to the conclusion that "if there's a virgin left in England she must be a very vicious lady" and so their aircraft found her name: "Vicky the Vicious Virgin". This was painted on both sides of the nose in large red white-outlined letters.

The nose still required a pinup and Evans recalls "I had attempted to obtain oil paints on the base, but they just gave me a strange look and told me to get lost. While on leave in Leeds I walked past a small sign painting shop and decided to ask about oil paints These were a very rare item in England, but the owner was most kind and supplied me with small tins of all the basic oil colours. On return from one of our operations we were diverted to an American air base due to bad weather at Linton-on-Ouse. To kill some time, I decided to get an American haircut and while the barber worked, I noticed a good-looking pinup lady on the wall. I mentioned this to the barber and how good she would look on our Halifax bomber and upon leaving the barber handed me the photo of the topless lady. In the next two weeks I painted her on the port nose of our aircraft and she became "Vicky". The painting became a joint effort with me on the ladder and pilot Ron Craven below directing with "bigger eyes", or "more hair". Even the padre got into the act suggesting "more clothes".

We completed 21 operations, the last thirteen in "Vicky" and then converted to Canadian-built Lancaster Mk X's May 1945. I then painted a new "Vicky the Vicious Virgin" on Lancaster KB905." 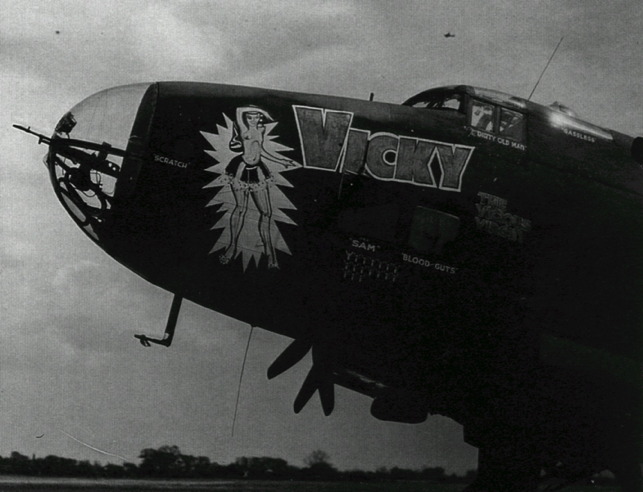