Thomas Dunn was born in Winnipeg, Manitoba on 23 December 1912. During his high school years, he enrolled in a correspondence course on hand lettering and show card writing. In order to gain experience, he also took up extra work on small signs, trucks and large wall advertisements. On 31 October 1941, he put away his brushes and joined the RCAF. He was first posted to Brandon, Manitoba for basic training after which he was posted to the depot at St. Thomas, Ontario to undergo training as an aircraft mechanic. After postings to Aylmer, and Rockcliffe, both in Ontario, he ended up in Debert, Nova Scotia where he remained until late 1943 when he was posted to join 6 Group, Bomber Command, in England.

On arrival in the UK, Sergeant Dunn joined 432 (Leaside) Sqn at East Moor in Yorkshire where his artistic talents were soon discovered. He completed his first pieces of nose art in the spring of 1944, his creations being, "Moonlight Mermaid", "Oscar the Outlaw", "Old Joe Vagabond", "Queen of them All", and "Leaside Lulu". He twice painted a very symbolic piece of nose art with a verse from Luke 3:5 of the New Testament: "Every valley shall be filled and every mountain and hill shall be brought low".

Halifax VII, QO-R, serial no NP694 was assigned to 432 Sqn 24 June 1944 after completing sixty-five successful operations with another RCAF squadron. After the lettering had been applied, the crew said that they wished that they had added some artwork so Tom removed the lettering and began again. The new nose art consisted of light blue cloud with three yellow lightening bolts coming from it, passing through a cross and carrying on to strike a swastika and a factory. NP694 completed thirteen operations with 432 Sqn, finishing the war with a grand total of seventy-eight missions. At the end of her tour, NP694 was flown to No. 45 Maintenance Unit and scrapped shortly after.

Tom was now to paint the same nose art on two Halifaxes, each of a different squadron. The first "Willie the Wolf" was painted on Halifax VII, QO-W, serial no NP707 in July 1944. NP707 completed 67 operations with 432 Sqn before being flown away to disposal on 29 May 1945 by P/O Harold Kearl. The nose art from this aircraft was one of those selected for saving by F/Lt Lindsay and on 10 June 1976, was placed on display in the Officer's Mess at Gloucester St, Ottawa. Today, this nose art panel is part of the Canadian War Museum collection. The second aircraft to receive "Willie the Wolf" artwork from Tom was Halifax VII, 6U-W, serial PN240 of 415 (Swordfish) Sqn RCAF. It completed 42 operations before being scrapped at High Ercall in May 1945. 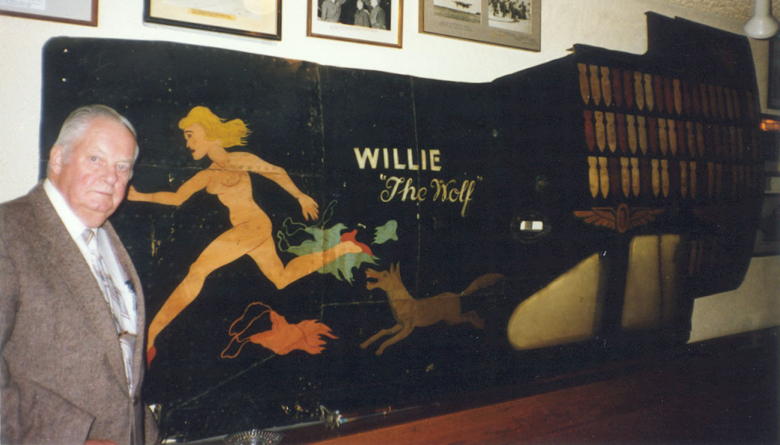 Thomas Dunn with the original Willie the Wolf 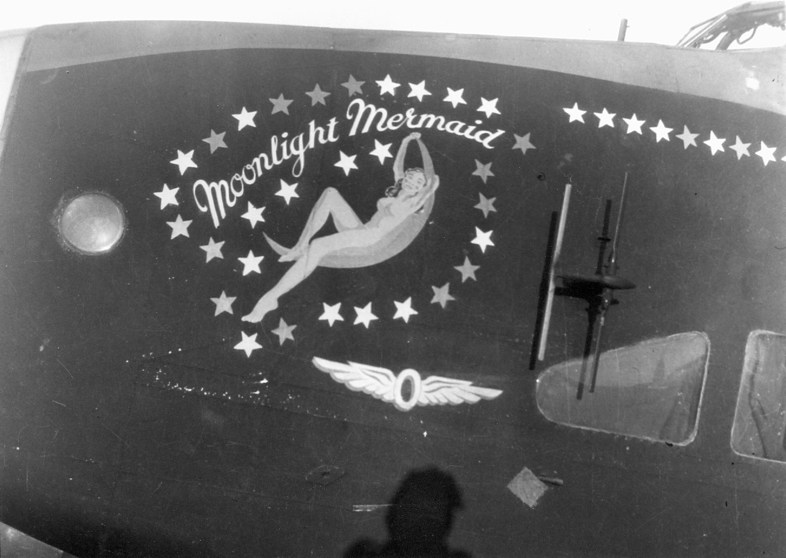