A Tribute to RCAF Ground Crew
by Clarence Simonsen

With losses from training accidents mounting, the Air Force was anxious to find a means of bringing flight safety issues home to the young and inexperienced aircrew who made up much of the RAF's front-line strength. The style of the new magazine was to be witty and easily readable. It needed illustrations, and the publishers seized on the dim-witted, bonehead Prune as the perfect example of how not to do things. Prune used humour to demonstrate how to handle situations -the wrong way.

P/O Prune came up with catchy expressions such as, 'A good landing is one you can walk away from' and was rapidly promoted from thumbnail sketch fillers to a major element of the magazine's message.

During October 1941, training publications for ground crew introduced some new Percy Prune types called 'Plonks' whose purpose and style were similar to those of the P/O Prune character.

Clarence Simonsen has painted, and donated to the museum, illustrations of several of the 'Plonk' characters to honour the ground crew ('The Plonks') of the RCAF. They were painted on original WW II aircraft skin from a WACO 'Hadrian' glider. 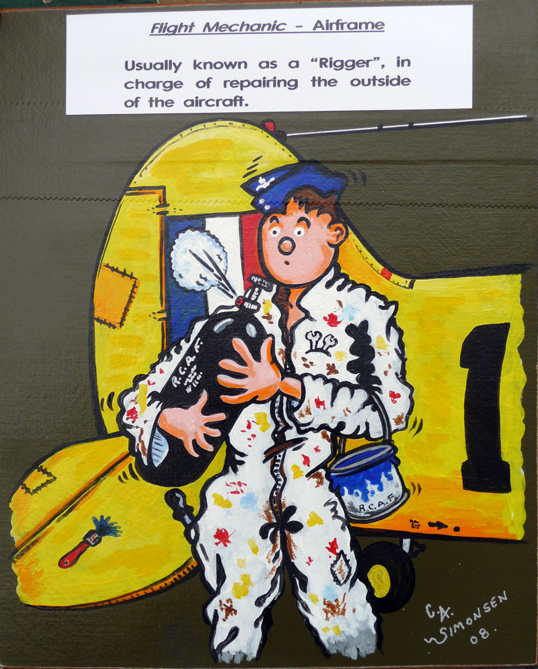