During the early years of the war, Bomber Command crews operated largely by night and often over layers of cloud.
Navigation was generally by the stars and 'dead reckoning' -using compass, air-speed, and assumed wind direction and velocity.
As the war progressed and bombing by night continued,
the development of technological devices was rapid, as were enemy countermeasures.

The green and red lines on this GEE map correspond to the pulses generated by the ground-based transmitters.
The navigator has plotted his course on the map.

WINDOW was the most successful technique devised to jam enemy radar systems. It involved large volumes of small strips of metal foil, cut to a specific length. This disbursed from bundles that were dropped at designated locations along the route to the target, producing a confused response to enemy radar pulses. WINDOW was first used on a highly successful attack on Hamburg during July 1943.

Utilized by the Pathfinder Force, OBOE became operational in 1943. It utilized two ground-based radar stations to guide a single bomber (generally a Pathfinder Force Mosquito at high altitude) to its target.

OBOE was very accurate, but like GEE, limited in range. 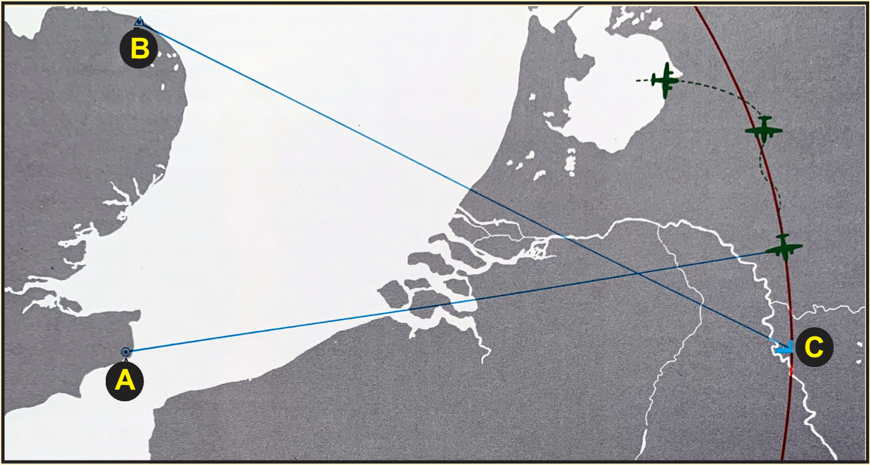 A bomber guided by OBOE flies along a circle centred on point 'A'.
The radar station there signals the pilot when he is on course. A second radar station at 'B' also tracks the aircraft.
When the bomber reaches a prearranged distance from 'B',
the station there tells the pilot that he is over the target factory, 'C', and should drop his target markers.
The main force bombers then attack the target.

As H2S was implemented, the operators noticed that sometimes fleeting echoes were visible and concluded that these were from other aircraft.

FISHPOND was then developed to work in conjunction with the H2S downward-looking radar to detect enemy fighters that normally approached from below the bomber, generally unseen due to the lack of a mid-under turret on almost all Bomber Command aircraft.

Introduced during the spring of 1942, MONICA was a radar system that alerted bomber crews to fighters approaching from behind. Unfortunately, the enemy quickly developed a passive radar receiver which was used to hone in on bombers using Monica.

During July 1944, a Luftwaffe fighter mistakenly landed at an RAF station. After examination of the radar systems on board, Monica was removed from all Bomber Command aircraft.